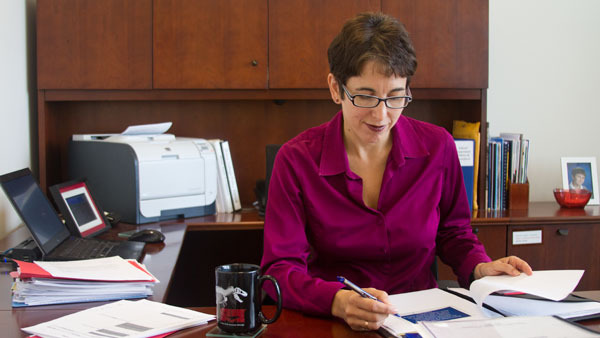 Kelly began her current position at the college in 2011 after being recruited from her former position of dean and McQuinn Distinguished Chair of the College of Arts and Sciences at the University of St. Thomas in Saint Paul, Minn. While serving at St. Thomas, Kelly spent two years working under Tom Rochon, current president of Ithaca College, who at the time was executive vice president and chief academic officer at St. Thomas.

During her three years at the college, Kelly has been an active part of the IC 20/20 strategic planning process. Rochon said Kelly was a key player in the implementation of both IC 20/20 and the Integrative Core Curriculum.

“She’s been an incredibly effective provost for Ithaca College,” Rochon said. “The IC 20/20 vision is really demanding and has meant making some path-breaking programs, especially the Integrative Core Curriculum. Although she wasn’t here as long as I would have liked, she was a very effective leader in getting many of those programs off the ground.”

When Kelly began at the college, she was provost and vice president of academic affairs. However, when Brian McAree, former vice president of student affairs and campus life, retired in August 2012, Kelly took on his responsibilities. Kelly said the restructuring gave her the chance to work with a wider portion of the campus community.

“I think that, for the institution, it has been a great opportunity to build on what was already good collaboration between academic and student affairs,” Kelly said. “I think that organizational structures can get in the way of things at every institution.”

As provost, Kelly oversees the deans of the five schools. Diane Gayeski, dean of the Roy H. Park School of Communications, said she has enjoyed reporting to Kelly during her tenure.

“I’m very sorry to see her go,” Gayeski said. “As someone who I’ve reported to for the past few years, I’ve found her an excellent administrator. She’s been very supportive of my initiatives here at the Park School.”

“She brought an evenness and level-headedness to the position that I would hope we can replicate,” Rothbart said. “I think there has been a sense of trust and honesty that has developed between us, and also I think between her and the campus.”

As the head of student affairs, Kelly has also been directly involved with student issues on campus. Cedrick-Michael Simmons, president of the Student Government Association, said Kelly has been the most accessible member of the President’s Council.

“In terms of my interactions as president with her, and the work we’ve been trying to do as it relates to diversity inclusion, she has been one of the most helpful people, one of the few people in administrative positions that actually listens and was willing to engage and was willing to acknowledge that we have room to grow,” Simmons said.

Despite her relationship with the campus community, Kelly has been looking at other positions for the past few months. In February, Kelly was named as a finalist for the position of chief academic officer at Curry College in Milton, Mass. U.S. News and World Report ranked Curry College below the cutoff for its list of the best schools in the northern region of the country. Curry College has an undergraduate enrollment of about 2,700.

Though Kelly’s provost position at Suffolk University will involve similar academic responsibilities, U.S. News ranks Suffolk, which has an undergraduate enrollment of about 5,700, as No. 60 on its list of the best schools in the northern region of the country, whereas Ithaca College is ranked No. 8.

Though she said she is sorry to leave the college, Kelly said she wanted to move to an institution in a more urban area because of the opportunities a city presents to education.

“As much as I’ve loved my time at Ithaca College, I’m excited for the opportunity to be at a truly urban institution,” Kelly said. “Suffolk is literally in downtown Boston and is able to really maximize the educational experience that being in downtown Boston affords its students.”

Over the course of the next few weeks, Rochon said, he will work with faculty leaders, deans and associate provosts to find an interim provost. He said the interim provost will serve for one academic year, and in the fall a search committee made up of faculty, administrators and students will search for a full-time replacement.

Though Kelly’s position is more than she expected when coming to the college, Rochon said the committee will not divide her position back into academic and student affairs.

Though Kelly said she is excited to move to a new position, she will be leaving before the ICC has been fully implemented. Rothbart said though Kelly won’t see the end result of the vision, the core curriculum will still continue to evolve in her absence.

“It’s unfortunate that she’s leaving before ICC is fully institutionalized, but the natures of institutions are such that the work will get done one way or another, and we’ll see where it goes from here,” he said.