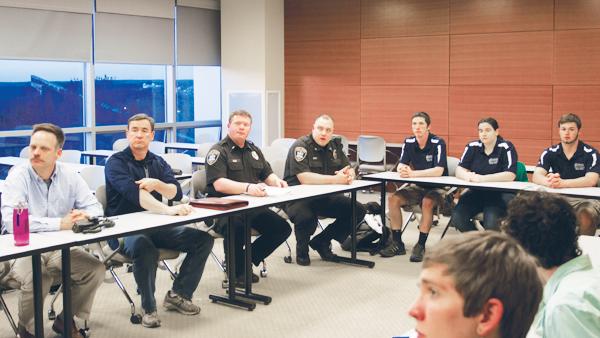 Tucker Mitchell/The Ithacan
The Office of Public Safety along with other organizations held a forum Tuesday where students could ask questions and have a dialogue with safety officials.
By Kelsey O'Connor — Editor in Chief
Published: May 2, 2013

It’s no secret that half the reason why anyone picks up The Ithacan is to read the Public Safety Log, either looking for names of friends or just to muse over the strangest crimes of the week.

Looking back at the past academic year, some of the most common occurrences reported in the Public Safety Log were fire alarms, criminal mischief, larceny, medical assists and found property. To keep the community aware of trends in incidents on campus, this week The Ithacan launched a searchable Public Safety Log database, a new ongoing interactive that is more accessible than the weekly list of logs on page nine. It is sortable by crime, date and location and will be updated weekly.

Also this week, in what might be the first of many opportunities for dialogue, the Office of Public Safety held an open forum, titled Conversations With Public Safety, where students could ask anything to college safety officials.

The event was a partnership among Students for Sensible Drug Policy, the Student Government Association and the Center for Health Promotion. Questions of how crimes are classified, student privacy, the Clery Act and why Public Safety discloses the amount of information it does were put on the table.

The evening kicked off with a game where everyone in the room answered questions on the back of recycled paper: “What is the general perception of Public Safety on campus?” and “Why are you here? What do you want to gain from coming here this evening?”

Most responses indicated that Public Safety is meant to keep the campus safe and that participants were at the forum to learn.

One of the first topics brought up was about chalking policies on campus, from which there was no real conclusion. After this discussion, the meeting grew more tense when freshman Jacob Greenberg, also an Ithacan reporter, brought up the recent “threatening graffiti” in Friends Hall, reported on April 20. He asked why the contents of the threatening message could not be released to the community.

“When something is written that you guys feel is dangerous to us, so you alert us and let us know, I personally feel like if I don’t know what was actually said, I’m not actually alerted of anything,” Greenberg said.

Dunn replied that the reason some information is not released in the process of investigation is because it ensures that only involved people know the contents of the message.

Stewart also said if something was an imminent threat that required evacuation or taking shelter, and it was confirmed by Public Safety, that would no longer fall into Public Safety Alert territory but would be put out in an institution-wide emergency notification.

Another topic discussed was the privacy of belongings and of students when Public Safety or an official wants to enter a room. The overarching message was “constitutional rights don’t go away.” Under most circumstances, Public Safety cannot enter a room without permission.

Stewart said thefts, harassment and graffiti remain some of the most common crimes on campus.

“In my experience, those haven’t changed in the last 10 years,” Stewart said.

With evolving technology, she said, there are more venues for harassment. She said cyber theft is also becoming a hot topic of discussion.

Sophomore Adriel Miles, a co-president of SSDP along with junior Tori Gates, said the event was helpful because students could open a dialogue with the people who are trying to protect them.

“A big goal of this was to put a face to the name ‘Public Safety’ and see that these are actual people, and you can interact with them when you have concerns, and they care about you,” Miles said.

Stewart said she hopes to have more sessions for dialogue over time because, though the forum was an hour and a half long, the discussions “only scratched the surface.”

“You’ve got to stay connected,” Stewart said. “People have to come and feel that they’re safe and get to say what they want to say, and we’re accountable. I think the dialogue needs to be a little difficult.”