Q&A: French clarinetist fills in for professor on sabbatical 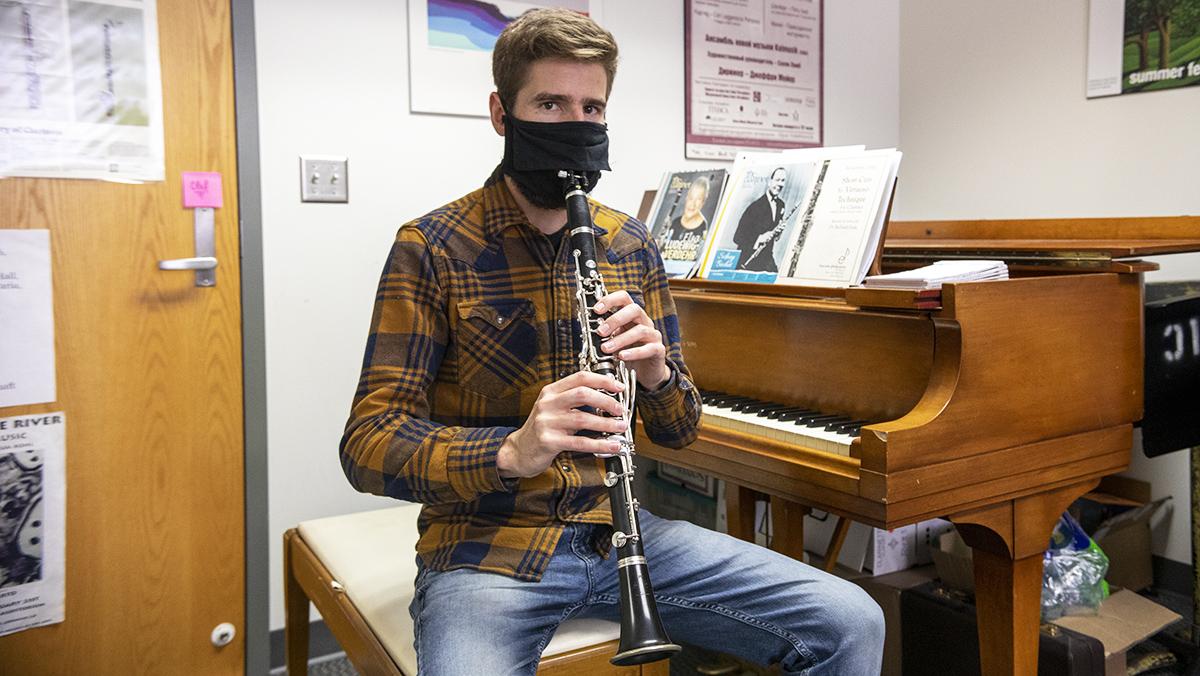 Kalysta Donaghy-Robinson/The Ithacan
Originally from France, Louis Arques, Ithaca College lecturer in the Department of Performance Studies, is currently filling in for Richard Faria, professor of clarinet performance, who is on sabbatical for Spring 2022 to work on his writing.
By Joshua Pantano — Contributing Writer
Published: March 9, 2022

Originally from France, Louis Arques, Ithaca College lecturer in the Department of Performance Studies, is currently filling in for Richard Faria, professor of clarinet performance, who is on sabbatical for Spring 2022 to work on his writing.

Although primarily a clarinetist, Arques also sings, conducts and runs orchestra and chamber ensembles. After moving to the United States with his partner in 2016, Arques earned his master’s degree in clarinet performance from Mannes School of Music in New York City. He will continue teaching Faria’s classes for the remainder of Spring 2022.

Contributing writer Joshua Pantano spoke with Arques about his background and his experiences filling in for Faria.

Joshua Pantano: What made you start with music in the first place? Was there anyone in your life who inspired you?

Louis Arques: My mom. She is this semi-professional singer, and so she was the one who took my brother and I to music school when we were kids. And I was not really serious about it. It was just more like anything else you do when you’re a kid: you go and do soccer or whatever activity you have. But then my friends and my brother were getting more serious about it, so I decided I would do that too.

LA: I started clarinet when I was turning seven. But as I said, I was just not so serious about it for a while. But then probably when I turned 12 or 14, around that time, it started to become more and more important. And I started teaching when I was 18 in my hometown, and then I moved to Paris; I taught there for six, seven years. Then I moved to New York City [and] taught there for a few years. And now I’m here for the semester. I’m still teaching in New York City, but with COVID[-19] and online reality, I’m teaching almost everywhere. I have students in Alaska and Philadelphia and Washington, D.C., in New York City and France.

JP: What’s it like being here at Ithaca College?

LA: I’m really happy … I’m stepping in the shoes of someone who has put everything together so nicely. Richard Faria has been fantastic and welcoming. First of all, inviting me to sub for him and putting everything in place so that I would … have an easy settlement. Everything has been really smooth. All the students I’m in contact with are really passionate … and they make very incredibly fast progress. I barely say something and the next day, they’re just there already. It’s a wide span of levels and interests for them because some of them are leaning toward performance. Some of them are doing more music education. Some of them are doing both … It’s a very diverse environment of students, but all of them at their own position are incredibly fast at making progress and coming back at me with more questions and more enthusiasm. It’s really fun. And the colleagues here, the ones that I have had the opportunity to meet, have been really welcoming and warm, and we have nice conversations. It’s a really good environment.

JP: Do you have anything planned for the future while you’re here? Any events or concerts?

LA: One of the people I’ve been collaborating with here is James Spinazzola. He’s teaching saxophone and conducting at Cornell University. So with him, and thanks to him, I started teaching saxophone at Cornell. We’ve done a collaboration with the Cornell Wind Symphony. He arranged one movement of Wynton Marsalis’ Violin Concerto for the clarinet and woodwind ensemble. So we performed that with the Cornell Symphony, the wind symphony, two weeks ago, for a conference at Peabody Conservatory. We recorded it, and it was sent out to Peabody, and we’re doing it again next Thursday here at Ithaca with the Ithaca Wind Ensemble. It’ll be March 10 at 8:15 [p.m.]. So yeah, that’s what’s happening here. I had many students who had recitals, so it was a really eventful start of the semester.