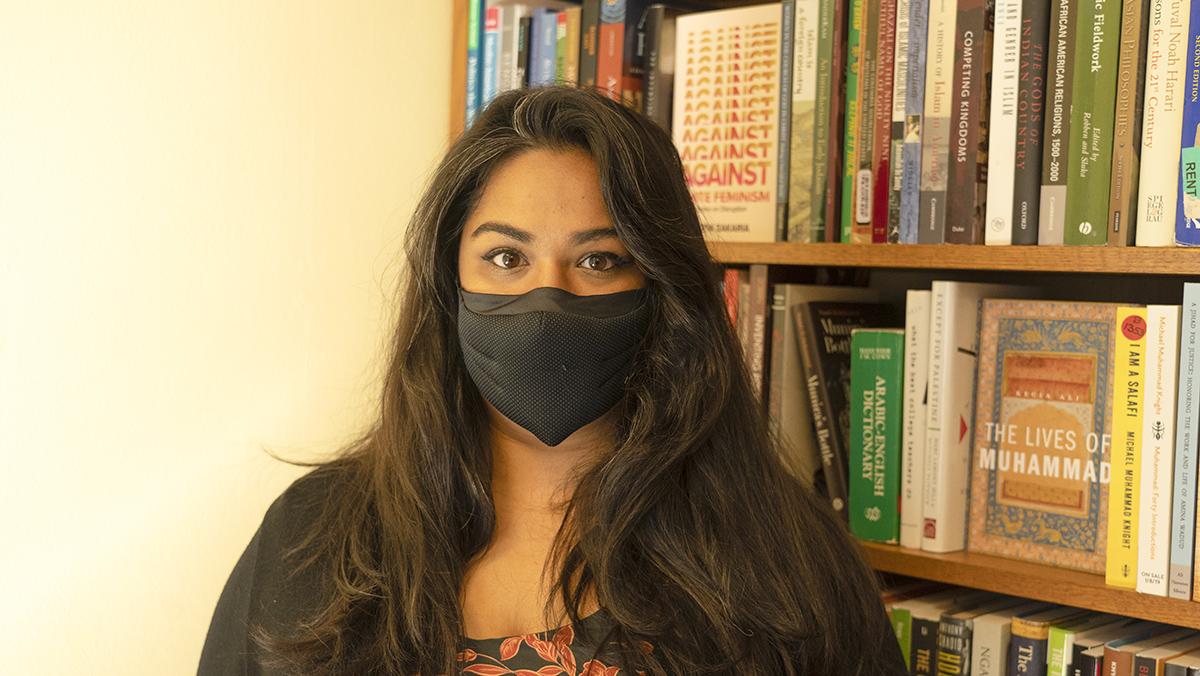 Samah Choudhury, assistant professor in the Ithaca College Department of Philosophy and Religion, has received the first place “Young Scholars Award” from the Institute for Social Policy and Understanding (ISPU), an annual award that recognizes “emerging leaders whose research focuses on American Muslims.”

The ISPU is a nonpartisan, non-profit organization focused on research and education about American Muslims in an effort to provide a better understanding of the community and to support a well-informed dialogue.

Staff writer Mel Andia spoke with Choudhury about her research.

Mel Andia: Can you give a brief overview of your work?

Samah Choudhury: My research looks at the way that American Muslims … self articulate themselves through … humor … I think there’s this association that people already make … Muslims are stoic, they’re unfriendly, they’re stubborn, they can’t take a joke. So there’s … points in our recent history that really undergird this assumption … The debates that usually follow … typically seem to boil down to two questions: why is it that Muslims can’t take a joke, and does that mean that Islam is therefore incompatible with modernity … For me, it becomes a bigger question of how is it that humor … has become a principle of modernity.

MA: You focused your work on the case studies of Hasan Minhaj, Kumail Nanjiani and Aziz Ansari. Was your focus on male comedians a specific choice or the result of there being few high profile Muslim women in comedy?

SC: It’s no accident that it’s these three men. Minhaj was on “The Daily Show” originally, … which led to the special that he had on Netflix … Nanjiani starts off on Comedy Central … and now he’s going to be the next big superhero in a Marvel movie … And Ansari was on “Parks and Recreation” for many years. … The high profile nature of these three men is something that hasn’t been mirrored among other Muslim comedians and certainly not Muslim women comedians. … The comedy world is … a man’s world. There are women comedians who speak to that effect very eloquently … but also the fact that there’s a certain type of Muslim [that] I think people want to see and Muslim men seem to embody that myth in a way that women just don’t.

MA: What was the most important takeaway you found from your research?

SC: The most important takeaways for me are the way we think about and talk about religion and race in the contemporary United States, and that’s what my project is trying to get at. The way that these men perform Islam, embodying themselves as Muslims in their comedy onstage … is in a way that really blurs the lines between race and religion. … These men are trying to speak to [the current political climate] trying to understand and combat anti-Muslim hostility in that way. It also ends up reconceptualizing what we mean by religion. Is religion the same thing as race or is there something different happening here?

MA: Comedians are never described as a “Christian comedian” but for Muslims, they are always presented as a “Muslim comedian” first. Why do you think this divide appears?

SC: The fact that we don’t refer to people as “Christian comedians” or even “white comedians,” [means] we’re under the assumption that whiteness is … a default. Meaning that when we are referring to comedians via their religion, it’s usually with respect to Muslims. Even Muslims who are Black don’t get coded as Muslim comedians. Many people don’t know this but Dave Chappelle … is also Muslim … In the early 2000s he actually took a break from comedy … to focus on his religion, and he talked about it openly and folks still didn’t want to talk about that. They wanted to talk about whether or not he was doing drugs, was it because he was going crazy, these kinds of things, associations that they would rather make that come out of anti-black racism than actually taking this man at his word. So the ways that religion is summoned into these conversations is really interesting.