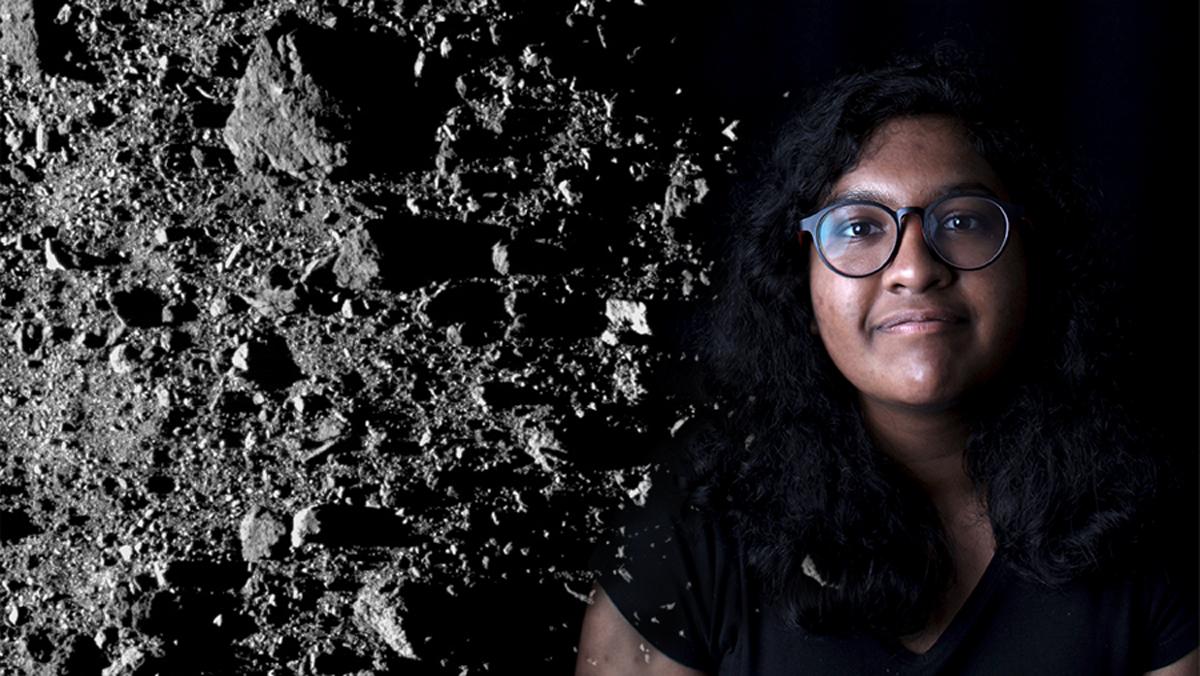 Courtesy of NASA and Antara Sen, photo illustration by Ash Bailot/The Ithacan
Sophomore Antara Sen researched asteroid 101955 Bennu with NASA throughout the spring and summer. Pictured is a region of Bennu close to its north pole, showing the day and night sides of the asteroid.
By Deena Houissa — Contributing Writer
Published: September 21, 2020

Sophomore Antara Sen, a physics major at Ithaca College, conducted research with NASA over the last nine months, findings that will be published in a paper they are co-authoring.

The paper is tentatively called “Spectral Effects of Varying Texture and Composition in Two-Component Mudpie Simulations: Insights for Asteroid (101955) Bennu.” The research is part of OSIRIS-REx, a mission that involves sending an aircraft to an asteroid named Bennu to collect a sample of the asteroid’s surface and analyze it. The OSIRIS-REx aircraft first launched Sept. 8, 2016, from the Cape Canaveral Air Force Station in Florida and reached Bennu in 2018. The researchers are planning for the aircraft to return with the samples in 2023.

Beth Ellen Clark Joseph, professor and chair of the Department of Physics and Astronomy, has worked on the mission since 2009 and has collaborated with students in the past.

Contributing writer Deena Houissa spoke with Sen about their experience working with NASA.

Deena Houissa: What was the research you did with NASA? Also, could you explain what the NASA OSIRIS-REx mission is?

Antara Sen: OSIRIS-REx is a sample return mission. So basically, the OSIRIS-REx spacecraft is currently in orbit around a near–Earth asteroid called Bennu. And basically, it’s going to touch down on the asteroid this year. It’s going to collect samples, and it’s going to come back to Earth with the samples in 2023. So obviously, it’s a big mission, and there’s a lot of people part of it. My research adviser, Beth Ellen Clark Joseph in the physics department, she’s the asteroid scientist for the mission. … I started doing research this January, and my project was basically trying to create simulations, physical simulations off the new surface using minerals here on Earth. So we had colleagues at the University of Winnipeg who created lab analogs for it. … I was basically analyzing those lab analogs and kind of trying to study the properties of those as compared to the properties of the asteroid.

DH: How did you get involved with NASA?

AS: It was through Beth, actually. Our physics department is super close. Literally, I just emailed Beth one day. I heard [about] her research, and I’d really like to get involved with it.

DH: What do you think was the most interesting part of your research?

AS: The most interesting part of my research was getting the results. Oh my goodness, if I were to show you some of the plots, like the graphs that we made, comparing one of our mudpie simulations to Bennu, oh my goodness, it’s crazy. But what was the most exciting part was working with our colleagues. That introduced me to colleagues from NASA. I mean, I was in Zoom calls with these people who have dedicated their life to planetary science. … All of these people were willing to talk to me, a college freshman, about a paper I was publishing. It was insane. But I mean, that is the power of Beth Ellen Clark Joseph. She is just so highly respected within that field. But people don’t dare question her judgment. I mean, she’s a force of nature.

DH: How has your experience been impacted by COVID-19?

AS: Since I do astronomy research, a lot of my work is just coding online. So honestly, not that much. The samples, like the physical samples, were made by our colleagues at the University of Winnipeg. So we already had all the data ready to go. It wasn’t really impacted by COVID that much except over the summer. Beth and I were hoping we could visit Winnipeg, but, well, because of COVID [we could not]. We still met twice a week over the summer when I worked with her and met twice a week during the semester. I’m still meeting with her once every week. The more I worked with her, the more independent I’ve become because of her guidance. So it’s been fine.

DH: How did your experiences at Ithaca College impact your research?

AS: Coming to IC was the best decision I ever made. The physics and astronomy department, I could never in any amount of words describe my gratitude for them and to them. They have profoundly changed my life. The level of support and love in that department astounds me every single day. … They’re wonderful people who you can tell are there for their students. … These people are my family. … Because of the culture of that department, I just knew that if I was to ever make a mistake in research, I’d still have support. … So that made me a lot more confident as a researcher to take risks a little bit and to speak my mind and to not be hesitant because of my lack of previous experience but to grow and learn and sometimes make mistakes if that’s what has to be done.