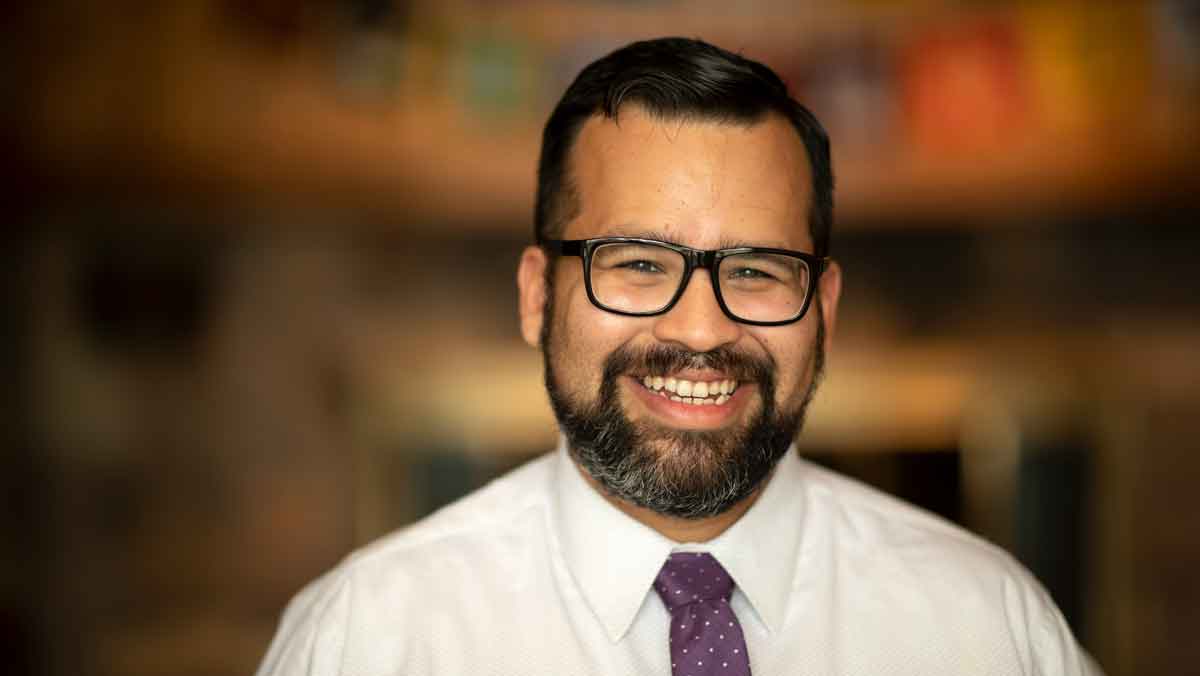 Caroline Brophy/The Ithacan
Hierald Edgardo Osorto has been hired as the first director of religious and spiritual life at the college. He will be overseeing all activities of Muller Chapel.
By Ashley Stalnecker — Staff Writer
Published: September 19, 2018

In a response to a proposal from Roger Richardson, associate vice president of the Division of Student Affairs and Campus Life, and student religious leaders on campus, Ithaca College President Shirley M. Collado created a new position to oversee all the religious programs within Muller Chapel. Hierald Edgardo Osorto has been hired as the first director of religious and spiritual life at the college.

Staff writer Ashley Stalnecker spoke with Osorto about what his position entails, what his goals are and how he plans to address issues that have risen among religious communities at the college.

Ashley Stalnecker: What previous positions have you held, and how will they help you in your new role?

Hierald Osorto: There’s so many experiences. So one of the reasons I find myself here — and I think it aligns with how we as an Office of Religious and Spiritual Life want to move forward — is this commitment to dialogue, collaboration and action as a premise in terms of the work that we do. So, the work that I did in El Salvador was around organizing Campesinos, low-income indigenous farm workers, around access to resources that could help them, in terms of their needs in their particular community. So, at a local level, I got to play a role in meeting and hearing and learning from different communities and their needs within the context of El Salvador. At a national level, my role is to link some of those local conversations with national–level conversations in the country that were happening particularly around climate change and environmental justice issues. At a global level, I was able to collaborate with different UN NGOs [United Nations non-governmental organization}and sit at the table to talk about the needs of our particular communities but also the communities across Latin America in regards to environmental sustainability. … I feel like I’ve spoken a lot but, gosh, I’ve loved everything I’ve done up to this point, so I can get really excited about all of these experiences that I’ve been able to have over my time.

AS: What exactly does your role entail?

HO: Our office, the office of religious and spiritual life, exists to provide opportunities for the IC community to have spaces around how do you make meaning, how do you find belonging and, within that, how do we develop processes for interfaith dialogue that leads into collaborative work around different traditions of faith but also those that are outside faith communities into action of some sort. And so, our office is going to be working across campus and listening really intently and reflecting as we gather people from all places around how do these things connect with what you’re doing in your day to day, and what are your hopes for the work that we’re going to be doing moving forward.

AS: What are your goals for this role?

HO: One is visibility. I want this role to really be a role that is seen as an accessible role that everyone has access to on campus. And, that creates visibility for Muller Chapel as a space, as a home to the campus community and being able to reflect with one another and gather and ask tough questions but also be able to feel supported for wherever they may be in their journey. … So I mean I’m thinking about big picture programming possibilities, but also thinking how do we have these ongoing one-on-one conversations with students, staff and faculty to hear their story, to hear how they’re making meaning in the world and how they are finding a place of belonging here at Ithaca College, or not. I think that this role is an opportunity for that.

AS: How will your role help the community with previous issues on campus including the exclusion within the Protestant Community and the lack of funding for nonchapel affiliated communities like the Muslim and the Pagan communities?

HO: I think that the first thing is that I hope that our office is able to do is create opportunities for people to share their stories and to be able to reflect on what are the ways that we have excluded, but also what are the opportunities that students have found to find a sense of belonging on our campus. I think having that work done is going to be critical in how we move forward. I can’t speak to specifics of what’s happened before my arrival, and I think in many ways that’s a really good thing because I have sort of this likeability to just ask lots of questions. So, I think that that’s part of it. We’re also going to be assessing our current structure around budgeting and processes that we have in place. … Just today, I met with one of the students from the Muslim and ally organization … talking about ways that we can collaborate and talking about resources and funding, and I’m actually going to be their advisor since they don’t have someone right now. And I can do that in my role, to be able to support other groups on campus. And, last week I got to meet, for the first time, the Pagan community, and I went to their meeting that they have here in the Phillips room from 4:30 to 5:30. We have a lot going on in this space, and that’s part of what I want to do is to be able to share the story of the chapel as a home where we have been able to offer different opportunities outside of the three religious communities that we host currently in the chapel. There’s a lot. There’s a big story to tell, and I think having an office of religious and spiritual life gives us that opportunity.

AS: Any other thoughts on your position?

HO: Gosh, so many. Don’t be surprised if I just talk to you, and if you don’t know who I am, I will likely go and say hello and don’t be afraid of saying hello to me. … We live in a world that is so inundated by technology. I hope that in the work that we do is learn how to balance the technology that we need with the face-to-face interactions that we have available to us. I will be talking to you. If I don’t know you, I will say hello, and I will probably invite you to coffee or a meal or a dinner. And if you don’t hear from me, come to Muller Chapel, find me, set up a time to meet because I want to hear what the communities needs are broadly speaking, truly. That aligns with the mission of Ithaca College, right? We are a place that is committed to inclusion and equity, and I want to know where are those places where we haven’t been that, alongside with the places where we are, too. This is a role that holds a lot, and a lot of different people have different experiences, and so I want to hear what those are. And be on the lookout for an open house because we will be having an open house probably in the next couple of weeks as I get settled into the space a little bit more. And walking tours. One of the ideas that I’ve had and I’ve started to do this is I’ve started to do walk-throughs of the space with folks who haven’t traditionally been in the chapel and have them tell me what they see just so I get a sense of how the community sees this space what’s useful, what’s not, what prevents them from kind of walking into this room.

HO: Part of it – I think it’s important to know that we are creating something. We are thinking intentionally about something in regards to religion and spirituality on this campus, and that is an incredible opportunity, I think, that we have for Ithaca College. And so, it takes some courage, and it takes some brave individuals to say, “Okay, let’s do this. Let’s get our hands dirty and work through this together.”

Correction: The new director of religious and spiritual life came about as a result of a proposal created by Roger Richardson, associate vice president for the Division of Student Affairs and Campus Life, and members of religious communities — ranging from the Protestant community to the Muslim community — on campus. The proposal was given to Rosanna Ferro, vice president of the Office of Student Affairs and Campus Life, upon her arrival at the college which, was then submitted to President Collado.