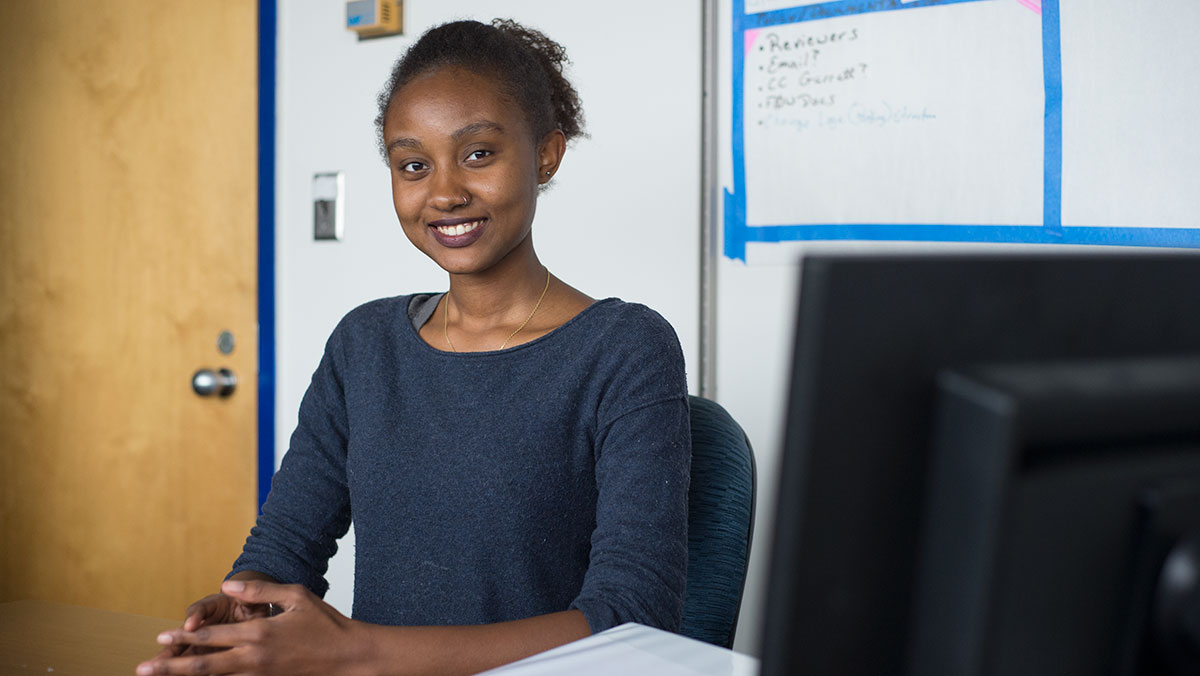 Fernando Ferraz/The Ithacan
IC Office was elected by the student body to be the executive board of the college’s Student Government Association for 2016–17 on April 29, in an uncontested race. Sophomore Marieme Foote led the ticket as student body president.
By Justin Henry — Staff Writer
Published: May 1, 2016

IC Office was elected by the student body to be the executive board of the college’s Student Government Association for 2016–17 after an uncontested campaign period from April 11 to April 29.

Sophomore Marieme Foote led the ticket as student body president. Staff Writer Justin Henry spoke with Foote to discuss challenges facing the campus community and how she plans to “reimagine SGA” to address them.

Justin Henry: What are some of the most important lessons you’ve cultivated from your role as senator and then as your role as Senate chair that contribute to your role as president?

Marieme Foote: I think I learned more about people and about the different voices on campus, and my role as Senate chair and as senator was more facilitative. … I found a way to channel those voices within SGA. … I feel like I’ve realized what it means to be a community and to be a collective and to have a deep understanding of what that would look like, and I hope that is something I can continue working on for our community.

JH: Were there any issues you feel like you had an instrumental role in streamlining into SGA?

MF: Something we worked on a lot this year were the protests and the no confidence vote. Also, like being an active member of the ALANA community and the POC at IC working group and helping bridge that to SGA was something that I really worked on. It’s difficult because … it gets complicated really, really quickly, but working on constituents’ voices heard in SGA and working with students to understand what’s going on. It’s …  important that we as senators and representatives really work to bridge those gaps.

JH: In your view, what are some of the most significant issues facing the student body?

MF: I think it’s coming together as a community, really. In like students, faculty and staff, there’s a lot of things currently dividing us and a lot of communication that’s not happening. Students aren’t connected across campus, and it’s not just with SGA. There just is no connection between students. … People aren’t willing to have dialogue, and when they do engage in dialogue, it’s offensive. It’s not productive dialogue at all. I think that’s our biggest issue as a community.

JH: How would you, as student body president, address that issue of divisiveness?

MH: I think our role as facilitator is to provide resources for students to get connected. … So working on bringing student leaders on campus … making mandatory events where you have to bring at least two representatives from an org if you receive funding, and basically, you will learn more about SGA funding, and you can network with other orgs while you’re there. That’s a way of bringing students who are doing amazing things on campus kind of more interconnected.

JH: Shifting to this semester’s Senate, there’s been a lull in Senate engagement, so moving into the next semester, how would you bring the Senate and the executive board together?

MF: It seems like there was a lot of drop–off from the e-boards that ran last year, so we didn’t have a lot of upperclassmen join SGA again. We had an entirely new Senate, and when that happens, you don’t have mentorships in the Senate. … We have a lot of the senators that are coming back next year. I’m very confident those senators have the skill sets to mentor those senators that are coming in, and we’ll have an increased engagement because people will actually know what they’re doing.

JH: What is the current climate of SGA, and what would it mean to reimagine it?

MF: There’s engagement within, but there’s not a lot of engagement with the campus community as a whole. There isn’t a lot of outreach or a lot of orgs or people that you usually wouldn’t see in the room coming in the room. Even though all meetings are open, you don’t see students that aren’t senators in the room, and so really working on all of that is really important to us.

JH: What would a “restructuring” of the campus community look like?

MF: That all comes into us out-reaching and building horizontally. So like focusing on how SGA functions as an organization and whose voices we’re channeling and also working on horizontal structuring and shared governance.

JH: How would you implement a horizontal structure?

JH: What is the current climate of diversity and inclusion on campus, and what are some of the things you would do to address concerns of the student body?

MF: “Diversity” and “inclusion” are buzzwords. People use the word “diversity” just to mean bodies of people of color, people from different constituencies and disenfranchised groups. … What we’re really focused on is institutional structural change and really fostering an environment where students can grow and where students have access to resources in order to grow. We have — not a broken community — but it’s difficult for a lot of students on campus. We’re not looking at having fake celebrations that say “diversity on campus is great.” … That’s not what we’re looking at. We’re looking for, what are those students experiencing on campus, and what can SGA do to work with them on their experience here. We’re really trying to stray away from those buzzwords.