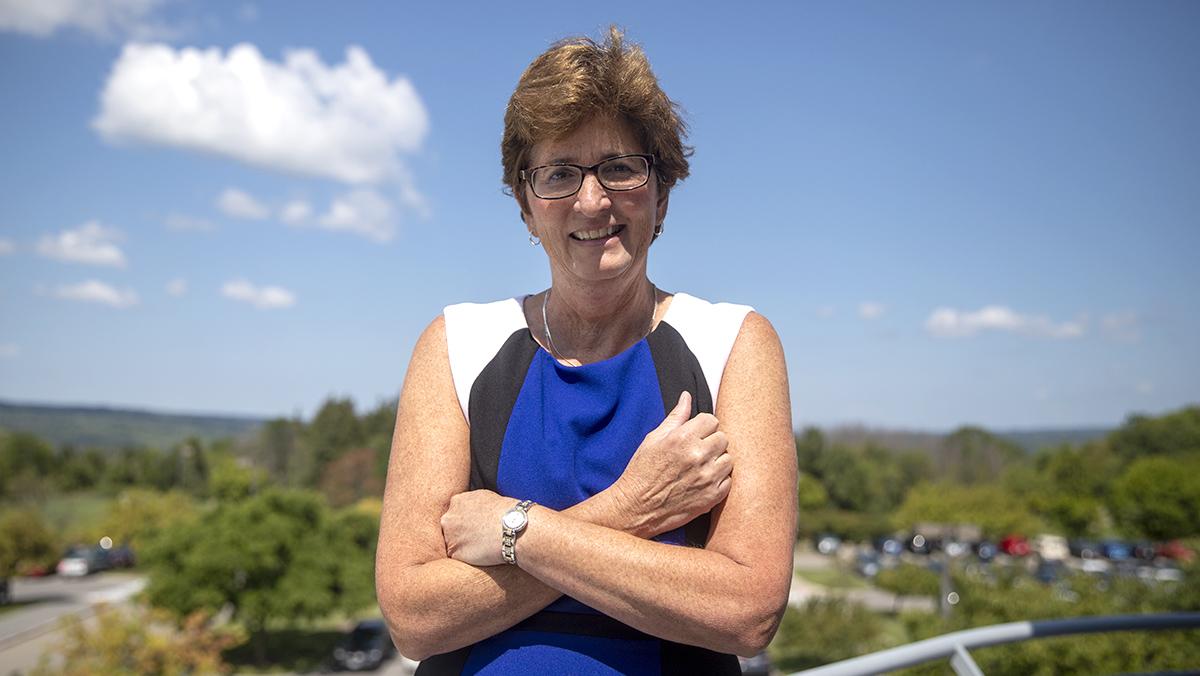 On June 9, Amy Falkner was appointed as the new dean of Ithaca College’s Roy H. Park School of Communications and began her position Aug. 1.

Prior to working at the college, Falkner worked as a faculty member at the S.I. Newhouse School of Public Communications at Syracuse University in Syracuse, New York, since 1998. She has served as acting and interim dean for two years from 2018–2020. She was named associate dean for academic affairs in 2006 and served as senior associate dean from 2012 to 2022.

Falkner succeeded Jack Powers, professor in the Department of Media Arts, Sciences, and Studies, who had been serving as interim dean of the Park School since 2020.

News Editor Syd Pierre sat down with Falkner to discuss her transition to Ithaca College and her goals for her new role.

Syd Pierre: What drew you to Ithaca College?

Amy Falkner: … The Park’s school size and different configurations of student populations made it really interesting for me. I’m a person who likes to logistically be a problem solver. And it’s not saying that that’s why I’m here, but when there’s challenges, there’s always opportunities, right? And so an opportunity presents itself to be a dean of a school as well known, and, frankly, having so many talented faculty and staff and ambitious students as a place you would like to lead. … So to be at a place where people at this college are very invested in the success of this college … was intriguing to me. I could see that passion when I thought about applying and also during the interview process. So, to me, it was a very attractive place to come to work.

SP: While you were at Newhouse, you were involved in their diversity, equity, inclusion and accessibility strategic plan. Is that type of work something you’d like to continue at Ithaca College?

AF: Yes, actually, that work has already started in pretty much every conversation, whatever meeting I’m in — and there’s been a lot — but where I see opportunities to bring it up or people have brought it to me because they know that I’ve done a lot of work in this space. That is such an important piece of what a college experience should be in here. … So, to me, everything we do should touch on this. And so there’ll be practical ways to do that. There’ll be institutional ways to do that. But it also takes a bit of a culture change. Right? Some people are already diversity advocates and understand the importance of it. Some people are afraid to talk about it. So there’s a spectrum. And so how do we get people to be in a place where they’re comfortable having those conversations and have enough information, real information, about the importance of it?

SP: You talked a little bit about your newspaper industry background. Are there any specific skills or lessons that you have taken from that, that you’ve been able to use now in higher education and academia?

AF: As a person who interacted with media planners, that was also professionally what I did, but how it’s helped me as I went from a department chair to an associate dean to a senior associate dean, is there’s not a lot of people … who understand both editorial and advertising. It’s given me a really great perspective. … So just having the management ability of diverse groups, even within an industry, was helpful. And I think as a person who works across the pros and cons of each different media type, of course it helps you as a dean. Because then you actually know what it is, because you’ve done it in a professional life. So I have not been a person who has been a screenwriter or made a film, but I have sold those things. And so I don’t know the minutiae of what happens in there, but I know enough.

SP: The media industry is constantly changing and evolving. What sort of skills do you think are beneficial for students in the Park School to have when they leave the college?

AF: …To me, the ability to tell stories for all the majors that we have here, no matter what platform it’s going to be on. But obviously, the world is digital. We have to teach that side as well because it’s just the reality of the world that we live in. … So just understanding that the way the world and specifically the world that students are going to work in, is how do people consume media. And how can I tell my story in a way that they’re actually going to pay attention? Because there’s the pay attention part that is the challenge. So the right time, right place, right message is all still true. It’s just harder now. The world is changing, well the world is changing, because we keep changing, because of the technology that we consume and the way we do that. And so our goal as a school, obviously, is to stay on top of that. And, in fact, if we can be in front of it and do some experimental classes, or whether it’s partnering with industry and things to figure out where this goes next, then we’re able to help you, which is the goal.