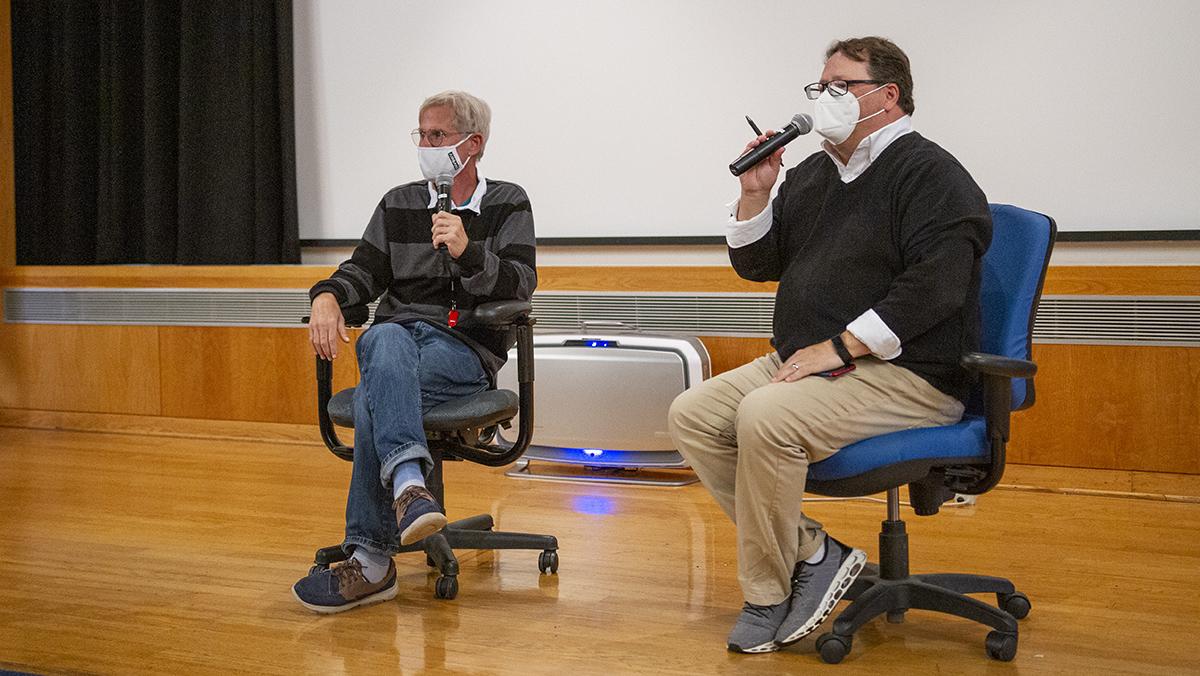 He has been working in the television world for the past 36 years and is most known for writing on sit-coms including “Cheers,” “Frasier,” and most recently, “Modern Family.” O’Shannon worked with interim dean Jack Powers to teach a course to writing for film, television, and emerging media students on comedic narrative writing during his two-week stay. He was able to share his knowledge and experience with students and give them the creative tools to sustain long–form comedic narratives.

Staff Writer Cecilia Meza spoke with O’Shannon about his motivation and experiences working in the television industry.

Cecilia Meza: Why did you want to start writing for television?

Dan O’Shannon: It started as a kid. I wanted to be funny, I wanted to make people laugh … I made a lot of jokes, funny faces and fell down a lot and whatever I could to make people laugh, and then I began to understand how to make jokes. Then I did stand–up for a while, but I really gravitated towards writing material for myself and other comics. Then eventually I made my way to Los Angeles and learned how you write for television and I struggled for a while, but then I got work.

CM: What is your favorite part of writing for television?

DO:  I like making people laugh, I like making people feel things and I like the power it gives you … When you write TV shows it’s not just the laughs, it’s making people cry, making them hope, making them angry, making them anxious about things that don’t even exist. You realize there’s a tremendous power in it and through that, you can say things that make people realize that we all do have things in common, that everything isn’t just about hating another political party or anything like that, and once you know how to do it you have the responsibility to do it in a way that is productive and helpful to society and not hurtful.

CM: Have you ever thought about giving up?

DO: Definitely, there are times when it feels disheartening to do it again. You watch the news and you see how much people embrace ignorance now and you think, ‘Well why am I working so hard to reach these people, they will only believe what they want to believe?’ And then you just do it anyway.

DO: When I was young one of the big things that drove me was that I just wanted to prove that I could because I think everyone in my life when I was a kid said “you don’t have the talent, you can’t do this sort of thing with your life.” And so a lot of my drive was, I’ll show them, and then one day I realized I’d shown them so I had to find a new reason to do it. And what it is for me is that when I was a little kid my home was a rough place to grow up and I escaped into television … it felt like this invisible voice was saying we’re not all like your parents or teachers, we’re out here come and find us, and I did eventually find them. Now when I write things I assume that whatever I write will be seen by a few million people and that most of them will forget it pretty quickly, but there will be a couple of people out there and it’ll speak to them and say “you’re not alone, there’s people like you, come and find us,” and I think that’s the nicest thing I can do.

CM: Do you have any advice for people interested in the entertainment industry?

DO: You should be gearing yourself towards creating content. If you are a writer, but you don’t feel like producing or directing you find those students who produce and direct, but don’t feel like writing and you start working with other people. Make stuff, make stuff, make stuff. Make all your bad movies now, make all your bad videos now and get better, and get better. Create a body of work, create a style, learn what you’re doing so that when you land in Los Angeles you have a resume, you have an education, and you have a ton of things you can show.