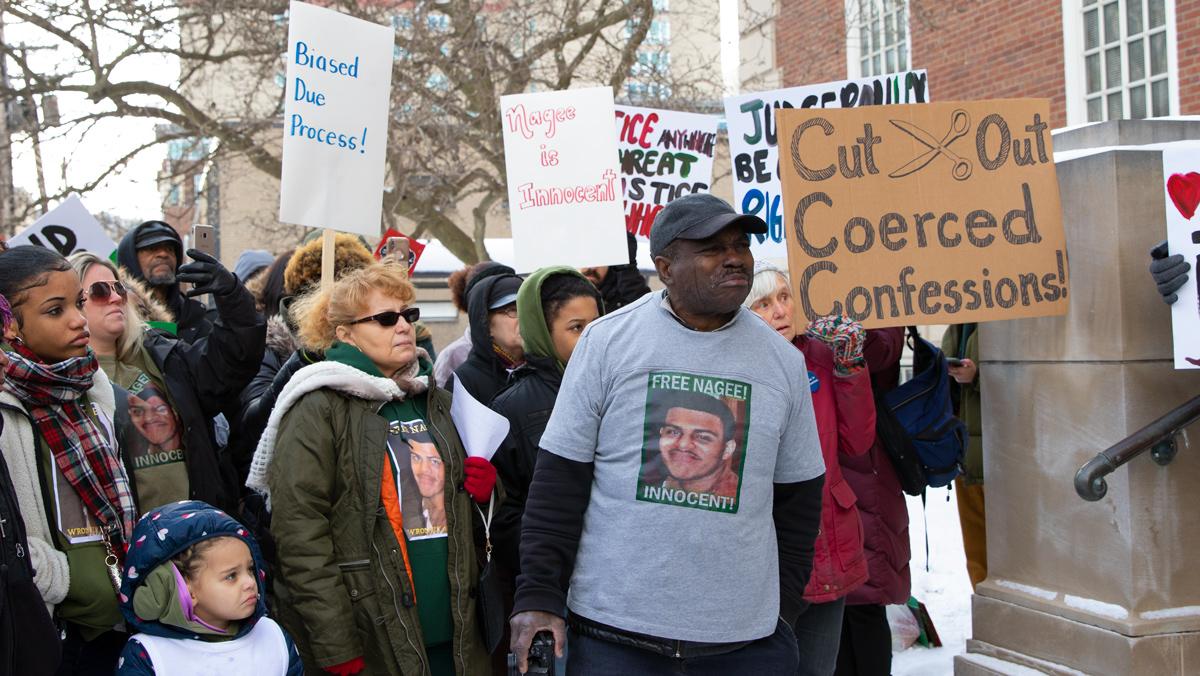 A crowd rallied outside the Tompkins County Courthouse on Jan. 20, calling on the court to vacate the judgment against Nagee Green, who was convicted of murdering Ithaca College student Anthony Nazaire in August 2016.

Green was charged for allegedly murdering Nazaire and stabbing Ithaca College student Rahiem Williams after a large fight broke out at approximately 2 a.m. Aug. 28, 2016, outside Cornell University’s Willard Straight Hall. The 26-year-old from Freeville, New York, was convicted of murder at a retrial in September 2017 after the previous jury was deadlocked.

The rally was organized by The Free Nagee Green Committee, which consists of a few faculty members at Ithaca College, including Paula Ioanide, associate professor in the Center for the Study of Culture, Race and Ethnicity, who was present at the rally. The committee believes that the defense team deliberately withheld relevant evidence, the police coerced Green’s confession and the jury was biased. The group has uploaded documents explaining why it believes he is innocent on its website.

Ioanide said she recognizes that it is hard for the college community to grapple with this case but believes that there is strong evidence Green did not commit the crime.

“There are so many details that stick out like a sore thumb,” Ioanide said. “It’s hard because we lost one of our own.”

Green’s grandfather, grandmother, father, mother and aunt spoke on behalf of Green’s character and the experiences they have had with the Ithaca Police Department and the Ithaca Court system.

“It doesn’t benefit the community to have such a false sense of confidence with the decision–making,” his grandfather said, followed by ‘amens’ from the crowd. “I know my grandson. That’s not him.”

Maureen Lane, Green’s aunt, told the crowd about how the experience has been grueling for the family.

“When I first heard about my nephew’s situation, the first thing I thought were my worst fears came to life,” Lane said. “They finally got him, and what I meant was the police find a way to make my nephew a statistic.”

Green is a single father, and his young daughter, who was present at the rally, is currently under Green’s mother’s custody.

Lane said Green’s defense team took Green’s file from him, but, once the family got a hold of it, it discovered that there was evidence excluded from the trial. The attorney told the family it was not credible. This motion is available on freenagee.org.

Green’s case is representative of how black and brown people are disproportionately affected by crime, Fabina Colon, director of the Multicultural Resource Center in Ithaca, said.

“We are standing united to demand justice because we are no longer going to leave it your injustice system,” she said. “We don’t want to keep calling it a justice system when it does not produce any type of justice.”

Phoebe Brown, a local activist, said it is difficult to keep coming out to protest the wrongful conviction of black and brown people.

“Nagee has been given a sentence only black and brown people see in the United States of America,” she said. “This hurts. I feel like I am just at a loss for words. It’s hard for me to have to keep coming on these steps for our young black and brown brothers. It’s just unfair. It’s just not right. And if he didn’t have a family that was as confident as they were, how many younger brothers and sisters we lose every day in the system who have families that don’t feel empowered?”

Chris Barnes ’19 said he attended the rally because the evidence of Green’s innocence is compelling.

“It is the best way to take the next step,” he said. “I hope whoever killed [Nazaire] is brought to justice, but it’s not Nagee.”