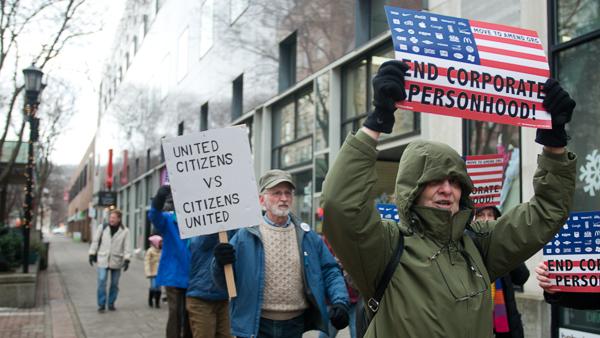 Rachel Woolf/The Ithacan
Kathy Nelson, of Ithaca, marches with Move to Amend members Sunday on The Commons while heading to a rally at Autumn Leaves Bookstore.
By TinaMarie Craven — News Editor
Published: January 24, 2013

This was the rallying cry Sunday of 15 members of Move to Amend, a group dedicated to ending corporate involvement in politics, who marched to Autumn Leaves Bookstore on The Commons to call attention to a ruling that gives corporations First Amendment rights.

Move to Amend is dedicated to social and economic justice and works to ensure that democracy serves the interests of the people instead of corporations.

The Move to Amend rally officially began at the top floor of Autumn Leaves, where more than 30 people assembled to discuss the public’s involvement in politics.

Though elections concluded in November, the group chose to rally at the end of January to recognize the third anniversary of the Citizens United case.

The gathering was kicked off with Move to Amend member Will Fudeman’s performance of a song titled “We The People.” The lyrics were a combination of phrases borrowed from the preamble of the Constitution and a call to amend the First Amendment to exclude corporations.

Fudeman’s lyrics included phrases like “We the people, the living breathing people, not some legal fiction” and “Congress should make no laws abridging the freedom of speech.”

“It looks like bribery, but [legally] it’s not bribery,” Manfredo said. “Bribery is not something we want to include in our system.”

Manfredo said corporate donations are not bribes and are made legal because it is seen as an expression of free speech. She argued the extension of free speech to corporations is unfair because they can have their interests better represented during a campaign because corporations have more money to donate to campaigns than the average person.

“Money is power. The more money you have, the more power you have,” Manfredo said.

Victor Tiffany, coordinator of the rally, said the public should call upon their representatives to have the Citizens United ruling overturned.

“In practical terms, corporations, because of First Amendment rights, have such a huge advantage in propaganda in television over citizens,” Tiffany said. “They’re dominating the dialogues on social issues and political issues and economic issues.”

J.R. Clairborne, representative of the 2nd Ward for the City of Ithaca’s Common Council, spoke after Manfredo and discussed how voting is important because it has the potential to bring about change.

“Voting is not a spectator sport, you cannot sit on the sidelines and think others will take care of it,” Clairborne said. “It affects the air you breathe, the food you eat and the education you or your child receive at school.”

The final speaker at the rally was Dan Lamb, the 2012 Democratic candidate for New York’s 22nd Congressional District. Lamb addressed the inequality that is created by the corporate involvement in politics. He said he is optimistic that, though it will take time to change the corporate personhood legislation, he said it will happen if citizens urge their representatives to push for an amendment to put the rights of people before those of corporations.

“I’ll tell you one thing, representatives do not like things to be made public that reflect poorly on them,” Lamb said.

The people in attendance were enthusiastic during the question-and-answer portion of the rally, when they discussed their animosity toward of corporate involvement in campaigns.

Wayles Browne, a rally attendee, said he thought the speakers were enjoyable, but he was disappointed that the weather prevented the rally from remaining outside.

“If it hadn’t been so cold and windy, it would have been a real rally with people holding up signs, but as it turned out, it turned into a meeting,” Browne said.

Tiffany said the rally, which he spent two months coordinating, was an overall success. He said he was pleased with the turnout and the political dialogue between the speakers and the audience.

“The playing field in this country is tilted toward the corporation, and what we’re trying to do is level that playing field by giving them privileges not rights,” Tiffany said.