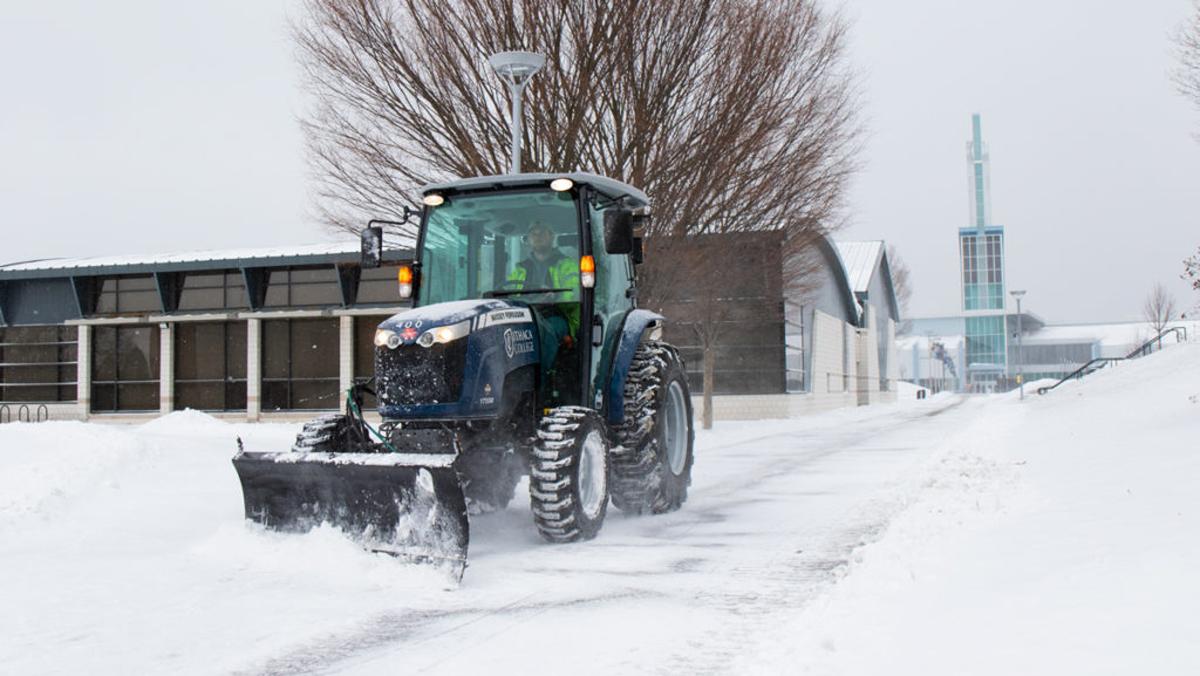 Ash Bailot/The Ithacan
On Feb. 3, a snowstorm brought over 10 inches of snow to Tompkins County, forcing many schools to briefly shut down. On Feb. 3 and Feb. 4, Ithaca College chose to hold remote instruction and students did not receive a typical snow day.
By Joshua Pantano — Contributing Writer
Published: February 23, 2022

On Feb. 3, a snowstorm brought over 10 inches of snow to Tompkins County, forcing many schools to briefly shut down. On Feb. 3 and Feb. 4, Ithaca College chose to hold remote instruction and students did not receive a typical snow day.

With the COVID-19 pandemic, instruction over Zoom has become a common alternative to in-person instruction. But students have shared their concerns over this. When the college previously canceled classes during snow days, classes were canceled. Now, they just go remote.

While some students and professors could operate normally online, the sudden transition proved to be difficult for many. Freshman Ryan Harmon, a TV-radio major said the remote day presented challenges with hands-on engagement.

Communications students were not most adversely affected by the remote instruction. Students of the School of Music had difficulties with remote instruction. Junior Bea Tria, a voice major, said having remote classes lowers the quality of her education.

“No one likes being in a choir online,” Tria said. “Singing into a mic doesn’t sound like singing into a full space, like a choir hall or something, and that’s what choir is all about.”

Although Tria is primarily a vocalist, many of her classes still require physical instruments, like percussion kits and keyboards, most of which are located in her locker in the music school. This is the case for many music students, especially those with instruments like double basses, which are usually six feet tall.

On Feb. 2 at 10:21 p.m., Ithaca College announced that classes would be remote on Feb. 3 and 4, and students or faculty members who lived far away from the James J. Whalen Center for Music were unable to pick up their equipment as a result of the severe weather conditions. Tria said she decided not to walk to Whalen to get her instruments due to the hazardous weather.

“I had percussion class on Friday, and I didn’t want to go to Whalen to get my percussion stuff,” Tria said. “But I think that vocalists are kind of lucky because we don’t have a double bass to lug around, you know. Most people keep their stuff in their lockers in the music school.”

“I teach a singing class,” Posegate said. “So much of the class is, ‘All right, everybody, let’s sing this together,’ and there’s no way to do that on Zoom. I’m trusting that they’re singing along with me. If something goes wrong in class, I can listen to 20 people singing and I can be like, ‘Oh, okay. Someone is singing this note wrong. Let’s just practice this together.’ But on Zoom, that’s really hard.”

With primarily vocal classes, Tria was able to get by in her room, but other students did not have that luxury. Freshman Mackenzie Ward, a clarinet performance major, found herself in the practice music rooms on the bottom floor of Whalen for both of the snow days. She needed access to a piano and her clarinet, both of which were in Whalen.

“My entire day pretty much consisted of me being in the practice room because I have classes where I have to sing and play keyboard,” Ward said. “When I went to the practice rooms, there were definitely a lot of other students in there doing classes because it’s just easier — if you have to sing or perform — to be in a practice room rather than your own room.”

Ward said the snow days were the perfect opportunity to give students a well-deserved break.

“Personally, I’ve always liked snow days, but the fact that we were on Zoom still was a little disappointing because I just wanted the day off,” Ward said. “Just go back to the usual snow day and let us have a break.”

Posegate said there is a downside to canceling classes during snow days.

“It certainly seems like it would be an attractive thing to do, but it can make things really hard on a professor in terms of things to get through,” Posegate said. “As a teacher, if I lose a day of class, I have to scramble to get it some other way.”

Not all employees had the opportunity to work remotely during the snow days either. Kimberly Lieb, the HR Business Partner for Student Affairs and Campus Life, explained the college’s policy with an Intercom post.

“‘Essential’ personnel are expected to report to campus or remain at work on campus for their regularly scheduled hours, and possibly beyond, until the emergency is over,” the post stated.

Essential employees include those of the Office of Public Safety, the Health Center, as well as similar services, but not professors.

“Snow days are things you look forward to,” Tria said. “When they happen, you’re happy, but that’s not a thing anymore. And if anything, now when a snow day happens, you’re just dreading going to class. So I don’t think there should be remote instruction on snow days.”