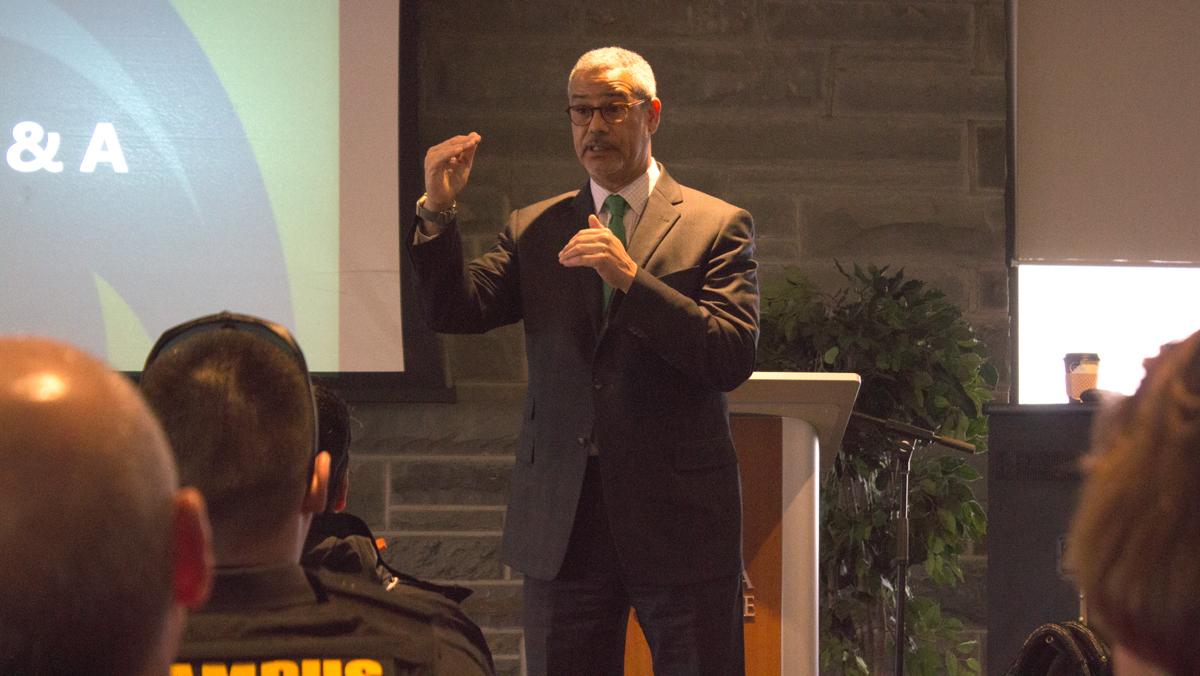 An external assessment of the Ithaca College Office of Public Safety and Emergency Management conducted in November 2016 found that the office’s credibility and legitimacy are “deeply tarnished” among campus community members, specifically students. The assessment made more than 40 recommendations for Public Safety, some of which the college has already addressed.

The assessment outlined six priority areas, in which it made 47 recommendations for the office. In order of urgency, the priority areas include a comprehensive program for producing unbiased policing; selection, staffing and retention; branding the Office of Public Safety and Emergency Management; bias incident response protocols; cultural competency training; and crisis intervention training.

The college released the external assessment of Public Safety on Feb. 22. Margolis Healy, a campus safety and security consulting firm, conducted the assessment for the college. The assessment consisted of 21 group interviews, 138 individual interviews and answers to an anonymous feedback Google forum from students, faculty and staff.

On Sept. 15, 2015, then-Provost Benjamin Rifkin announced that then-President Tom Rochon requested that an external party review of the Office of Public Safety and Emergency Management. The request followed a protest by resident assistants because of what they called racial profiling and harassment by Public Safety officers.

Two campus police officers made comments that RAs called “racially insensitive,” during a training session with RAs. Sergeant Terry O’Pray dismissed the RAs concerns about racial profiling, saying it does not happen at the college. While talking about weapons on campus Master Patrol Officer John Elmore held up a black BB gun and allegedly said, “If I saw someone with this I would shoot them.” One RA related this to the police’s killing of Tamir Rice, a 12-year-old boy who was shot while carrying a black BB gun in November 2014.

A number of students of color came forward during the Fall 2015 semester with their stories accusing campus police officers of racial profiling.

“Anytime we do an assessment or a review, it is a point in time assessment,” Healy said at the session. “We can only look at what we are hearing when we were here.”

Healy said he thought Public Safety had made a number of positive changes since the assessment.

At the information session, Kerry presented on how his office has addressed some of the recommendations, as well as how they have tried to engage with the community.

The most robust area of recommendations comes in the report’s Comprehensive Program for Producing Unbiased Policing section. The executive summary states Public Safety has taken some steps to “address the challenges of bias-based policing,” such as providing cultural competency training for Public Safety staff members and developing drafts of written directives to address bias-based policing. However, the report states that these steps suffer from two “significant pitfalls” — a lack of an overall strategy and a lack of momentum.

In order to manage addressing these changes, the report recommends the college develop a comprehensive strategic plan to address bias-based policing policy.

The report makes 17 recommendations under the comprehensive program for unbiased policing priorities. Some of these recommendations have already been implemented, such as moving forward with a body-worn camera program, which was rolled out in April 2017.

Other recommendations include implementing programs such as Coffee with a Cop. One recommendation is to require officers — when staffing permits — to engage in foot patrol for designated periods of their shifts. Another recommendation is to work with the Office of Human Resources to develop diversity goals. Lastly, the report recommends having Public Safety partner with an academic department at the college or at Cornell University to coordinate and manage the collection and analysis of traffic– and pedestrian–stop data, with a goal to identify racial, ethnic or gender disparities in the data.

Public Safety has attended a series of trainings with Student Accessibility Services about “invisible disabilities” and another with Sean Eversley Bradwell, director of Programs and Outreach, regarding “inclusive excellence,” according to Kerry’s presentation on the office’s campus engagement activities. Kerry said that in April, the office will be starting “eat and greet” events in the campus dining halls.

The report begins this section with “many interviewees described OPS as a revolving door in the area of retention.” Kerry estimated in April 2017 that empty posts constitute roughly 30 to 35 percent of his patrol staff.

The selection process for candidates for Public Safety positions should be a central component of the comprehensive plan mentioned earlier, the report states. It also states that it appears there has been a disconnect between Human Resources and Public Safety, which has led to finger–pointing regarding the inability to meet goals.

There are five recommendations under this priority area, which include having at least one student and representatives from key stakeholder areas as part of the selection and promotional processes. Another recommendation is having Public Safety and Human Resources partner to develop a recruitment strategy to target nontraditional sources of potential candidates “to ensure it is casting the widest possible net to attract a diverse candidate pool.”

At the information session, Kerry noted that the office included faculty, staff and students in the hiring process starting in April 2017. It also began recruitment, screening and hiring of personnel based on “demonstrated intangibles” in March 2017.

Public Safety did not have a branding strategy in November 2016, the report states. This, the report argues, has led to a largely negative narrative about Public Safety and specific officers.

The recommendations from the report include collaborating with the Office of College Relations and Communications to develop a branding campaign and review all Public Safety and other college publications to ensure message consistency.

In March 2017, Public Safety increased its use of social media for crime prevention and community relations.

The report states the college does not have a formal process for responding to bias-related incidents, and some interviewees expressed concerns about officers’ lack of understanding of how to respond to these incidents. This leads to a recommendation to establish a Bias Incident Response Team, similar to those at other institutions around the country. Over 100 institutes of higher education have Bias Response Teams, according to The New Republic.

“I’m really happy to report that I’ve received a draft of this process already this week, and our goal is to pilot this protocol and process this spring and to have it fully implemented next fall,” Ferro said.

Prior to the assessment being published, the college had efforts to bring “best-in-class” cultural competency training to Public Safety through the fair and impartial policing initiative. Yet the effort lost steam and did not come to fruition, the report states. The fair and impartial policing initiative is a training program that, according to its website, trains officers “on the effect of implicit bias and gives them the information and skills they need to reduce and manage their biases.”

In January, Public Safety launched a Fair and Impartial Policing training program for its staff.

The recommendation for this priority area is to consider immediately funding FIP training and sending a minimum of two officers to the Fair and Impartial Policing Training-of-Trainers certification program.

Other recommendations under this section include requiring supervisors to respond to all mental health calls, training dispatchers to attempt to determine calls that potentially have a mental health component and working with the Center for Counseling and Psychological Services to ensure all officers have a basic orientation to effectively respond to individuals who may be in the midst of a mental health crisis.

The findings mention a “perfect storm” that created an oppositional relationship between the campus community and Public Safety. This includes the office’s being unable to adopt many progressive approaches it tried to adopt due to a sense of inertia, the report states. The report goes on to state other contributing factors as to why it was unable to adopt other approaches such as the national dialogue about the police and their relationship with people of color, partly because of high-profile police killings of African-American men.

“In our view, these factors created a perfect storm that erupted shortly after a tense interaction between an Ithaca College police officer and a resident advisor at a training session,” the report states. “This situation, and the resulting public discourse, virtually paralyzed the department and its leadership, halting progress and creating an oppositional relationship.”

“Reading over it, I was skeptical just because I think Bill [Kerry] has ushered in a new era for Public Safety and community policing at IC,” McClinsey said. “When reading the report, I have very much taken it with a grain of salt just because of all the things that have happened. That being said, the recommendations put forward and a lot of the things that are in that report we do need to take seriously.”

McClinsey also said she thinks Public Safety has become more accessible since the protests in the fall of 2015.

“I think that if they were to do another report, starting right now, that reputation would be drastically different than the one they’ve received in November 2016,” McClinsey said.

SGC Off-Campus Senator Charlotte Robertson attended the presentation and said she was concerned with Public Safety’s negative reputation. She also said she believes Public Safety has a way to go to repair their image.

“It’s going to take the Office of Public Safety a while to build up that trust again with a student body that felt hurt by them,” she said. “But I am excited about Bill Kerry becoming the director of Public Safety. I’ve had really great experiences interacting with him.”

Ferro said the college is now looking at the recommendations the report made.

“We received the report,” Ferro said. “We decided as a team to accept the report, and now we’re going to be spending some critical time analyzing all the recommendations. We want to make sure we’re thoughtful. As you can see, a lot of the recommendations have already been in practice, even before the report was actually given to us, and there are some that are going to take a little more time.”

Kerry said Public Safety will continue to listen to the campus community and attempt to build trust.