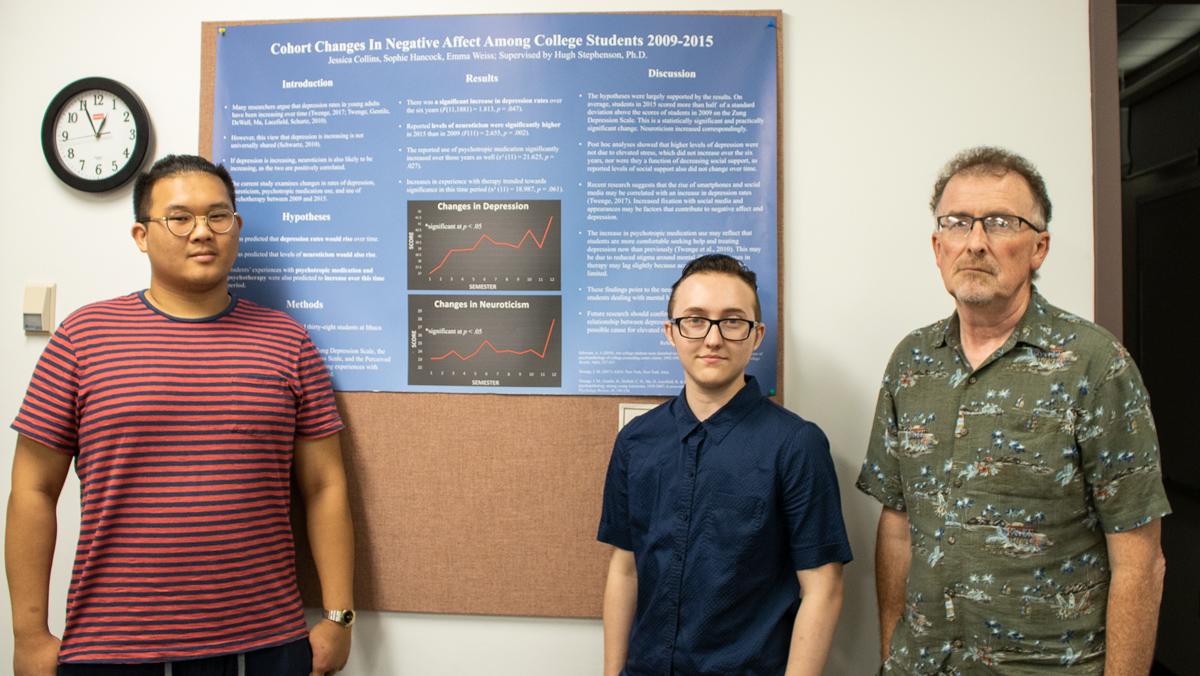 Poor mental health among college students has steadily increased across the nation. A research project by Ithaca College faculty and students demonstrates that the college is no exception.

Hugh Stephenson, associate professor in the Department of Psychology, facilitates teams of psychology majors that conduct research in areas relating to psychological health and well-being among college students. Teams have consisted of anywhere between eight to 13 people per semester. Seniors Michael Yeung and Alex Gray worked on a research team for the past three semesters that studied the changes in student anxiety and depression at the college over the past 10 years.

Stephenson said that through the study, which has been conducted since 2009, the team found that anxiety and depression have increased dramatically at the college in the last decade. He said this increase could be linked to the rise in social media use among students. Stephenson said the team found that depression and anxiety rates among students from the college match the national standards.

The set of research Stephenson’s psychology students worked on from 2009 to 2015 won an award of excellence in April 2018 at the 72nd annual Eastern Colleges Science Conference for outstanding presentation in psychology. Psychology students normally travel to regional and national conferences to present their work, which is one of the last and most important stages of their research, Yeung said.

Stephenson said the research team cannot know exactly what is causing these significant increases based on the research. The team also looked at the impact of social support — talking to friends and family to help boost self-esteem — which is a large factor when studying depression and anxiety, but there were not any significant changes within the last decade. Other factors including stress, alcoholism, drug use and weather were considered as causes of the increases in depression and anxiety, but none of these variables have noticeably changed.

However, Yeung said the team members agree that social media is a major factor because it has an isolating effect on people.

A recent study from the University of Pennsylvania monitored social media use among undergraduate students. The findings suggest that limiting social media use to approximately 30 minutes per day may lead to significant improvement in well-being.

While depression rates have been rising for the past 10 years, they began exponentially increasing starting in 2014. Psychologist Jean Twenge, professor of psychology at San Diego State University, spoke at Ithaca College last September and warned students about the overuse of smartphones. In 2017, Twenge published a book, “iGen,” that tracks cohort changes in student behaviors and emotions. Stephenson said Twenge brought to light that there are dramatic increases in depression and anxiety related to smartphone use. In her study, she established that 2013 was the first year when more high school seniors had smartphones than those who did not.

When looking to the future, Gray said that unless something drastic happens to improve on-campus mental health services, depression and anxiety will likely continue to increase. The college’s Center for Counseling and Psychological Services has received criticism in the past for its lack of counselors and long wait times for appointments, but it has recently implemented new services and more counselors.

Stephenson said there would probably have to be broader changes, like people getting rid of their phones, which he does not believe will happen.

“Increasing awareness might help people stand back and use their social media more critically,” Stephenson said. “They can learn to say, ‘I don’t really need that’ and ‘Yeah, I’ve been on Instagram for five minutes and I don’t feel as good as I did five minutes ago.”

Commentary: Mental health is crucial even during finals week