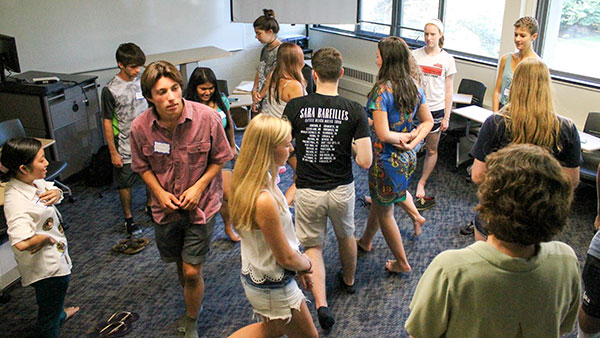 Jillian Flint/The Ithacan
Students in the "Quest for a sustainable future" theme participate in a group activity on Aug. 25 in Friends 302 as part of the ICC Theme Kick-Off Events.
By Sabrina Knight — Staff Writer
Published: September 2, 2014

The Office of Residential life has introduced a new method of motivation to encourage first-year students to attend programming for the Integrative Core Curriculum as part of the First Year Residential Experience.

Under the FYRE Incentive, each time a student attends an ICC theme–based event, hosted by a resident assistant or FYRE associate, he or she will receive a raffle ticket entered into a pool for a monetary prize, Bonnie Prunty, director of residential life and judicial affairs and assistant dean for first-year experiences, said. A student can also receive an additional ticket by writing a reflection for his or her portfolio, an aspect of the new ICC requirements. Prunty said 20 tickets will be drawn at the end of the academic year, and each of those winning students will receive $2,000 toward their housing for the following year.

Funding for the prizes was received from the Office of the Provost, Prunty said, and won’t affect the allocation of budgets throughout other campus departments.

Junior Sean Themea, a second-year RA in the “Identities” theme, said his turnout with programming last year quickly dwindled throughout the year. He said he started off with 70 students coming to programs, and by the end of the year he only had five students.

“At first I think students were there because they thought they had to be,” Themea said. “I think that there was some miscommunication in terms of whether or not it was mandatory or encouraged, and this year we’re focusing on it being encouraged with incentives.”

Themea said he thinks this year will be more successful because there is more communication between RAs and residents about programming. Students will be able to go on OrgSync and see a calendar of all the programs in their housing group and which ones apply to each theme.

Prunty said the ICC programming was intended to help freshmen meet new people within their theme, learn about campus resources, meet faculty members and think about their theme in a deeper way. Last year, about 40 percent of freshmen attended programming, Prunty said. With the incentive this year, she hopes that number will be much higher.

She said ResLife is encouraging more students to attend the programs because surveys from those who attended events last year indicated that the programs proved to be beneficial to those students in understanding their theme.

“This year in addition to those benefits, we were trying to figure out is there something else that we can do that might take that percentage of people who are the skeptics, who are less likely to take the time and actually try sometime, and encourage them to go try a first thing because we believe that once they try something, they’ll keep coming back,” Prunty said.

As a resident in the Honors Residential Learning Community and FYRE, freshman Alex Bredikin said he was unsure exactly what his theme, “World of Systems,” meant, but after the opening ICC Kick-Off events with all members of that theme in a residential cluster on Aug. 25, he understood more about how students in the group are all connected and what the theme is all about.

He also said he likes meeting students in the same theme so he has someone to talk to during programs. Bredikin said he would go to ICC events even without the incentive, but it helps to give him another reason to attend the events.

“If they’re putting work into these programs, you want to go hang out and see what’s going on,” Bredikin said. “Also, I feel like if I don’t go, I’m going to miss something important or that my understanding of a ‘World of Systems,’ or whatever other theme it is, wouldn’t really be as clear.”

As a first-time RA, sophomore Katrina Clark, who lived in the Honors Residential Learning Community her freshman year, said she thinks sophomores don’t understand the ICC.

“They got lost in the transition year. It’s good that we’re implementing things where people will understand it more now, but I still feel like sophomores should still be included,” Clark said.

Last year, Clark said,she understood how to fulfill her ICC requirements, but didn’t understand what her theme “World of Systems,” meant. Clark didn’t go to any ICC programming in the residential halls because she lived in the Honors Residential Learning Community and was not required to attend them.

This year, Prunty said, the Honors Residential Learning Community is also considered FYRE Housing, so unlike last year, freshmen in Honors Housing will have to fulfill the same FYRE requirements as those not in Honors Housing.

The whole purpose of the ICC programming integrated with FYRE is to create a more community-based residential experience that can also relate back to students’ classes, Prunty said. If students choose not to participate, she said, they are not utilizing the full potential of the program.

“Students who participate in programs just in general, theme-based or otherwise, have more overall satisfaction with their residence life experience than students who don’t participate or participate less,” Prunty said. “So it just makes sense that it’s good for everybody if we can get the participation rates up, and that’s what we’re hoping to do.”