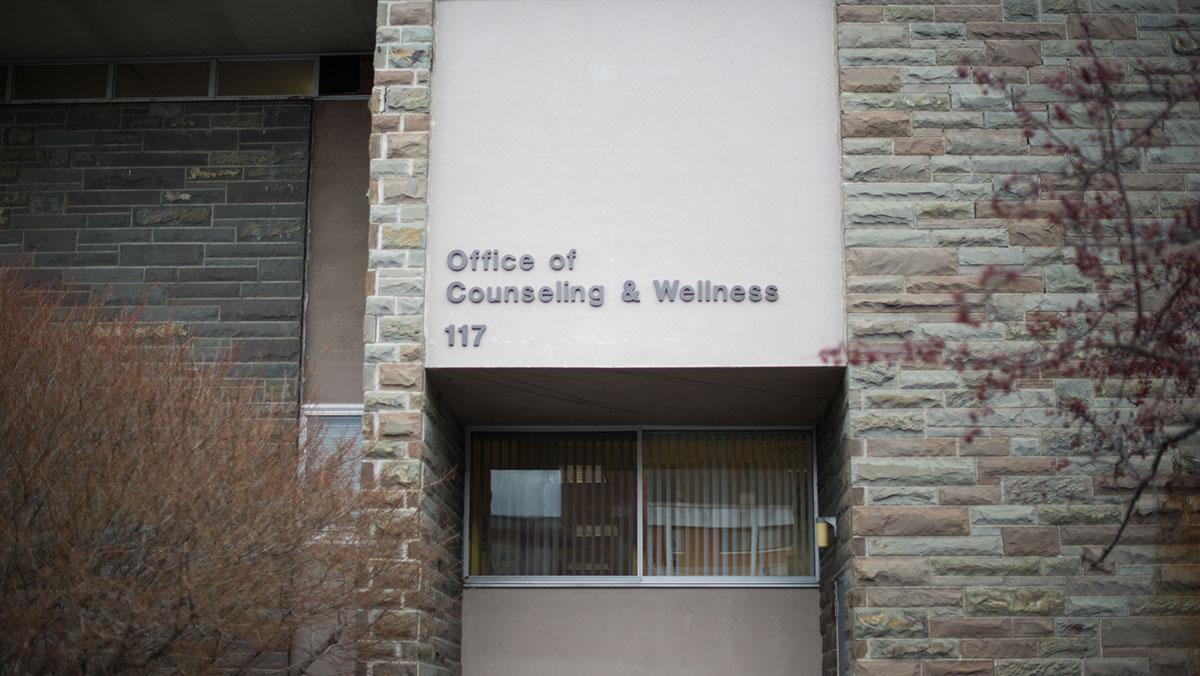 Tommy Battistelli/The Ithacan
Keeling and Associates found that health services on the college’s campus are not organized effectively and do not have up-to-par operational effectiveness.
By Maia Noah — Contributing Writer
Published: December 12, 2018

After analyzing annual reports, student surveys and national data, Keeling and Associates found that health services on the college’s campus are not organized effectively and do not have up-to-par operational effectiveness. It was found that the college lacks a clear vision or strategy for dealing with student health in the report published Nov. 5.

The executive summary came to the conclusion that the Hammond Health Center’s student-provider ratio of 1,552:1 is better than the normative range for college health services, which is approximately 2,000:1 to 2,500:1. However, according to the report, in many cases students have had to find services elsewhere due to the inability of the health center and the Center of Counseling and Psychological Services (CAPS) to meet student demand. The report also found that a major element of this accessibility issue was a lack of appropriate access to counselors after hours. The college also funds the health center and CAPS through an operating budget. The summary found that this single form of funding is not enough to guarantee a sustainable, effective model. 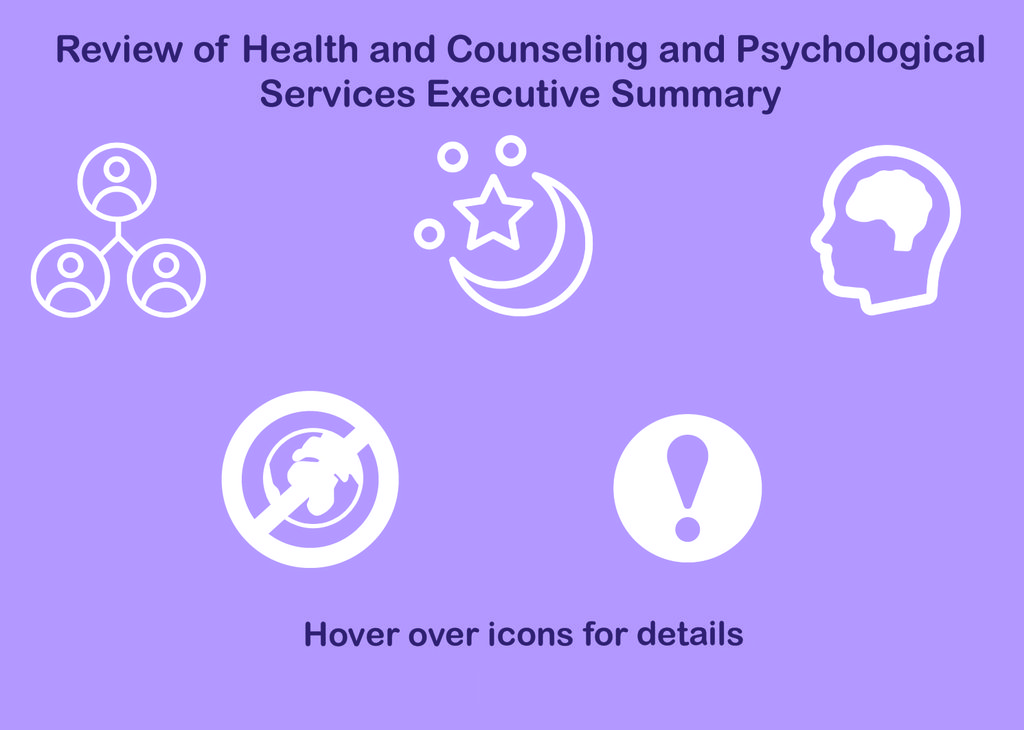 As a result of these findings, one major component of the report that the college is currently focusing on, said Rosanna Ferro, Vice President of Student Affairs and Campus Life, is the conclusion that there has been a lack of proper senior-level leadership to effectively advocate for and organize appropriate health and counseling or mental health services for students. The college launched a search for an executive director of student wellness in November.

“One of their major recommendations was for us to have a high–level administrator reporting to me that could have oversight,” Ferro said. “In the previous leadership structure, we had a director that was both the director of CAPS and the health center overall. So, it didn’t really facilitate an integrated approach.”

Ferro said she is currently working to ameliorate the dissatisfaction many students have addressed about difficulty making appointments and having to go off campus to have their needs met. She said she is also starting to look at the findings in the executive summary in order to create more accessible and effective services. Ferro said she plans to begin by tackling the current underlying structure of these services.

Ferro said that aside from addressing leadership in health services on campus, the college is also examining the evolving needs of students.

“Our current structure and practice has been in place for a long time, and the reality is that the challenges our current students are facing are very different than they were even five years ago,” Ferro said. “We’re seeing more and more students with mental health concerns, and our traditional methods aren’t really addressing those needs.”

As a result of this increased student demand for mental health services, CAPS has also added two new counselor positions. The first new counselor started in August, and the second, which was recently filled, will start in January.

Ferro and other administrators are also starting conversations about addressing the need for access to after-hours counselors. She said that from 3 p.m. to 11 p.m. is usually when the bulk of after-hour calls come in due to the fact that the health center closes at 5 p.m.

“The reality is that we can’t ask the same staff until 5 p.m. to stay because that would take away from the daytime availability, so we have to come up with different options,” Ferro said. “So, one of them is a third party that we’re looking at. We’re researching now, and then we’re trying to see if we can be creative with having a staff person once in a while shifting. And then they would have to kind of change their hours during the day.”

When it comes to funding the health center and CAPS, Ferro said that the college is not necessarily looking to re-evaluate its sources of funding.

“We aren’t looking at anything else,” Ferro said. “It is costly to come here, and this is part of your tuition dollars. There are different models, and some institutions have a wellness fee. We don’t necessarily feel that that’s the way to go. That’s another fee that we would have to add to students. So, we’re trying to be creative around existing funding sources that we have.”

Students widely believe the health services on campus do not adequately address their needs, according to the report.

Freshman Libby Mosher said she thought it was crucial for her to come to a college that offered adequate mental health services. The college promised her that CAPS would be able to provide sufficient services, she said.

“The therapist here can only see me once every … three weeks, so it would end up being over 21 days between visits, which is really not going to do anything,” Mosher said.

Junior Ari Domeraski said he was born with a heart murmur. He has a thyroid condition as well as several others such as tendinitis, depression and anxiety, he said. When he decided to come to the college he wanted to focus on his career and was set on the college’s Theatre Arts Management major. However, Domeraski said he felt the health center was not prepared to care for his needs.

“I was told, coming to this campus, that Hammond was my go–to place,” Domeraski said. “So, I guess it’s a mixture of building up Ithaca to be its own community, where they’ll take care of you, but the moment they don’t know something, you’re shut out of luck.”

“It’s like Ithaca is technically going above the law, but it’s like you’re doing a little bit above the bare minimum,” Wildes said. “Do more.”

Freshman Gabrielle Dixon said she believes the services at the health center are adequate for basic needs. She said the hours of the health services on campus are not sufficient.

“One time I got really sick at 11 p.m., and I wanted to make an appointment for the next day, but unless you have an urgent care type situation, you can’t do that online,” she said.

Instead of taking the executive summary as criticism, Meilman said she and other staff in CAPS are determined to improve the mental health services it offers. They are aware that the improvement of their services is crucial, she said.

“We successfully serve many, many students every year and we know this from the positive feedback we hear,” Meilman said. “We also know there are many students who do not get all the counseling they need at CAPS because the numbers of students seeking services grow at a faster rate than the resources. We are committed to finding innovative ways to serve more students with our existing resources.”

Meilman said the search for a permanent CAPS director has not yet begun. The previous director, Deborah Harper, retired from the position in August.

Ferro said her end goal is for students to feel accommodated.

“I want the services to be seamless and I want our students to be able to walk in whatever door of the building and feel like their needs are met,” Ferro said.

Past Deadline: Get CAPS Ready — how mental health help has evolved at IC