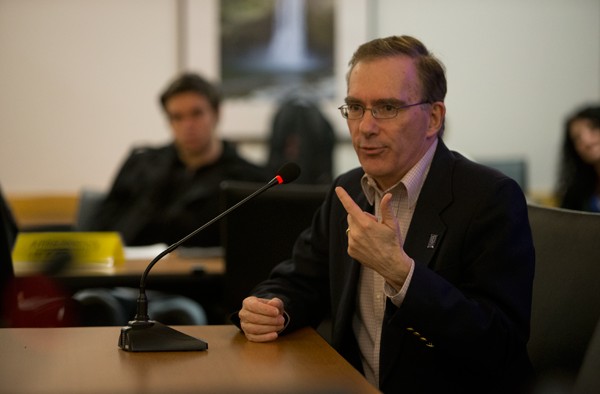 Ithaca College President Tom Rochon openly discussed student concerns with members of the Student Government Association in his second meeting with the SGA for the 2012-13 academic year Monday.

During the hour-long discussion, Rochon spoke about the changes that will be brought about by the IC 20/20 strategic plan and the cost of attending the college. Rochon also addressed several questions from SGA members, including online courses and concerns about the quality of communication between the administration and the SGA.

Junior Colin Covitz, senator for the school of Health Sciences and Human Performance, said he was surprised by how open Rochon was during the meeting.

“I’m used to President Rochon kind of beating around the bush a little bit when he answers questions, especially the tougher ones,” he said. “I felt that he was much more open than usual with us.”

Representatives from Information Technology Services and the college library also attended the SGA meeting to discuss a proposed new print management system, in which students would be given a 150 to 200 page printing limit per semester and would have to pay per copy after the limit is reached. The recommendation is currently under review. If approved, it will be implemented in Fall 2013.

Rochon began his address by highlighting the importance of the first year experience.

He said the incoming freshmen will experience the remodeled First Year Residential Experience, have access to the newly created Center for Advising and Achievement and be a part of the the student alumni mentoring network, all of which are detailed in IC 20/20.

Freshman Elijah Breton, senator of the Class of 2016, commended this focus on freshmen. However, he said he hopes there will be greater emphasis on upperclassmen in the future.

“It’s one thing to get a student into the college and have a great first year experience, but I also want to make sure students are getting a good sophomore and junior year experience as well,” he said.

Rochon also discussed the White House College Scorecard, which was released by the Obama Administration in February. According to the scorecard, the the average net cost of attendance for undergraduate students at Ithaca College is $31,811 per year, putting the college in the high zone in terms of cost.

Rochon told the SGA he is aware of the college’s placement in the “red zone” and said the college is working to reduce these costs. He said there will be changes in the expenses of the college administration in 2014.

He said the decision was for the better, because it helped combine two divisions of the college that previously had no communication with each other. He said as a result of this merger, the First Year Residential Experience came into being.

Ayesha Patel, vice president of campus affairs, said she was concerned about the lack of communication between the administration and the SGA.

Rochon responded saying he was invited to a public SGA meeting once for the whole academic year. He sought feedback from SGA members about instances of such miscommunication, and Patel said SGA members would have liked to have been notified of announcements about the student media policy and the Huron recommendations ahead of time rather than waiting to find out at the same time the rest of the college did.

Speaking to The Ithacan, Flaherty said he hopes for better dialogue between students and the administration.