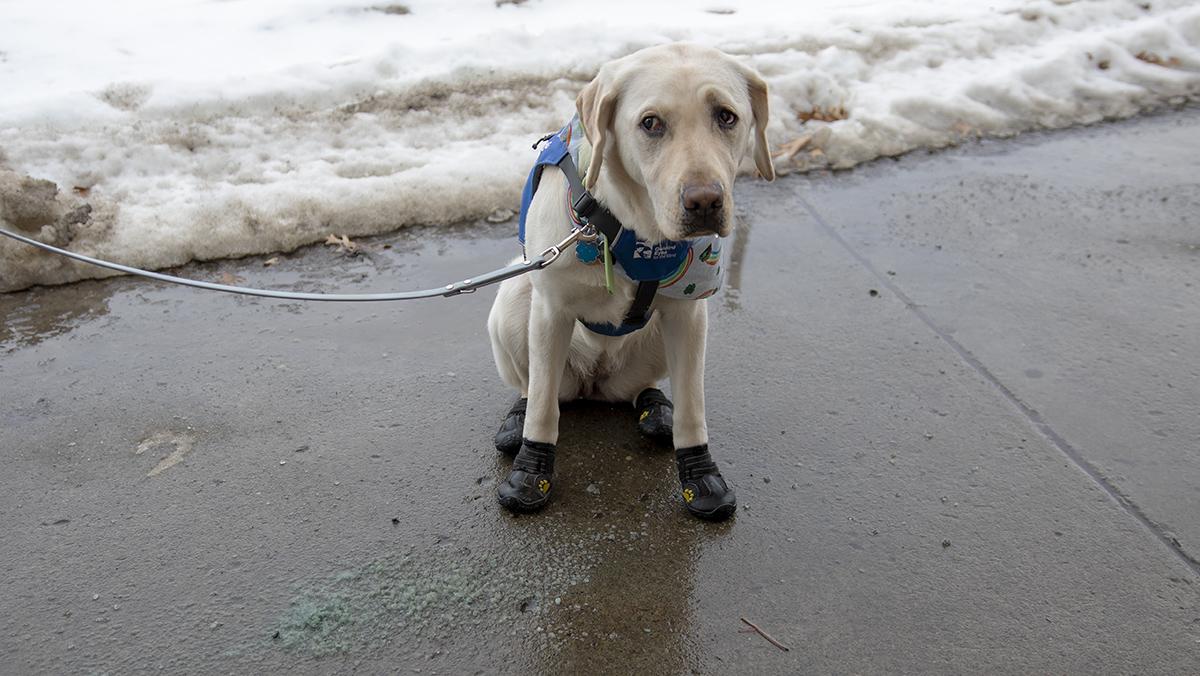 Katelin Bradley/The Ithacan
Preventative measures like paw wax and booties can be used to protect paws from dangers on the ground like chemicals, ice and concrete.
By Olivia Stanzl — Assistant News Editor
Published: March 2, 2022

Senior Stephanie Serra was walking Adele, her yellow Labrador Retriever, on the Ithaca College campus after the first snowfall of Spring 2022 when she realized something was wrong.

“I was taking her to one of her sitters … and she started limping and was really favoring one paw. … It’s not like she pulled anything,” Serra said. “I ran my hand down her leg and stretched it and did everything and it looked fine. … Her sitter ended up finding a piece of salt that had gotten stuck in between one of her paw pads and it made it [Adele’s paw] bright red and irritated.”

Rock salt is used to de-ice roads and sidewalks, an essential safety measure in places like Ithaca, which receives an average annual snowfall of 65 inches according to U.S. Climate Data. The most popular rock salt used is composed of sodium chloride, which is also the least pet friendly, according to studies. Salt based ice melts are hazardous to dogs. When ingested, the melts can cause salt poisoning, which causes a range of symptoms. These include upset stomachs, seizures or, in the worst cases, death.

Guiding Eyes for the Blind is a national nonprofit organization that works to breed and train dogs that eventually become guide dogs for people with vision loss. On the college’s campus, five guiding eye dogs are currently under the care of individual students, including Adele and her caretaker Serra.

The college’s club has members who work as sitters, raisers and general body members who educate the campus community on Guiding Eyes for the Blind. Raisers, like Serra, provide a home for the dogs while teaching them skills and taking them to classes to prepare them to guide people with vision loss.

Senior Kelli Friedman, co-president of Guiding Eyes for the Blind, has been a part of the club since her freshman year. Friedman said every year after break is when club members notice the salt impacting their animals. Friedman said it is essential for the group to take safety measures when it comes to caring for the dogs’ paws.

“Sometimes it’s not about if the pup displays sensitivities to the salt, but also we want to keep them safe,” Friedman said. “Even if they’re not feeling it, it’s so important for them to be protected from even being put in contact with the salt, let alone feeling the sensitivity that happens if you are sensitive to salt.”

The college uses Cargill’s Clearance product, which is a sodium chloride that is treated with magnesium chloride. Tim Carey, associate vice president of the Office of Facilities, said the product was selected because it is more environmentally friendly and less corrosive than common rock salt.

“It would be cost-prohibitive to change to another product that could be attained in the bulk amounts that are needed,” Carey said via email.

Carey said the college switched to Cargill’s Clearance product over a decade ago because it is better for the environment and it could also be bought locally in bulk.

Senior Brielle Long has also been a part of the club since her freshman year and is co-president. Long said that the dogs facing issues because of the ice is something that has happened every year, but this year the group has noticed an increase in rock salt around campus.

Friedman and Long believe it could be because of the inconsistent weather. When temperatures fluctuate from below to above freezing, the snow is able to melt on its own. On Feb. 3 Tompkins County received over 10 inches of snow, yet, by Feb. 18, the temperature reached 54 degrees.

The amount of salt that can be dissolved in water has its limits, leaving excess salt exposed on walkways according to Safe Paw, a company that makes a pet-safe ice melt product.

Friedman, who is an occupational therapy major, said she understands that people benefit from the ground not being icy.

“We acknowledge that it’s something important that [Office of Facilities] continue to do, that they continue to use rock salt to keep the campus community safe,” Friedman said. “We do educate on our end, in terms of our population of people that work with the pups, to ensure that they are educated on how to be safe.”

Preventative measures like paw wax and booties can be used. Paw wax prevents paws from dangers on the ground like chemicals, ice and concrete. Serra opted to put booties on Adele before taking her onto campus.

“The booties have helped immensely,” Serra said. “She doesn’t necessarily like them, but we kind of need them.”