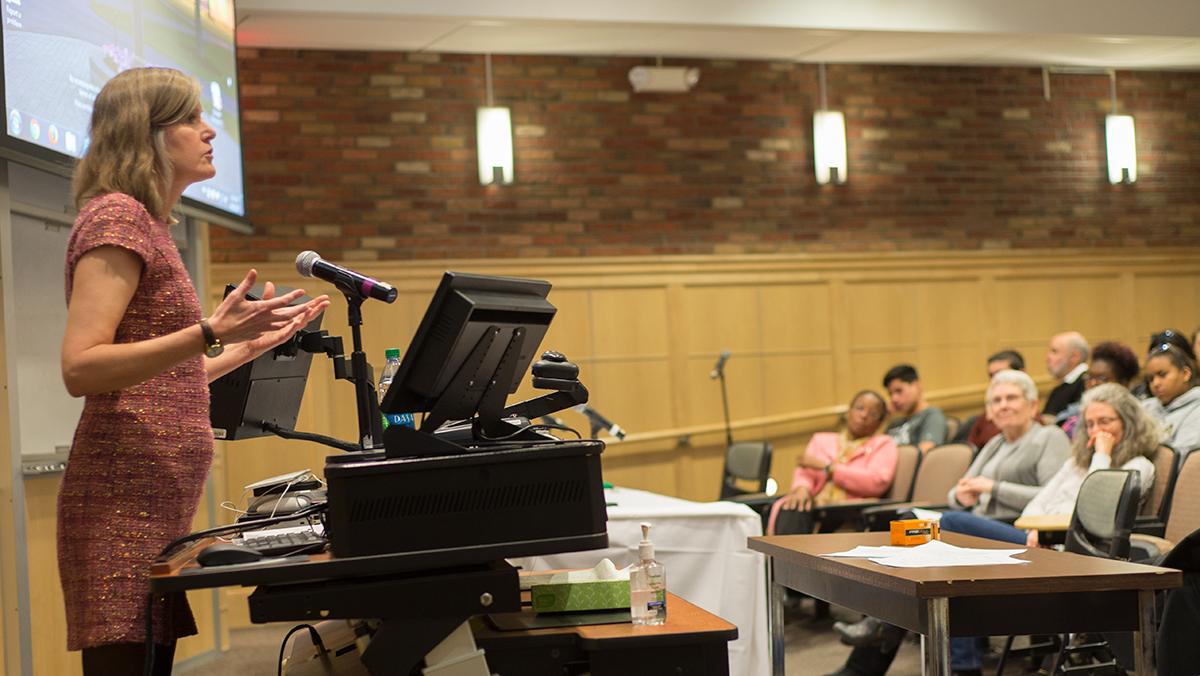 Fernando Ferraz/The Ithacan
Sandra Steingraber, a distinguished scholar in residence in the Department of Environmental Studies and Sciences at the college, hosted a panel discussion how climate change intersects with social activism.
By Meaghan McElroy — Staff Writer
Published: April 19, 2017

As part of Sustainability Week at Ithaca College, environmental activist and writer Sandra Steingraber hosted a panel of climate activists to present on intersections of climate change and social issues in the presentation Climate Change at the Crossroads at 7 p.m. April 18.

Steingraber is a distinguished scholar in residence in the Department of Environmental Studies and Sciences at the college who has received numerous national awards for her work in environmental science and led protests against a new natural gas storage facility at Seneca Lake. She said she was inspired to hold the panel after the results of the presidential election in November when she and Marlene Barken, associate professor in the legal studies program, shared their worries about the future of climate science.

“The idea of climate at the crossroads came into my mind just kind of spontaneously — the idea that climate exists at some kind of intersection with all these social problems,” she said. “As I began to think more about it, I wanted to find speakers to address these intersectionalities.”

Around 100 students, faculty, staff and Ithaca community members attended the event in Textor Hall, which was sponsored by the School of Business. Tanya Saunders, assistant provost in the Department of International Programs and Extended Studies, opened the evening by saying that the denial of climate change is the denial of human rights.

“The corporate disregard for the health of our land, water and air parallel blatant political opposition to health care, affordable housing, quality public education, legal justice and protection before the law,” Saunders said. “Our shared concern for the environment and the evidence of climate change may bring us together in acknowledging that the destruction of the environment and the manipulation of nature is not unrelated to the historical disregard to human life and dignity.”

Each panelist gave a 10-minute presentation to talk about an issue they were knowledgeable about and how that issue is impacted by climate change. The panel consisted of Anthony Rogers-Wright, climate justice leader and the policy and organizing director for the nonprofit Environmental Action, who spoke about the intersection of race and climate change; Lisa Marshall, community organizer for Mothers Out Front, who presented on the way that climate change will inordinately impact children; Colleen Boland, retired Senior Master Sergeant in the U.S. Air Force, who presented on the ways national security and veterans are impacted by climate change; Mahad Olad, a student at the college, who spoke about the intersection of Muslim issues and climate issues; and Peter Bardaglio, representative of the Tompkins County Climate Protection Initiative and former provost at the college, who presented on the economic issues of climate change.

Though their topics and interests varied, the panelists all spoke about human-centered impacts of climate change.

Marshall, a mother of three, spoke about her concerns for her children growing up in a world being impacted by climate change. She said she watched her kids become increasingly distressed as they learned about issues concerning climate change. In particular, she said her youngest son, Charlie, became depressed as he learned more about the BP oil spill that occurred in the Gulf of Mexico in 2010, which is considered the largest marine oil spill in history.

“That was the first time that I thought, ‘Oh, my God, what have I done? I’ve brought children into this world,’” Marshall said. “I’m an earth scientist. I know about climate change. … I knew all these things were coming, and I didn’t know what to do. I lived life like everyone lives it. I wanted kids, so I had kids.”

Members of the audience were encouraged to stay after the presentations to participate in a short question-and-answer session with the panelists.

Freshman Jeremy Doele attended the event and said he thought the panelists brought a good mix of perspectives.

“There was a real sense of urgency in all of their presentations,” he said. “That was a really consistent theme that I saw. I support that 110 percent.”

Steingraber closed the event by encouraging members of the audience to participate in the March for Climate, Jobs and Justice at 11:30 a.m. April 29 on The Commons and to tell their friends about the upcoming event.

“Talking about why you’re acting is a powerful way to begin that conversation,” Steingraber said.