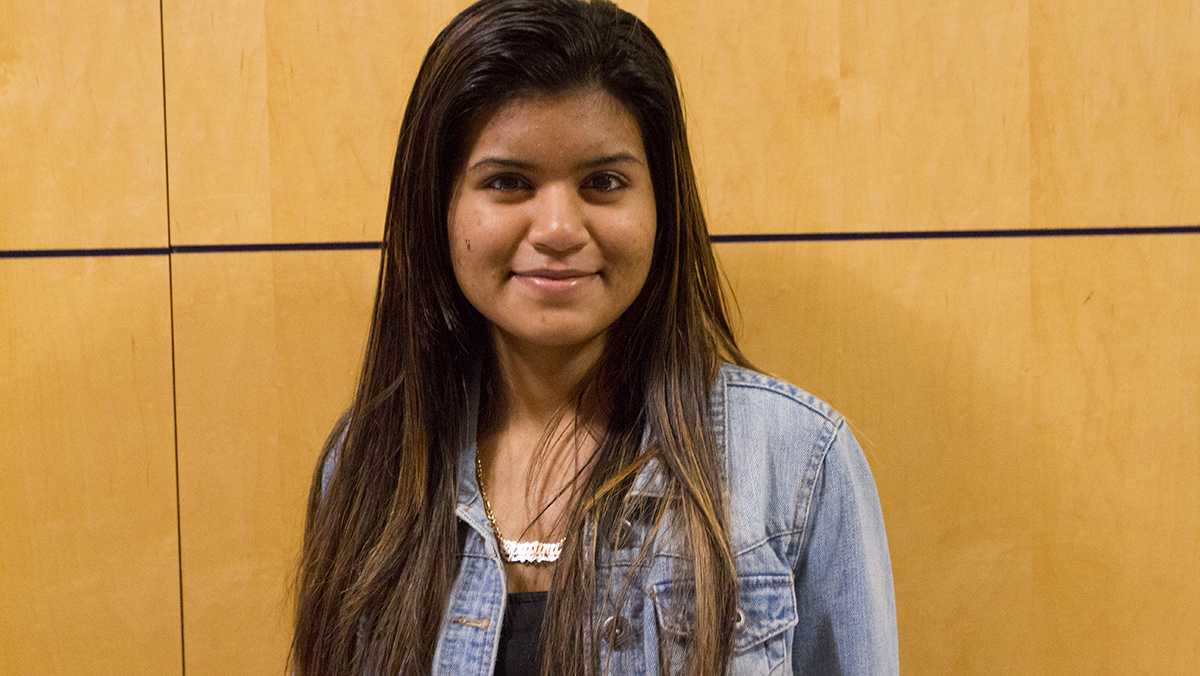 Maxine Hansford/The Ithacan
Freshman Christina Lachman, a HEOP and CSTEP student, said she is grateful that no funding was reduced to the programs that allow her to attend Ithaca College.
By Bianca Mestiza — Staff Writer
Published: May 2, 2017

The programs faced a potential 15 percent reduction in funding for the 2017–18 fiscal year in Governor Andrew Cuomo’s executive budget. Michael Molina, president of the Association of Program Administrators for CSTEP, said the governor and legislators were able to negotiate a deal to restore funding for the programs; however, this still did not meet the program’s goals to increase funding another 15–20 percent.

The HEOP and CSTEP programs help students from disadvantaged backgrounds by giving them government-funded scholarships to attend institutions across New York state. Molina said that for the last couple of years, the programs had been receiving funding increases, so to see the programs face a cut was disappointing.

“We had hoped for an increase in funding, and what we were able to achieve was only the restoration, only the 15 percent that the governor had proposed in his executive budget,” he said. “So what that means basically is that in the next fiscal year … all the other opportunity programs will have the same amount of money as they did this current year. So it’s disappointing because there’s plenty of money to go around.”

Orlando Kittrell, director of the Office of State Grants at the college, which oversees HEOP and CSTEP, declined to comment for this article.

Tiffany Valentin, CSTEP project coordinator and counselor for the Office of State Grants, said she was glad the funding was restored because it is needed to support the students.

“We help fund students to take advantage of a lot of experiential learning opportunities that they would not be able to take advantage of otherwise,” Valentin said. “And this helps them with their career and being prepared and making them more competitive when they’re applying for jobs and grad school.”

Students had mixed reactions to the news that HEOP and CSTEP program funding would not receive a cut. While the legislative budget adds were relieving, some said they were disappointed the programs did not get an increase.

Freshman Leonardo Wise, who is part of both the HEOP and CSTEP programs, said he is thankful that funding was not reduced but said it would have been better if there was an increase in funding for the programs because students would have more opportunities.

“Overall, I think it’s a good thing,” Wise said. “But considering the fact that it didn’t go up like it usually does, I’m kind of skeptical as to why that happened.”

Freshman Christina Lachman, a HEOP and CSTEP student, said she is at least grateful that no funding was reduced.

“I think it’s actually really great because if it was being reduced, then we would lose a lot of our funding, and we wouldn’t be able to have workshops that actually help us study for classes,” she said. “For me, personally, I got to OSG for everything because I feel like it’s family there with all the students from the program there.”

Wise said he thinks that with the funding the program has now, HEOP and CSTEP are doing as much as they can to help their students, but with limited resources.

State scholarship program may lose funding for next fiscal year