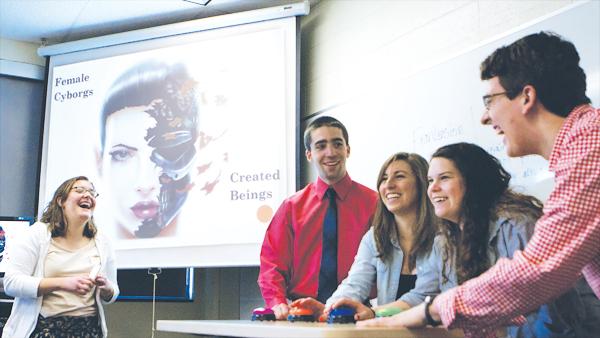 Four months after Ithaca College junior Victoria “Tori” Howell died in a car accident, the college is revisiting and celebrating Howell’s life by celebrating her passion for all things fantasy and science fiction.

The college will host the inaugural Tori Cup: Fantasy and Science Fiction Challenge on Friday, when teams of students from local middle schools, high schools and colleges will come together to test their knowledge of sci-fi and fantasy.

The Tori Cup is named in honor of Howell, 20, who died after being rushed to the hospital following the Dec. 30 car accident in Dryden.

Howell was an English major with a minor in psychology. During the fall of 2011, she studied at the Ithaca College London Center. She also worked for local favorite Purity Ice Cream and Ithaca College Dining Services, and she was a dedicated member of the college’s Harry Potter Alliance.

Katharine Kittredge, professor of English and one of the advisers of the Tori Cup, said the event would benefit people like Howell.

“[Tori is] somebody who grew up in the Ithaca area loving books, loving everything that was fantasy and science fiction,” she said. “What we wanted to do was to find a way to memorialize her that would support kids who are like her, who are growing up in Ithaca loving these things and wanting to find similar kids to share their passion with.”

The event is being coordinated by senior Ashlyn Velte, who was one of Howell’s friends, and senior Jocelyn Bress. It will take place in Textor and Friends Halls and is open to the public.

Elizabeth Bleicher, associate professor of English and one of the advisers of the event, said the Tori Cup will bring together people with similar interests.

“[The Tori Cup] is an opportunity to really … celebrate everything that you know, and you get celebrate with people who enjoy having that kind of knowledge,” she said.

The challenge will be a Jeopardy-style game, where teams of four will answer questions on a range of science fiction–related topics, such as Harry Potter and Star Trek.

Registration costs $10 per team of four, and walk-in registrations for all the divisions will be accepted. Proceeds of the benefit will go to social justice causes, the college’s Harry Potter Alliance and Massachusetts-based foundation This Star Won’t Go Out, which assists families with children who have cancer.

The Tori Cup challenge is a part of the college’s annual science fiction conference. This year’s conference title is “Pippi to Ripley: The Female Figure in Fantasy and Science Fiction” and will take place Friday and Saturday.

The conference, which was first held in 2011, is also sponsored by the Ithaca Community Arts Partnership’s “Spring Writes Literary Festival.” The conference will welcome participants from across different states, including California, Michigan and Ohio.

The winners of the Tori Cup challenge will receive copies of a book signed by Tamora Pierce, popular sci-fi author and conference keynote speaker. The event will also serve free ice cream provided by Purity.

“It’s a fabulous thing,” she said. “As an inaugural event, it’s going to be a little hard to get off the ground, but I think that with a bit more promotion, it will be a wonderful thing.”

Junior Grace Wivell, who is helping organize the Tori Cup, said planning the event brought back powerful memories of her friend Howell.

“This is the sort of event that every time we are working to plan it, I can’t help but think that this is the kind of thing that Tori would make us do,” she said.

Furthermore, the college’s English department is also planning to name an annual book prize after Howell. The prize will be awarded to outstanding English majors or minors whose academic or extracurricular work reflects Howell’s intellectual interests and values.

Kittredge, who had worked closely with Howell during her time at the college as an English major, said planning the Tori Cup kept the memory of Howell alive.

“While organizing the Tori Cup, we said Tori’s name every day,” Kittredge said. “We say it in connection with a thing that she loves … I wasn’t close to Tori as the students who are organizing it — they were her best friends. I know there are still days when they miss her horribly. But I think that being able to have a way to think about her that’s positive and active, instead of being sad, has been helpful.”