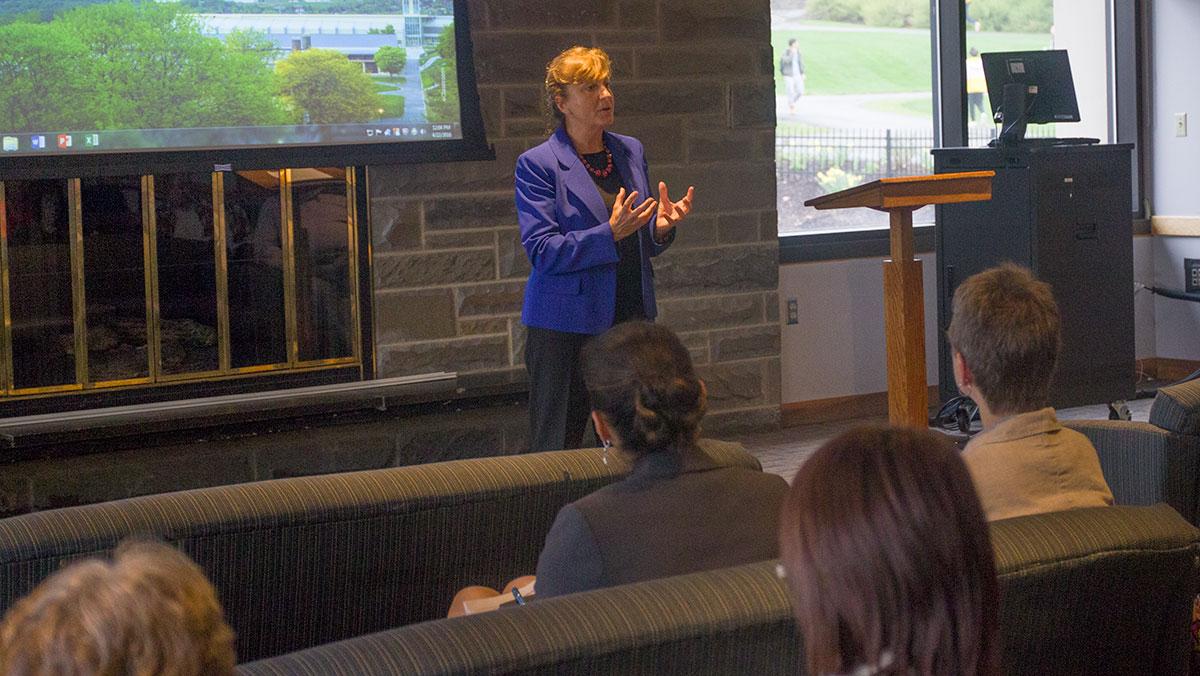 The second candidate for the open position of vice president for enrollment management at Ithaca College discussed increasing retention rates, diversity and overall student success during her visit to campus April 22.

Sandra Starke is the current vice provost for enrollment management at Binghamton University. She has been responsible for the recruitment, marketing, enrollment and retention of the university’s undergraduate students for approximately 17 years. She served the university in several other roles, including assistant vice president of finance and planning, before securing her current position.

Starke introduced herself as “high-energy, optimistic and solution-driven” during her presentation. She said her enrollment management philosophy is that efforts for retention and recruitment extend across campus: Everyone is responsible for attracting and retaining students through the campus experience.

“Enrollment is not a person. It is not an office — it is a philosophy on a campus, which is embraced by the campus culture,” Starke said. “It is holistic. It’s from the maintenance people who are making the place beautiful, to the office who is keeping alumni connected, and that’s feeding recruitment and the student body.”

Starke spoke about her experiences at Binghamton, where she used her knowledge of finance, data and research to create plans that helped to increase enrollment and diversity simultaneously. She said it is vital to have diverse perspectives on campus.

“You can’t be a great institution without having socioeconomic, racial, ethnic and geographic diversity,” Starke said.

After her introduction, Starke opened the floor for questions. When asked what her plans would be to increase diversity on campus, Starke said she would look at community-based organizations in larger cities to create pipelines for students to come to the college. She also said she would use data to determine where minority students are located so recruiters can concentrate their efforts and build connections in those areas.

Starke said what drew her to the college was its size and collaborative spirit. While Binghamton University is larger than Ithaca, she said, there are advantages to being a smaller school.

“Ithaca is absolutely poised to do really well with student success,” Starke said. “You give students so much, and you can do that because of your size. But I think you can even do more.”

She said another thing that attracted her was the IC 20/20 plan, which she described as flexible and distinctive.

“It provides Ithaca with a distinction that I think is going to be really important to prospective students, faculty, alumni and recruiters who are looking at your students on campus to hire them,” Starke said.

In the latter part of the forum, Starke asked audience members if she was offered the position, why she should come to the college.

“There have been a lot of things in transition lately,” Stern said. “Which I think is really an opportunity for the vice president of enrollment to help shape organization in ways that can move the institution forward in achieving its goals.”