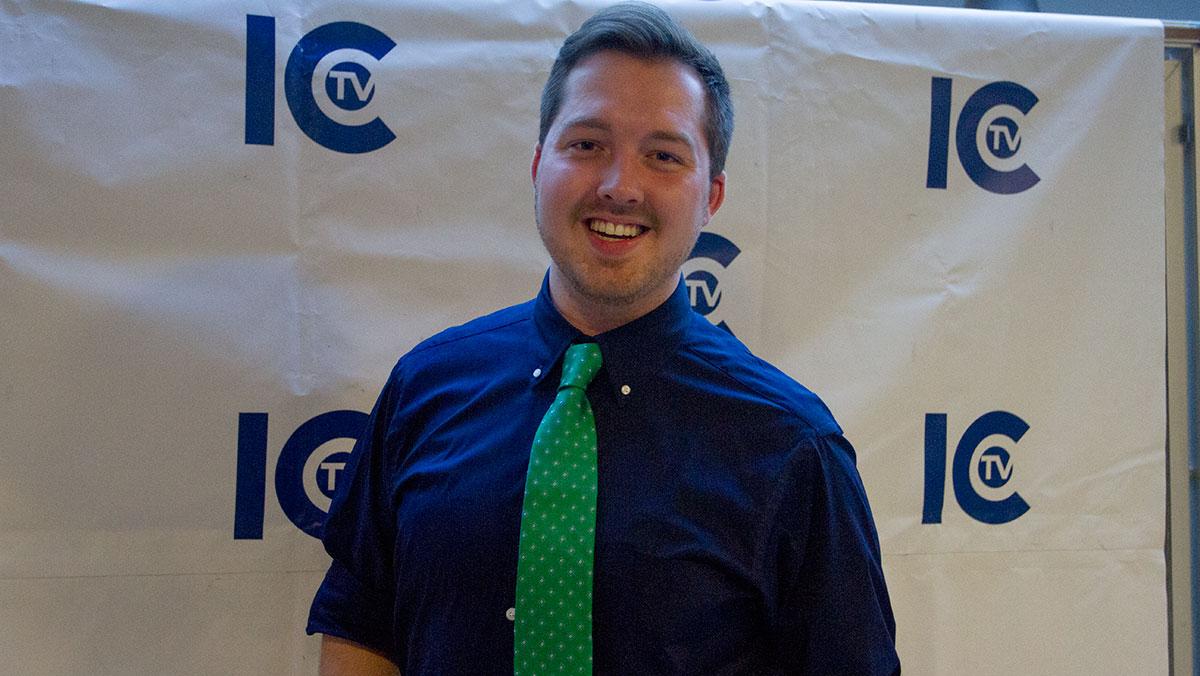 Matt Gurbarg/ The Ithacan
Senior Ben Poppleton stands on the red carpet at the premiere of “The Ivies,” an ICTV show he co-wrote, co-produced and directed. Poppleton is involved with both ICTV and IC Players.
By Aliza Sessler — Staff Writer
Published: April 22, 2015

He has always loved theater, having been involved in the theater department throughout his high school years. Upon entering college, Poppleton knew he wanted to channel his creativity into a career in communications. He discovered he could pursue his passion for the performing arts as well.

“When I got here and realized how good both of those communities were … [I realized] I can do both of those things,” Poppleton said.

Poppleton decided to double major in both cinema and photography and theater studies with a focus in producing and directing.

“The goal would be to go back and forth between both in the future because I love both so much,” he said. “I have done various internships with both areas. They go hand in hand.”

During his semester in the Los Angeles Program in Spring 2014, Poppleton interned for Imagine TV, working on the base script for the TV show “Empire” on Fox. During that same time, Poppleton interned with the creative team at Heroes and Villains Entertainment, a developing company that is credited for producing several comic books, novels and movies such as “Horrible Bosses” and “Miss Peregrine’s Home for Peculiar Children.” This past summer, Poppleton interned at ACM Talent Agency in New York, a company that specializes in voice-over talent.

“That was really cool because that is an aspect of the industry that you do not really think about,” Poppleton said.

During his time at the college, Poppleton became involved with ICTV. Chris Wheatley, manager of TV and radio operations, praised Poppleton for his producing and writing skills. Wheatley said he met Poppleton when he was pitching the series “Boys of 213” in the spring of 2013.

“As one of the producers, Ben took his role very seriously,” Wheatley said. “As the production of the show progressed, Ben was like an expectant parent. The final product was a terrific example of how good a scripted comedy can be, even with a small budget.”

This semester, Poppleton wrote, produced and directed the show “The Ivies,” a project that he had been working on for a year and a half prior to its production. It premiered April 18 to a full auditorium in the Roy H. Park School of Communications.

Senior Hannah Berg, who worked as the director of photography on “The Ivies,” commended Poppleton for his excellent directorial skills.

“He brought his knowledge of acting and directing from studying in Dillingham together with his knowledge of filmmaking from the Park School in a way that highlighted both cast and crew performances,” she said. “On set, Ben always knows what is happening at the moment and 10 steps ahead — a difficult task.”

Additionally, Poppleton currently serves as the artistic director for IC Players. Last semester Poppleton showcased his artistic directing abilities when he co-directed “Anna and the Tropics.” He also said he changed IC Players from being an organization funded by ticket sales to one funded solely by donations. Poppleton said the money is donated to centers for the lesbian, gay, bisexual and transgender communities, such as Out for Health, the Advocacy Center for Tompkins County and Planned Parenthood.

“All the money we get from people buying tickets goes to a group in the community. Hopefully that is something they’ll continue when I leave,” Poppleton said.

Poppleton is recognized by the Leadership Scholars Program, which awards students who demonstrate exemplary leadership skills and academics. He has also been a Lead-In leader, helping to lead a program designed to prepare first-year students to become involved and take on leadership roles on campus held prior to the start of classes. He was also an orientation leader. Michele Lenhart, director of student leadership and involvement, said Poppleton was an exemplary leader on campus.

“His active involvement in numerous student organizations, volunteer events and leadership workshops is impressive,” she said.

Poppleton said he sees the college as a community in which the members support one another.

Looking back on his college career, Poppleton said his best advice for incoming students and current students is to step outside of their comfort zones.

“All the things I ended up doing and loving here at IC were because I took risks,” he said. “Try everything, and don’t be afraid that it might fail.”