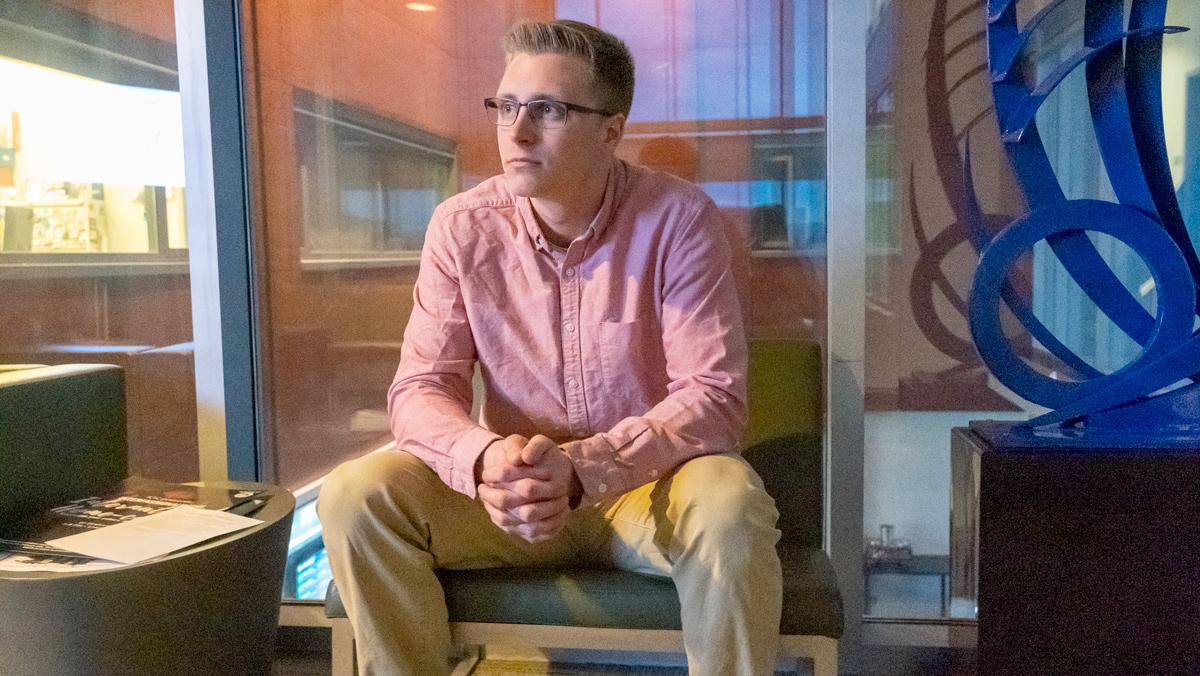 John Vongas, assistant professor in the Department of Management, who has taught Lapinski’s said Lapinski possesses a unique ability to be a leader who listens.

“Having the approach that Drew has — meaning that he has a sort of openness to not only experience but sort of a respect for a multitude of different ideas sometimes that don’t necessarily coincide with his own — is I think of huge asset,” Vongas said.

Lapinski was voted by his fellow club members to win the club’s Klein Award, an annual honor that recognizes seniors who have made significant contributions to the group. Lapinski was given the award for his listening and leadership skills, said Scott Erickson, DANA professor and chair in the Department of Marketing and the group’s advisor.

The award was created in the 1980s to honor alum Dara Klein for her hard work and dedication, Erickson said.

AMA is a national organization that aims to “provide the marketing leaders of tomorrow… with the resources and skills to shape the industry,” according to AMA Collegiate’s website. There are approximately 325 collegiate chapters across the country.

For his first two years at the college, Lapinski served as a general body member on ICAMA. His peers voted to elect him as president for his junior year. As a senior, he has shared the role of president with senior Ryan Nadeau.

Lapinski said he has dedicated a lot of his time in college to the club.

“I kind of just devoted all my marketing time toward AMA but it’s been very rewarding,” Lapinski said. “There’s a lot of work that goes into it, so it takes up a lot of time. And, to be honest, I’m very happy that I decided to just focus my attention on AMA.”

In his first year as president of the chapter, he helped the team earn its spot in the top 25 AMA chapters. ICAMA placed in the top 25 in 2018 for the first time in years.

“Being named one of the top 25 chapters was just extremely rewarding because it really just showed that even though we came in, and we didn’t really know too much about what we needed to do, we were able to get our job done, and do well with it,” Lapinski said.

Senior Rachel Cadet, vice president of community impact for ICAMA, said Lapinski has been dedicated and committed to AMA throughout college.

“He has been a huge impact since being the president of AMA,” Cadet said. “When he was first elected, he had a whole new e-board. Through hard work and organization, the chapter was still able to place in the top 25 at the intercollegiate competition.”

As president, he is also responsible for ensuring that ICAMA remains a recognized chapter, a task that Erickson said entails submitting an annual chapter plan at the beginning of the year and an annual report at the end of the year. This includes detailing the events the group has put on to advance students in professional development, such as hosting LinkedIn and Adobe Suite professional development workshops, Erickson said.

Outside of AMA, Vongas said Lapinski has been involved with Beta Gamma Sigma, an honor society representing the top students in the business school. Vongas said he has also served as vice president of finance and vice president of programming for The Association to Advance Collegiate Schools of Businesses, an organization that gives the business school its accreditation. The school needs to be accredited to demonstrate its legitimacy of higher learning.

Lapinski said he has had an interest in marketing and branding since high school. Once he started taking classes in college as a business administration major with a dual concentration in management and marketing, he said that he realized that he also liked to work with numbers.

He said working with marketing analytics and branding helped him combine his two interests.

During his college years, Lapinski interned with Convene, a workplace design company, in Philadelphia, and as a consumer banking intern with a branch of TD Bank in New Jersey. He said he found his internship at Convene through a connection with an alum.

“AMA really helped because it provided a lot of talking points in my interviews and showed that I was very involved,” Lapinski said.

As graduation nears, Lapinski said he is hoping for a job that allows him to do both branding and marketing analytics. So far, he said he has applied to a few jobs in Chicago.

Vongas said it is not only his leadership that makes Lapinski stand out but also his character.

“And with him, it’s also little things too, like, he’ll take the time to show gratitude,” Vongas said. “He’ll write a little personalized note by hand, and little gestures like this go a long way.”