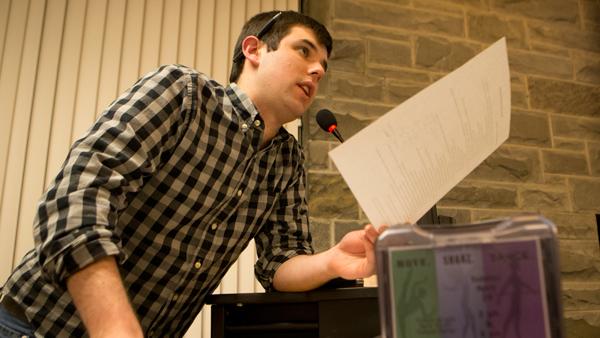 Huron Consulting’s recommendations for Ithaca College were major topics on the agenda at a Student Government Association meeting Monday. SGA discussed recommendations on billing students for Health Center services, introducing differential parking fees for students and the consolidation of the Rochester Center for physical therapy students.


The meeting began with discussions about the Rochester Center, a main component of the college’s physical therapy program. Huron recommended consolidating operations, which would save the college an estimated $600,000. A majority of SGA board members agreed that Huron’s recommendation to consolidate the center was not a good choice for the program.

The recommendation suggests charging a $10 copay per visit, seeking private insurance reimbursement as well as instituting a flat rate student Health Center fee. Huron Consulting estimates $190,650 in added revenue as a result of these recommendations.

Junior Courtney Brown, vice president of communications — along with several board members — opposed the recommendation, pointing out the major expenses that students would incur when they seek private insurance reimbursements.

“Although 80 percent of college students are covered by their parents’ health insurance because it’s more cost-effective than spending their money on school insurance, a lot of health plans are regional health plans,” Brown said. “Students won’t be able to cover the costs here at IC.”

Another concern with seeking private insurance reimbursement was that it violates student medical privacy. Sean Themea, senator of the Class of 2016, said SGA members received feedback from students who said they would not want certain parts of their medical testing history to be seen by their parents. Themea said this would also go against Health Insurance Portability and Accountability Act privacy regulations.

“If you wanted to check for an STD and you didn’t want your parents to find out, or you wanted to tell them on your own time, that concept would be eliminated, as it would show up on the bill,” Themea said. “I feel like this decision would not sit well with students.”

The final topic of discussion at the meeting was the recommendation to introduce differential parking fees for students.

Under the student fees section, Huron recommended the college increase the cost for on-campus parking, eliminate pro-rated parking permits and begin charging for on-campus employee parking. The group also recommended a change in lots aimed at deterring students living in the Circle Apartments from driving to class, taking up space for people living off campus. The savings is estimated to be between $100,000 and $290,000. Some students disagreed on the suggestions, while others were in favor of such a change.

Ayesha Patel, vice president of campus affairs, said she is not opposed to some of the changes because she believes students who live on campus should walk to class.

Comments from the SGA will be forwarded to the Institutional Effectiveness and Budget Committee, which will make final comments to President Tom Rochon.

Rob Flaherty, president of SGA, said it is important to make sure students are aware of how changes will affect them.

“On Monday, a lot of students raised concerns on health issues on campus, the Rochester campus, parking,” Flaherty said. “I think students are greatly concerned when they actually go through and see these shifts in policy and what they may entail for them. The key now is making sure students are aware of how these policy changes will affect them.”

Flaherty will be sitting on the board of the IEBC temporarily as the process moves forward. He said he looks forward to helping ensure students’ proposals are heard in the final recommendation.

“At the end of the day, we do need to find a balance between affordability and maintaining programs that benefit students,” Flaherty said. “I look forward to trying to work with the committee to find that balance.”

The feedback period for the Huron recommendations ends Monday. The recommendations are available online via Sakai and are open to students, faculty and staff for comment.