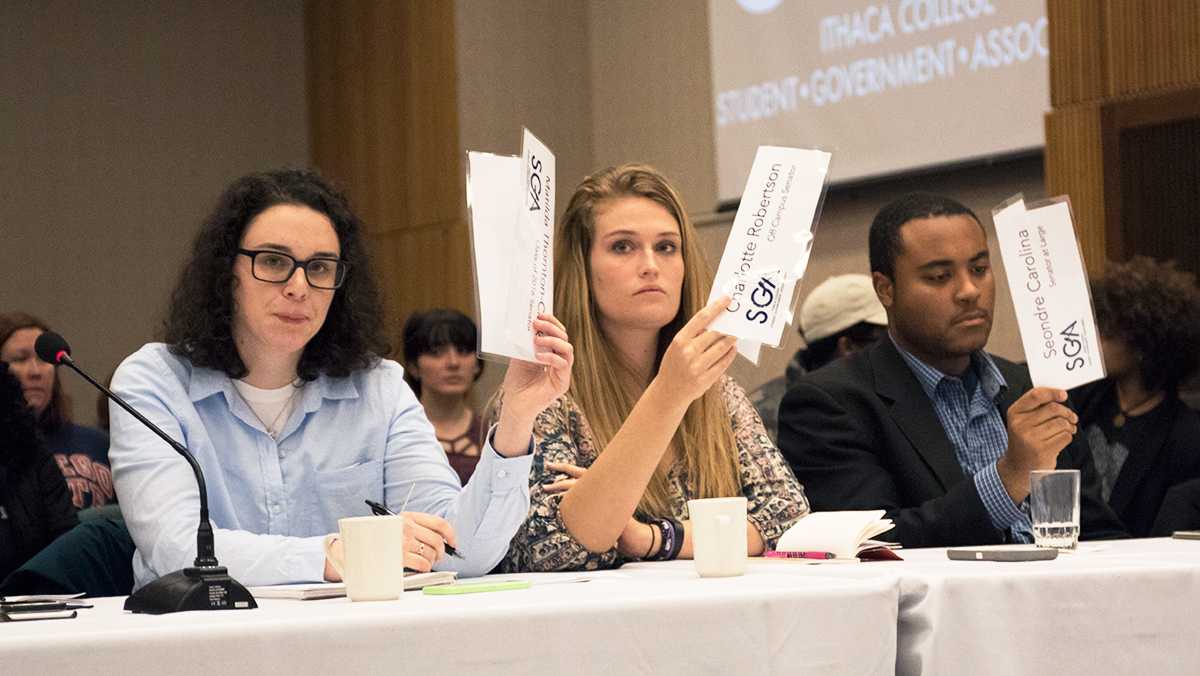 Two large pieces of legislation — a Shared Governance bill and the Student Bill of Rights and Responsibilities — were passed at the Nov. 30 Student Government Association meeting.

A Shared Governance system calls for shared responsibility among the different components of institutional government and its specification of areas of primary responsibility for governing boards, administrations and faculties. The Faculty Council and Benjamin Rifkin, provost and vice president for educational affairs, have recently revisited conversations around improving the college’s current Shared Governance model.

The bill comes as a result of students, faculty and administration expressing concern over the college’s current model and following campus–climate tensions putting the credibility of the administration into question.

SGA President Dominick Recckio said the bill aims to create a student voice that is equal to the other parties involved.

The CAC would receive recommendations from the public through a designated email account, and the suggestion would undergo an online tracking process and give status updates to the recommender and the general public. The recommendations would be heard by the CAC, which would decide on an action plan for that proposition. The CAC would also have the power to create a committee to handle the issue if no governing body exists to handle it.

Winners of the American Association of University Professors Ralph S. Brown Award for Shared Governance, such as Gustavus Adolphus College and University of Missouri, were cited in the bill as reference for the college’s new model. International institutions such as Cardiff University and University College London were also cited.

“I think that although the [no confidence] vote maybe might have been a historic vote and everything … Shared Governance is actually a more important change for the college,” he said.

The other legislation approved at the meeting, the Student Bill of Rights and Responsibilities, is an amendment to the SGA constitution and, according to the amendment, will not be enforced by the SGA or the college until it is ratified by the Ithaca College Board of Trustees. The amendment is not a static document and will continue to be revised by a council of students selected by the SGA president until it is brought to the board of trustees. Recckio said the finished version of the amendment will be brought to the board of trustees in May 2016.

Recckio said the SBRR is one of, if not the largest, pieces of legislation ever passed by SGA.

“There are many pieces of this bill that are already in place, that are already rights that we have, and are things that we do every day,” the amendment states. “We have decided to put those things into writing, as we do not take them for granted.”

According to the amendment, students have the right to dignity and respect; to shared, equitable governance and institutional participation; to institutional transparency; to an environmentally conscious campus; to academic excellence and integrity; to feel safe and be safe; to create, as well as participate in, organizations recognized by the college; and for those organizations to be funded by the SGA; among other things.

Recckio said the college’s Student Conduct Code, on which the amendment is loosely based, does not include the student body’s voice like the new amendment does. Recckio said he is hopeful the new legislation will have lasting effects on the college.