SGA reaches out to students with Meet the Senators event 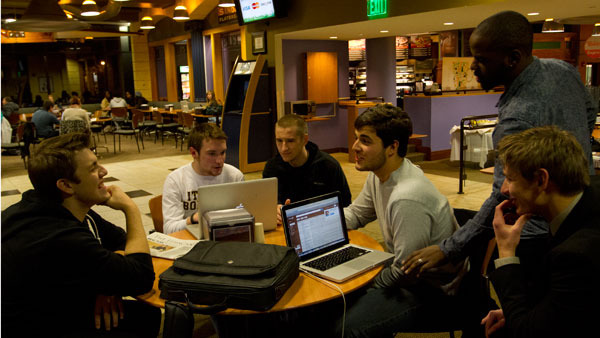 The Ithaca College Student Government Association hosted its first Meet the Senators event on Nov. 21 in IC Square in the Campus Center. The event informed students of the initiatives the SGA is currently involved in and allowed students and senators to have an opportunity to talk to one another face-to-face.

After the event began at 5:30 p.m., sophomore Dominick Recckio, vice president of communications, addressed everyone present in IC Square. Then, he called up specific senators to talk about the initiatives they are working on.

Junior Josh Couce, Class of 2015 senator, spoke about his work with the Towers Club Lounge and bringing soft-serve ice cream to dining halls, and sophomore Kyle James, senator-at-large, discussed his recent recommendation for the creation of an LGBTQ studies minor.

After several senators had a chance to speak, students were invited to come talk to the SGA members as the senators dispersed throughout IC Square to approach students. The conversations between senators and their constituents brought out a range of student interests, from frustrations with registration to campus concerts to rumors of the “Ithacat,” a stray cat on campus, being captured.

Recckio said he hoped this event would bring new ideas to the SGA directly from students.

“If we get some new ideas from students who don’t know what SGA does yet, but kind of learn along the process what SGA does, that’d be great,” Recckio said.

The initial outreach goal for the event was for senators to talk directly to at least 60 students who consciously came to the event, Recckio said. However, Recckio estimated that while there were about 60 students already in IC Square, only about 35 direct conversations were initiated.

While the SGA’s goal was not reached, students present at the event had a positive response. Freshmen Christopher Hauser and Felicya Schwarzman spoke to their representative, freshman Claire Noonen, the School of Music senator.

“We were trying to talk about things we would change about the music school. [We want] to get the building to stay open later for those late-night practice sessions,” Hauser said.

“We should get a café put in the music school,” Schwarzman said.

Schwarzman said she is also interested in having compost bins for residence halls.

Freshman Josh Enderle spoke with Couce about the decision to close the TC Lounge.

“As long as there’s somewhere else to put the activities, that’s good enough for me,” Enderle said. “That’s definitely a happening topic … so, it was really nice to get a view from someone that is actually a part of that and seeing what they’re doing now, since I just didn’t have any part with that.”

While Enderle came to the event after seeing a notice about it in his residence hall, many students, like Hauser and Schwarzman, didn’t come on purpose; they just happened to be there.

“I think there should have been more publicity … I came here by accident,” Schwarzman said.

Enderle said he wished the event had been bigger and that he had more time to speak with individual senators.

While disappointed with the turnout, Recckio said the event was still valuable and a learning experience for senators.

“We made the most out of what we had,” Recckio said. “I think [the senators] realized partly how hard it is to do good outreach. But, I also think they got out of it the fact that people do care about things on this campus that have to do with campus culture.”

Recckio said the SGA might hold future events that focus around a specific issue that a senator is working on at the time, which would hopefully draw a larger audience.

Freshman Drew Olkowski, Class of 2017 senator, said he valued the opportunity to hear directly from students.

“Overall, I think that there were some opinions and some ideas that I would probably not have gotten that I heard today,” Olkowski said. “Which, I think was the point of the event, so I think that was pretty successful.”