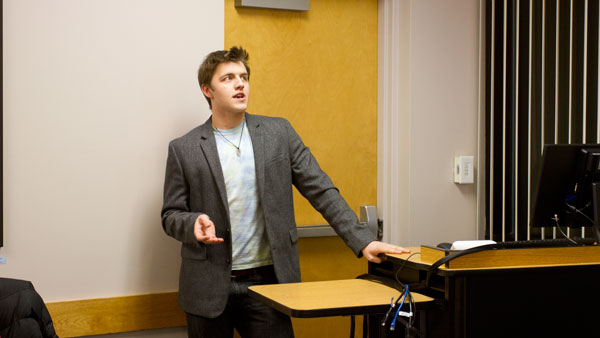 Researching electronic cigarettes to create a sensible e-cigarette policy for Ithaca College is now an initiative that the Student Government Association will be leading.

Drew Olkowski, former Class of 2017 senator, presented his “e-cigarette policy proposal” bill at the Feb. 3 meeting, and it passed unanimously through the senate. Co-sponsors to Olkowski’s bill included the Residence Hall Association; sophomore Marlowe Padilla, RHA vice-president  and RHA representative on the SGA executive board; and junior Neal Anderson, Class of 2015 senator and vice president of the RHA.

E-cigarettes differ from conventional cigarettes in that they give users a dose of nicotine without carcinogenic additives, and they also emit water vapor rather than harmful smoke. The college currently does not have a policy for e-cigarettes, so users can smoke them wherever and whenever they want on campus, including indoors.

Addicott said e-cigarettes are an issue of public health, and allowing their use in classrooms is the equivalent to allowing alcohol consumption in the classroom.

“A high is any kind of sensation that’s produced by a drug,” he said. “Nicotine is a stimulant, so you’re still experiencing a high. If you’re going to let students smoke nicotine in the classroom, you should let people who are 21 drink a beer. Basically … we’re condoning the use of drugs on campus.”

Addicott also said that e-cigarettes are different from pills and patches because the water vapor is being expelled into the external environment and therefore has the potential to affect more than one person. Addicott said the implications of e-cigarettes on bystanders are not yet fully understood.

“There’s flavoring you can put in them to make them taste differently, and some people might have allergies to that,” he said.

Olkowski said he and his committee plan to do extensive research on the benefits and drawbacks of e-cigarettes, as well as gather opinions from the campus community — including smokers, non-smokers and faculty — to better understand how e-cigarettes are being perceived and the issues people may have with them.

The committee has made no official decisions yet and is still in the research phase. However, a post on the group’s Facebook page said the SGA was leaning toward proposing a ban on the use of e-cigarettes in indoor public spaces such as classrooms, the library and dining halls.

Olkowski decided to collaborate heavily with the RHA to create this policy so a decision could be made on whether or not to allow e-cigarette use inside residential buildings.

Anderson said it’s important to have conversations with students to gauge the appropriateness of private e-cigarette use in residential rooms.

“It’s something that RHA should know about because we’re really trying to improve the residence hall environment,” Anderson said. “If there are other residents that have a problem with it, we need to know that because, right now, it seems like it’s a good idea to just have residents do it in their residence hall room.”

Olkowski said developing an e-cigarette policy will help put the college ahead of most other institutions of higher education.

“It’s important to address it now because they’re so new,” Olkowski said. “Not only is it going to be great for the school because we’re proactively working on something way ahead of the game, but … maybe five years from now when … more and more people have them, we’ll have a policy already created for it.”