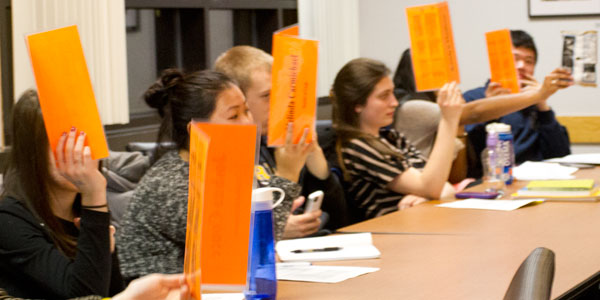 The Student Government Association unanimously passed a bill that recommends changing the Dean’s List requirements for the School of Health Sciences and Human Performances at its Jan. 27 meeting.

All schools mandate that if a student has any final grade lower than a C-, he or she is automatically barred from the Dean’s List for that semester regardless of his or her overall GPA. All schools also require that students take at least 15 credits to be eligible for the Dean’s List. With the exception of the music school, 12 of these 15 credits must be graded. The music school requires all 15 to be graded.

The bill that the SGA passed focuses on one HSHP Dean’s List stipulation that no other school has: Students who take more than four credits of student teaching, internship, fieldwork or clinical education in a semester cannot qualify for Dean’s List.

This restriction is in place despite the fact that some programs within HSHP require students to take at least six of these types of credits over their four years. This would force some HSHP students who want to remain on Dean’s List to have more than one internship, which takes longer to complete, or to do one over the summer, which costs students additional money if they want at least one credit after completing it.

Senior Greg Addicott, HSHP senator, created the bill and presented it to the SGA. He is hoping to change this restriction to more accurately reflect degree requirements.

“We shouldn’t be penalized for going above and beyond the four credit maximum,” Addicott said.

Senior Jessica Caracciolo is a speech pathology major, which places heavy emphasis on clinical education credits during students’ junior and senior years. Like Addicott, Caracciolo said the restriction is not a fair reflection of students’ hard work.

“It’s not fair to these students who are still achieving wonderful grades in their classrooms, and then they’re not going to be recognized for that,” Caracciolo said. “I think they should probably get something more than a Dean’s List certificate — they’re getting life experience, and that I think is way more important.”

Sophomore Elijah Breton, senate chair, brought this issue to Addicott’s attention over winter break. The senate chair facilitates meetings using parliamentary procedure, and he must also remain impartial. Therefore, Breton could not create the bill himself. Instead, he co-signed Addicott’s bill and had to temporarily cede his position to another SGA member while the SGA voted on Addicott’s bill.

Breton and Addicott are currently the only members of the SGA who are HSHP students. Breton said if he had remained a sport management major — which requires internship and fieldwork credits — this Dean’s List restriction may have been problematic for him. Now he is a sport studies major, which does not require fieldwork credits.

Margaret Arnold, associate dean of HSHP, said the policy has been placed on a list of items for the school to review.

“We’re constantly looking at policies, and that has now been something that we’re going to explore,” Arnold said. “I think it’s great that students, in particular a senator, is interested in talking about a policy that he finds of concern.”

Arnold did not provide specific information about how the issue will be handled. She said she did not know why that restriction to the Dean’s List is in place.

Caracciolo, who has never had a GPA below a 3.7, said making Dean’s List is important to her.

“I think it’s a nice way to be recognized for your hard work,” Caracciolo said. “It’s a pretty well-known achievement that most people would like to have. My mom has her Dean’s List certificates hung up, and now mine are getting hung up.”