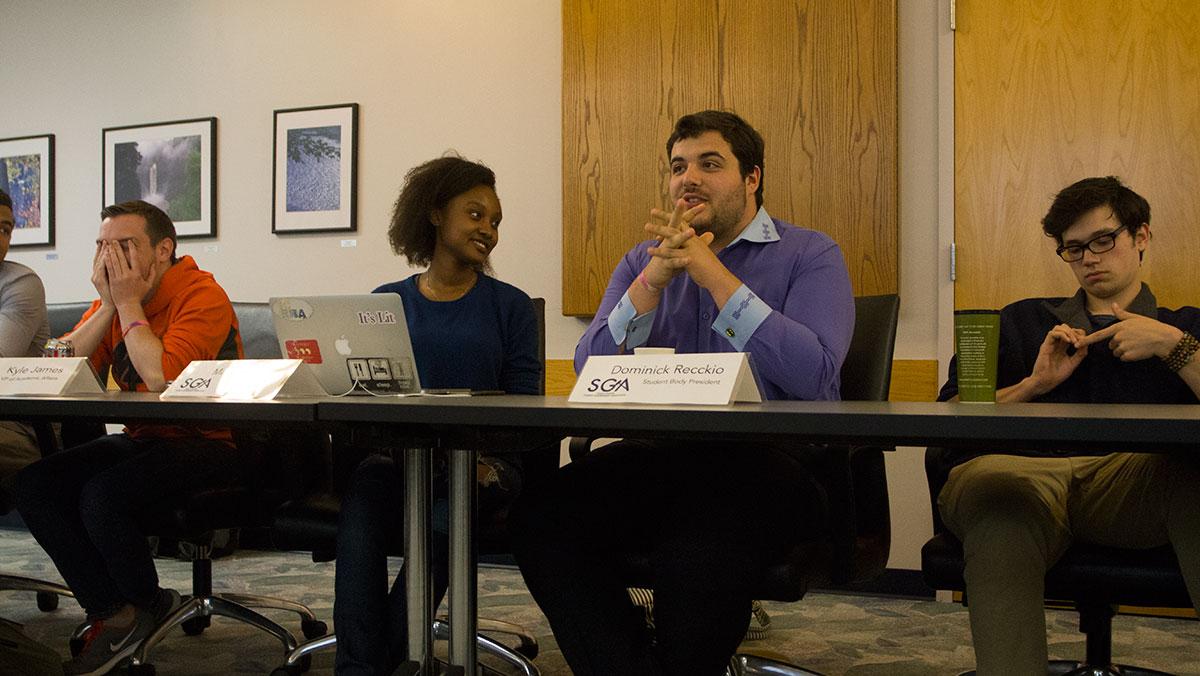 Justin Henry/The Ithacan
The SGA Executive Board struggled to reach its goal of passing 18 bills. Instead, only four will be passed by the end of this semester. Pictured from left to right is Kyle James, vice president of academic affairs, Marieme Foote, senate chair, Dominick Recckio, Student Government Association president, and Luis Torres, vice president of academic affairs.
By Justin Henry — Staff Writer
Published: April 27, 2016

An unofficial “sustainability working group” plans to propose four bills to the Student Government Association by the end of the Spring 2016 semester — a sharp decline from its original plan of 18 bills.

The working group planned to propose two bills at the April 25 SGA meeting — a “Green Budget” bill to establish a budget to support students in becoming more environmentally sustainable and a “Divestment” bill to negotiate with the Ithaca College Board of Trustees for a redirection of funds from less sustainable projects. Both bills were deferred to the next week’s meeting because the working group could not arrange a time to finish writing the bills.

Two other bills relating to environmental sustainability were previously passed at the April 18 meeting, one which formed the Committee on Environmental Betterment and one to make residential halls more sustainable. Recckio said he would rather have the time to write and propose four strong bills by the end of the semester than 18 mediocre ones.

He said the ambitious number of bills the working group planned to propose served as a method to begin a broad conversation with the campus community to make the college more environmentally friendly. Recckio said he attributed the decline in the final number of bills to his own miscalculations of how much work 18 sustainability bills required.

“Bills take a long time, and we really went into in-depth work with them, and as we were doing research, we found we should go even harder with the research, and there was more work to be done than we had previously thought,” Recckio said.

Recckio said the Committee on Environmental Betterment would be tasked to finished writing and propose the remaining 14 bills during the Fall 2016 semester.