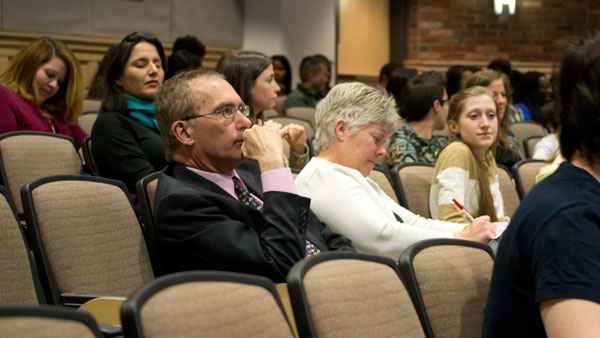 Students, faculty, staff and administration attended a presentation hosted by the Ithaca College Student Government Association about the ongoing issue of microaggressions on campus April 25 in Textor 102 — the third of its kind and the first that administrators have attended.

Simmons began the meeting with a definition of microaggressions, which he said are, “common and everyday encounters that include behaviors, jokes, actions and comments that communicate the larger narratives of marginalization and reinforce oppression, whether intended or not.”

He and senior Willa Erickson, SGA vice president of campus affairs, each shared a microaggression they had experienced at the college before opening the floor to the audience to share their own stories.

Sophomore Lisa Dupree said a visiting professor this semester discussed inappropriate words in one of her classes, and during the discussion he attempted to explain why it was OK to use the ‘n’ word. Dupree said the head instructor failed to step in and stop the uncomfortable and offensive conversation.

“I felt like I had to defend myself, my heritage and the other students of color in the class, as well as any other students who felt offended,” Dupree said. “I’ve only been here for two semesters, I’m a transfer student, and that was the first time where I felt victimized on this campus. I don’t even know if that qualifies as a microaggression, or if it could be called a micro-assault.”

Sean Themea, Class of 2016 senator, shared the story of how he was corrected by a classmate after calling a social event at a music festival ‘gay’ during his sophomore year of high school.

“I’m glad that that person stood up and got me to think about that … because sexuality shouldn’t be a synonym for something derogatory,” Themea said.

Rochon said after the presentation that having conversations about this issue is important to moving forward.

“I think talking about race and difference and how it’s experienced is one of the most important things a community can do,” Rochon said. “The whole conversation about microaggressions clarifies that people don’t always experience words the way they’re intended.”

The SGA administered a survey on April 22 asking students about their experiences with microaggressions and marginalization on campus. Simmons said via email the results are still being collected, as only 150 students have responded so far.

At the conclusion of the event, the SGA presented awards to faculty, students and student organizations that were identified from the survey as those who have played an important role in making the campus more inclusive. There were three awards: the “SGA Faculty Appreciation Award,” the “SGA Mentorship and Empowerment Award” and the “SGA Ally Award.”

Thirteen people were recognized with the faculty appreciation award, including Patricia Rodriguez, assistant professor of politics; Michael Whelan, assistant professor of communication studies; and Peyi Soyinka-Airewele, professor of politics. The 13 award recipients of the mentorship and empowerment award included Erickson; Simmons; sophomore Kyle James, senator-at-large and incoming vice president of communications; Paula Ioanide, assistant professor in the Center for the Study of Culture, Race and Ethnicity; the African Students Association; and the Asian American Alliance, among others. Rothman, Richardson and Michelle Rios-Dominguez, manager of diversity and inclusion in the Department of Human Resources, were recognized with the SGA ally award.

James, who has been working since November 2013 to create an LGBTQ studies minor, said he felt shocked to receive the mentorship and empowerment award, and that it was a sign he was moving in the right direction.

“I feel good knowing that other people see me as someone who is a mentor or that’s empowering to others,” James said. “I hope I can do a lot of good in the future; I hope I can get this minor started … I think this award gives me a check point, knowing that I [am] on the right path so far, and it now gives me kind of more drive to move forward with it.”

James has been successful in creating an LGBTQ Studies class for the Fall 2014 semester, and he said the class was full by the second day of registration.

Simmons said creating spaces such as the April 25 meeting is important for providing a shared opportunity to address microaggressions.

“It’s sad that this is the first time that student, staff, faculty and administrators have … said, ‘Let’s create this space for an honest dialogue about what’s taking place on this campus,’” Simmons said.

Rochon said the stories shared at the meeting would help lead to positive change.

“Every community is on a journey to trying to be more inclusive,” Rochon said. “Events like this one help us along on that journey. We can learn from these [stories], we can find patterns and we can develop greater sensitivity, I think, among faculty and staff.”