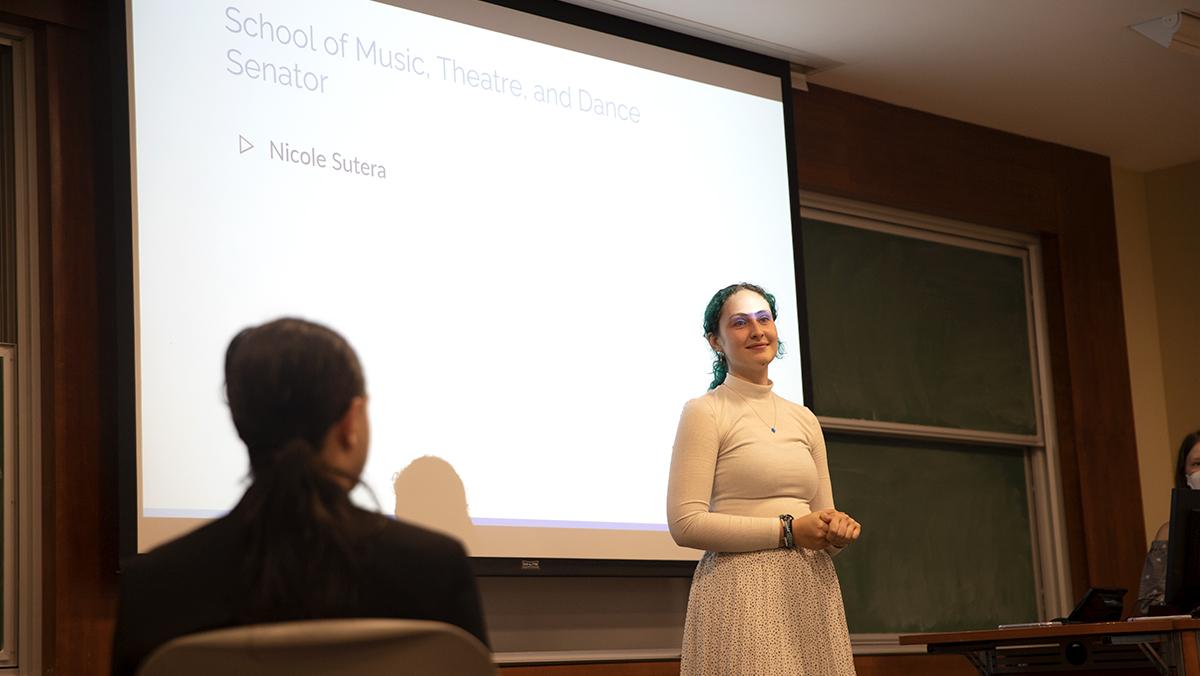 The campaign period for the SGC candidates began Sept. 9. The online voting form can be found on the front page of the IC Engage website between Sept. 14 and 16. About 20 students attended the platform presentations in Park Center for Business and Sustainable Enterprise to hear from prospective representatives for the student body.

First-year student Lili Chalfant presented her platform as the only candidate for the School of Communications senator. She said she was the senior prefect at her high school, which gave her experience in communicating with administration and advocating for students — specifically about mental health needs.

“My goal right now is just to get a general consensus of how everyone’s feeling and the big thing that they value, what they believe, before saying, ‘We want this right now,” Chalfant said.

First-year students Asata Rothblatt and Eleanor Paterson are running unopposed for the two Class of 2026 senator positions. Paterson was not able to attend the platform presentations.

Rothblatt said her main focuses as a senator would be campus sustainability, mental health and having quality food for everyone in dining halls.

“I’m excited to begin building a tightly knit community between Dillingham and Whalen students because there could be no musicals without a pit orchestra and there could be no operas without sets, lighting and crew,” Sutera said.

First-year students Rishabh Sen, Dante Conde, Caleb Cackowski and Matthew Williams are running unopposed for four out of five senator-at-large positions. One of the topics both Sen — an international student from Malaysia — and Conde spoke about was advocating for more authentic international dishes in the dining halls.

“I know we do Indian bars and Italian bars or Chinese bars, but a little bit more authenticity to that so people, international students, actually feel at home eating those foods because I definitely don’t feel that way,” Sen said.

Cackowski said that in high school he devoted much of his time to chorus. He said he was upset when he found out that his classes for his screenwriting major conflicted with participating in ensembles.

“I want to interact with the Campus Affairs Committee to represent the population of IC students who similarly want to collaborate across disciplines, whether through new or existing initiatives,” Cackowski said. “Although I see students interacting in quite a few settings outside of their schools, most events, as far as I’ve seen, don’t always mix academic pursuit.”

Williams spoke about improving accessibility on campus in terms of building features as well as spaces and clubs for neurodivergent students. He also said he wants to improve the SGC’s visibility and engagement on campus.

“This room doesn’t look like 5,000 people,” Williams said. “So, we need to have more than, I don’t know, 20 people in a room when we’re having meetings like this. So, I think visibility, people understanding the importance of SGC and people being able to get to SGC [meetings] is very important.”

Williams ended his presentation with an interpretive dance to “Diva” by Beyonce.

After the presentations, Madeya said she was extremely impressed by all of the candidate’s platforms.

“They have the passion and they are just fun people, like they’re approachable,” Madeya said. “So, I know students are going to feel comfortable talking to them about issues and I’m so excited. I couldn’t ask for better candidates.”