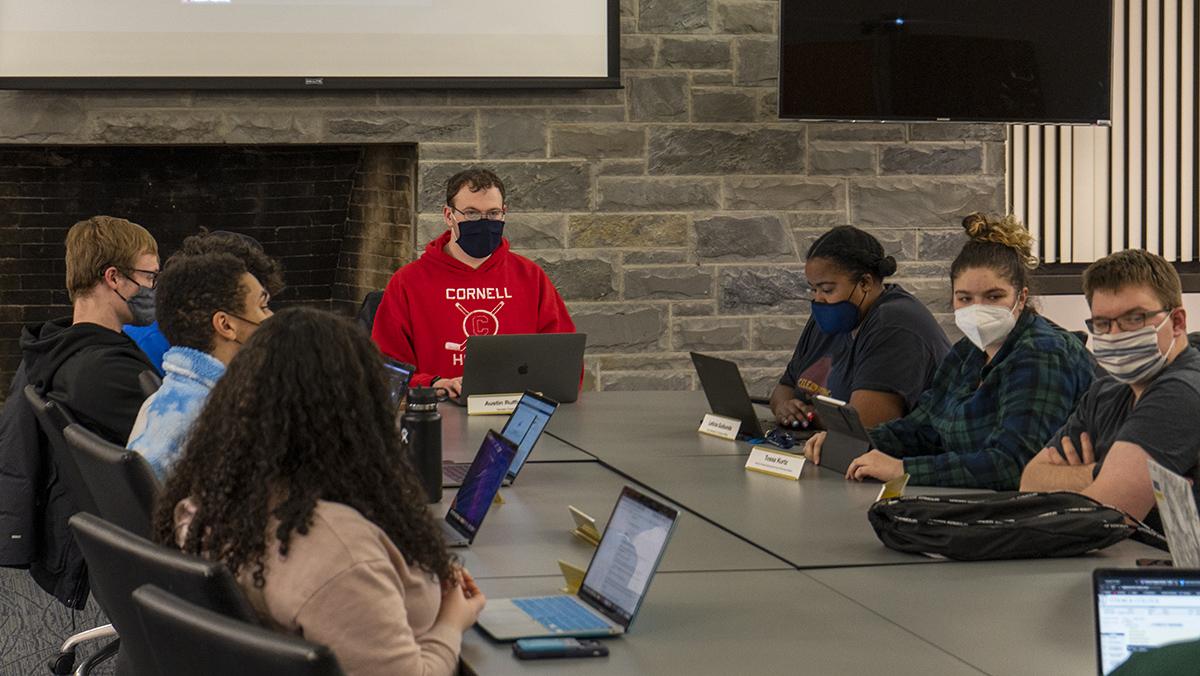 Atticus Rubottom/The Ithacan
The Student Governance Council (SGC) is in the research phase for several bills like a physical and mental health day bill, a bill that would extend library hours, a dining bill and an initiative to update the Improved Campus Lighting Bill.
By Lorien Tyne — Assistant News Editor
Published: March 2, 2022

The Student Governance Council (SGC) is in the research phase for several bills like a physical and mental health day bill, a bill that would extend library hours, a dining bill and an initiative to update the Improved Campus Lighting Bill, which the SGC passed in Fall 2021.

The SGC often makes internal committees when working on bills and areas of student concern that are open for any student to participate in. Junior senate chair Austin Ruffino said SGC members began the process of creating the Mental Health and Wellness Committee in Fall 2019. Junior Tessa Kurtz, senator for the School of Health Sciences and Human Performance, is one of the SGC members currently on the committee. The committee’s first meeting was Feb. 25 and it plans to meet with the Center for Counseling and Psychiatric Services (CAPS) soon. Freshman Noah Richardson, Class of 2025 senator, brought up his idea to propose a bill for a mental and physical health day to the committee but said the idea was in its very first stages.

“COVID[-19] hit and then everything got very difficult, but it finally had its first meeting,” Ruffino said. “That’s an internal SGC committee open to the public, so students can come join. We do try to make new committees for relevant topics as well, like the Social Justice and Sustainability Committee which is also new.”

Kurtz said she has also been working on a bill with other students on the SGC since Fall 2021 to have at least one gender-neutral bathroom in every academic building. There are currently no all-gender bathrooms in Phillips Hall, the Center for Natural Sciences, Friends Hall, the Hill Center, the Upper Quads, the Lower Quads and the Terraces Residence Halls.

Junior Harley Grossman, senator for the School of Humanities and Sciences, and sophomore James Zampetti, vice president of communications are in the beginning stages of a bill that Grossman said will hopefully extend the hours of Ithaca College’s library services. Zampetti said he spoke with students who work in the library and that they wanted the library to be open all day because they would like to work more hours.

“The beauty of recommendations is that you’re advocating for the student body and so you’re asking because there’s a specific need not being met,” Zampetti said. “We believe that funds should be allocated to meet that.”

Senior Letícia Guibunda, vice president of campus affairs, said she noticed at least six broken lights along the walkway from the Garden Apartments that goes past Z Lot. The council first presented the Improved Campus Lighting Bill on Dec. 6, 2021, which has since been implemented by the Office of Facilities. The bill resulted in more than 80 light fixtures being repaired or replaced on campus with mostly LED lights, which last longer and are brighter. The bill is now resolved, but the Office of Facilities committed to repairing more fixtures in Spring 2022 when the ground thaws, allowing better access to underground infrastructure. Guibunda said she plans to meet with Tim Carey, associate vice president of the Office of Facilities, to add the newly broken lights to the bill, so they can be fixed this spring or summer.

Guibunda is also one SGC member working on a bill to reevaluate the college’s meal plan options and costs. She said one part of the bill will work to expand the number of meal plan options while also taking into account affordability. She said the idea for the bill is rooted in upperclassmen concerns about being forced to chose between the unlimited meal plan, which includes unlimited meal swipes and $230 in Bomber Bucks for each semester, or the Commuter Plan, which includes five meal swipes each week and $400 in Bomber Bucks for the semester. The other part of the bill is finding a way to have more flexibility or accommodations for students with either food-related religious needs or students with dietary restrictions and allergies. All students who live in residential housing — except students living in the Garden Apartments and Circle Apartments — are required to participate in the college’s meal plan.

“It doesn’t necessarily make sense for somebody who doesn’t have access to most of the things that the dining hall offers to pay the same price as somebody who would be able to eat all of it,” Guibunda said. “We’re still fleshing that out and hopefully are going to get something done soon.”

On March 9, members of the SGC will be in the Campus Center recruiting students for SGC committees and general involvement. The SGC has seen a decrease in student engagement and currently has 17 of 25 senate positions unfilled and is still in the process of electing a president.

Zampetti said via email that SGC is the sole representative body for the college’s student community.

“SGC works with the student community to implement change on campus and improve student life,” Zampetti said via email. “SGC is always looking for student feedback, please don’t hesitate to contact us at sgc@ithaca.edu. You can also find more information about us at https://www.ithaca.edu/student-governance-council.”

Correction: This article previously stated that Tessa Kurtz began the process of creating the Mental Health and Wellness Committee in Fall 2019. However, Abigail Murtha, then-senate chair, started the committee in Fall 2019 and passed it on after graduating, to Kurtz for the 2021-22 academic year.

Correction: This article previously misidentified Harley Grossman as Lauren Hitesman, varsity athletes senator. Hitesman is not involved in writing the bill to extend library hours and was not present at the meeting.