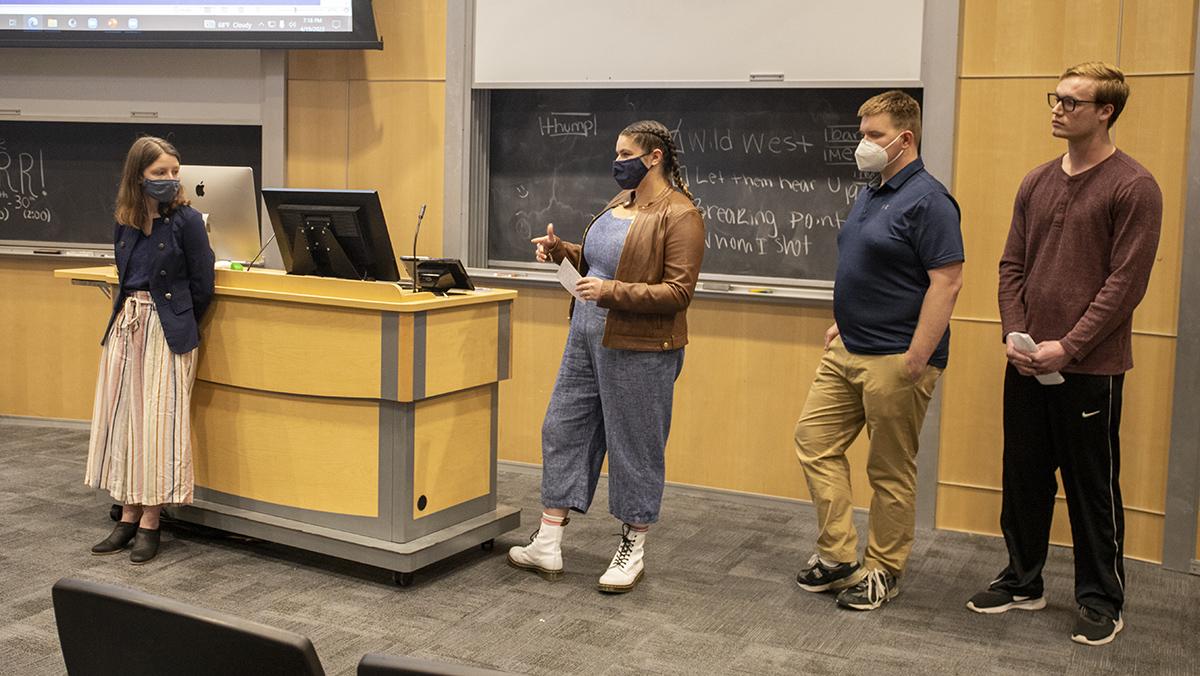 The Ithaca College Student Governance Council (SGC) held platform presentations where students running for the SGC executive board and senate for the 2022–23 academic year announced their candidacy.

About 20 people gathered in Textor 102 to hear from the candidates. Voting on IC Engage will be open April 28 and 29. One executive board, or slate, presented its platform campaign for the SGC executive board and eight students ran for SGC senate positions, although one senate candidate was not present.

“Our mission is to make Ithaca College a united campus, a united community and a united voice,” Madeya said. “I want to connect Ithaca College with the greater Ithaca community … so people actually get to know where we live and to really integrate themselves with our neighbors.”

Joshi said she wants to promote resources for students who are experiencing discrimination inside and outside of the classroom because this is a reoccurring issue that students continue to see on campus.

Kurtz said her platform focuses on accessibility and advising. She said she wants to work with Student Accessibility Services to find a way to make creating a personalized education plan easier and less stress–inducing.

The vice president of finance and business is also the chair of the appropriations committee. Powers said he wants the committee to meet with campus organizations and see what clubs really need from the SGC.

“I would really like to be able to connect with more organizations … seeing what they need, seeing if we can revise anything for appropriation so [students] know that our committee works for the student clubs and not just random procedures that we might be following for no reason,” Powers said.

Zampetti said that if elected, he will work to increase student engagement and help the student community realize the SGC is a resource to have their voices heard.

Freshmen Hannah Ahmed and Noah Richardson are running for the two Class of 2025 senator positions. Ahmed’s platform is focused on advocating for students of color and minorities on campus. Richardson was not able to attend the platform presentations.

Freshman Vincent Tavernese and sophomore Alexa Rahman are competing for the position of senator for the School of Music. Tavernese is the current senator and said he wants to continue his work with interim Dean Ivy Waltz talking about how to improve food access and mental health for students in Whalen and Dillingham. As part of the search committee for the new dean of the School of Music, Theatre and Dance, Tavernese said it is important that the prospective dean could make a vision that works for both schools and to choose someone who is an activist and advocate for diversity in music. Rahman said she wants to promote diversity, inclusion and equity in the School of Music and to make sure that students of color are represented. She said one way she will do this is by forming a diversity, inclusion and equity council to review all of the School of Music’s curriculum.

All other senate positions are running unopposed.

Junior Harley Grossman is the only candidate for the School of Humanities and Sciences senator. She is the current senator and said she wants to work on improving the widespread dissatisfaction she believes to be on campus. Part of this, she said, would be through expanding dining options.

Junior Himadri Seth is running to be reelected as the international senator and said she hopes to continue her work voicing the unique struggles international students face.

“The total international student body makes up only about 2% of the entire body in the college and so something that a lot of us very often struggle with is finding representation,” Seth said.

Junior Maya Scriven is running for one of the five available positions for senator–at–large. Scriven presented three main focuses in her platform presentation: having an American Sign Language interpreter at all campus events who are hired within the college and expanded options in the library for deaf students and to organize all campus resources, which she believes are currently too scattered and difficult to access.

Sophomore Nick Viggiani is running for reelection for the Class of 2024 senator. He said he wants to continue his efforts on the Mental Health Committee and increase student engagement. There are 25 senate positions but only eight senators currently in office.

“I think one of the biggest issues that SGC has right now … is we don’t have a ton of members,” Viggiani said. “So, it’s very hard to be a voice for your classroom if they don’t even really know you exist.”