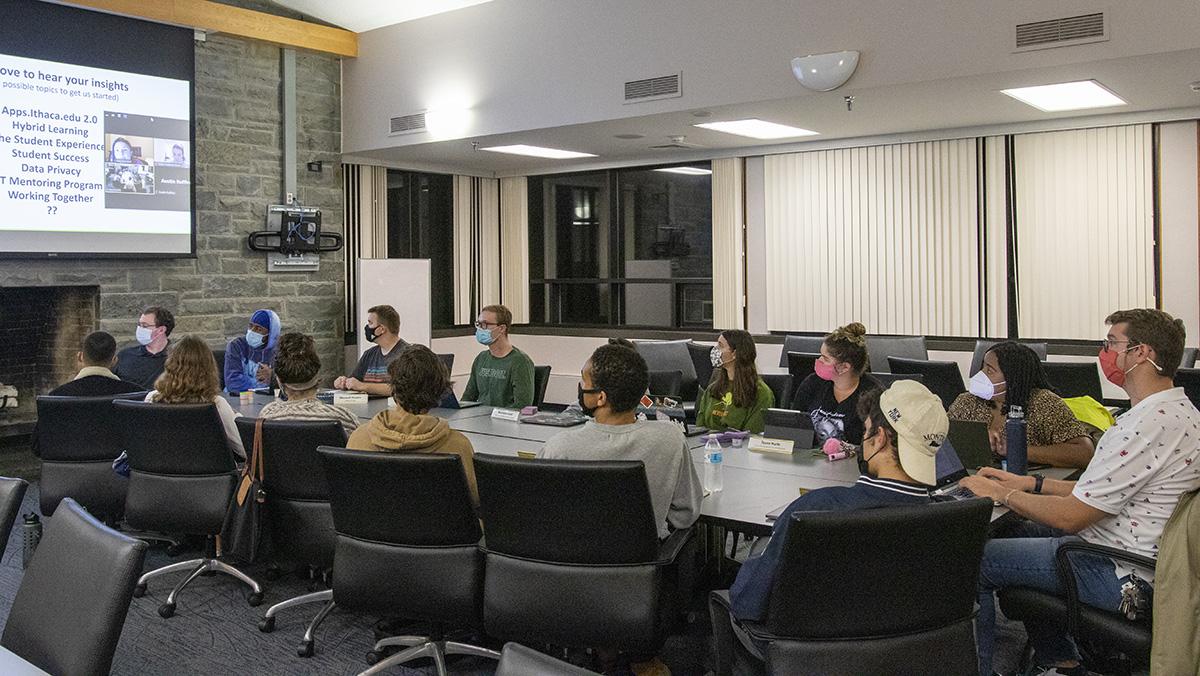 Malik Clement/The Ithacan
Weil, chief information officer of IT, said IT has eight goals for this academic year including a return to campus for IT, Canvas, outdoor wireless, residence hall wireless, the Center for Creative Technology, loaner laptops and accessing IT help.
By Mel Andia — Contributing Writer
Published: October 6, 2021

The Ithaca College Student Governance Council (SGC) met with David Weil and Casey Kendall from Ithaca College Information Technology (IT) to go over their goals for the 2021–22 school year.

Weil, chief information officer of IT, said IT has eight goals for this academic year including a return to campus for IT, Canvas, outdoor wireless, residence hall wireless, the Center for Creative Technology, loaner laptops and accessing IT help.

IT is setting up a more enhanced hybrid learning system for classes, Weil said. There is currently one hybrid learning center set up by IT in Job Hall 160. The classroom has two cameras, one that focuses on the professor and the other focusing on the class, with a screen on the side to show the students tuning in via Zoom. Weil said he hopes to have 12 spaces like this set up on campus by the end of October.

IT is holding workshops to teach faculty Canvas as well as working towards streamlining the platforms from professor to professor, Weil said. He highlighted Canvas support and the Canvas Student app.

“We added 24/7 support, so if you’re using it [and] you run into a problem, or your professor runs into a problem, you can chat, call, or email support 24 hours a day, seven days a week,” Weil said.

Members of the student body worked with IT last year to choose a new learning management system to replace Sakai, including members of the SGC executive board members junior Senate Chair Austin Ruffino and junior SGC President Déontae Guy.

Kendall, the executive director of applications and infrastructure of IT, spoke to the SGC about IT’s goals of increasing wireless access outdoors through installing outdoor access points. She said IT is currently focused on the quad between the Campus Center and the Athletics and Events Center.

Weil said IT has worked to improve wireless access by the Dillingham Fountains and is working on improving wireless access in the quads in residential areas in the future.

IT is working towards running–up the underground wireless cabling to all the residence halls, Kendall said. IT has put down over 55 miles of cable over the past few years.

“A couple weeks ago, Hillard had a fiber break,” Kendall said,  “and there wasn’t a way to reroute to pick another path to bring that building back up. So we had to use some creativity and get an alternative [fix], but it’s not a permanent fix, where if we have better underground then we have a more permanent fix.”

Weil also mentioned the loaner laptop program available to students, which allows students to check out laptops for up to a week.

Weil and Kendall spoke to SGC about the availability of IT support for students and faculty. The IT service desk in Job provides support for a variety of IT issues and the Ithaca College website also provides a page for real time system status updates.

Sophomore James Zampetti, vice president of communications for the SGC, said he and Kendall are working together on developing an Ithaca College app.

“Essentially this would be an app that would kind of just centralize a lot of aspects of campus life, a lot of [what is already on] apps.ithaca.edu specifically, [like] the campus map, reloading your Bomber Bucks, etc,” Zampetti said.

Kendall said that while the app is being thought out and that due to the projects IT is working on in the next few months, IT is not able to get the app up and running at the moment.

Kendall and Zampetti are currently focusing on redesigning apps.ithaca.edu.

Guy spoke about his hope for a growing relationship between SGC and IT.

“[SGC is fortunate] enough to just say, ‘Hey, how can we help you?’ and kind of what you can do for us as well,” Guy said. “So I’d really love for our relationship to strengthen over as time goes on throughout the semester.”

Editor’s note: A previous version of this article stated that over 55 miles of cable was put down during the 2020–21 academic year. It was put down over the past few years. The article also said that wireless access was being improved by the Dillingham Fountains. It has already been improved.