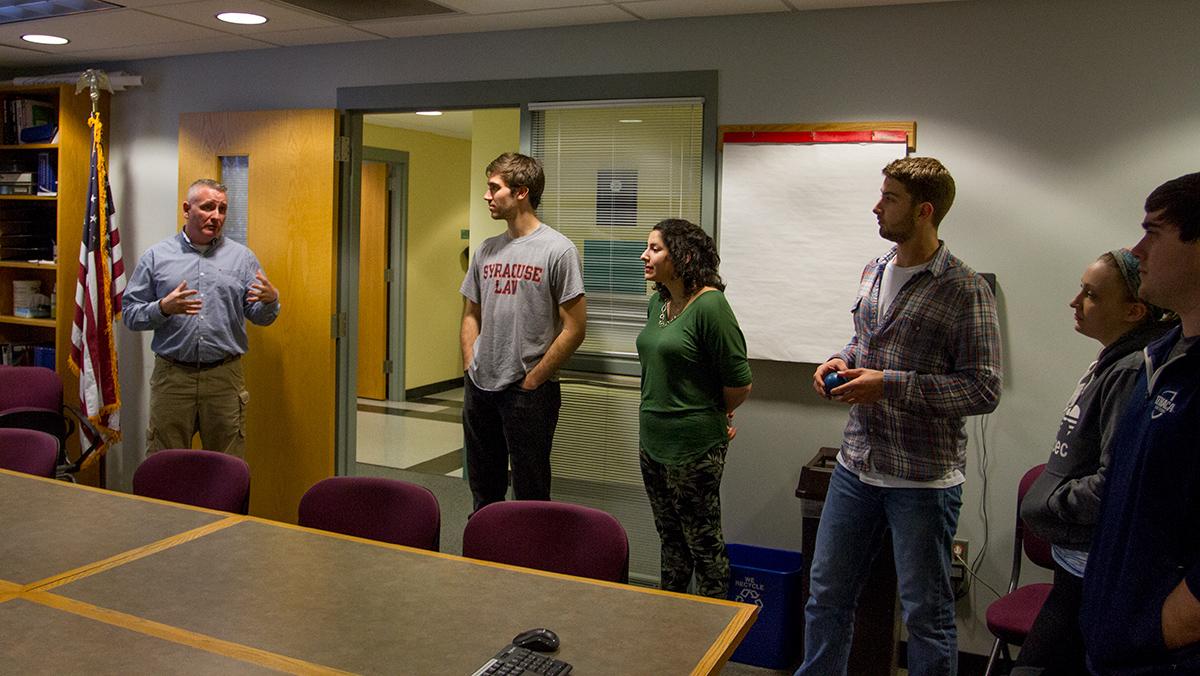 During its final meeting before spring break, on March 6, Ithaca College’s Student Governance Council passed a bill aimed at simplifying the Integrative Core Curriculum into just four themes and considered another bill that would recommend moving certain books from the Ithaca College Library.

The ICC Theme Consolidation Bill, which passed 13 to 1 with three abstaining, was sponsored by Transfer Sen. Jessica Gallagher, International Sen. Isabella Grullón Paz and Emily Honen, School of Humanities and Sciences senator. It was co–sponsored by Vincent DeTuri, director of the Integrative Core Curriculum, and Conor Friend, Class of 2018 senator.

The bill proposes merging some ICC themes to make more ICC classes available to students in their chosen theme. The bill specifically suggests merging A World of Systems and Inquiry, Imagination and Innovation into one theme, as well as  The Quest for a Sustainable Future and Power and Justice into another theme, leaving four themes in the ICC.

Honen will bring these recommendations to the Faculty Council’s recently formed ICC Advisory Committee, of which she is a member. She said the decision about which themes, if any, merge will ultimately be at the discretion of the subcommittee. The bill states that if the subcommittee needs assistance in doing this, the SGC will form an ad hoc committee of students and faculty members to sort out the details.

“[We were] trying to figure out an easy way and a short–term way to get more classes available to students who [didn’t have] a lot of perspectives available in their themes,” Honen said.

The idea for the bill came from a meeting the sponsors had with DeTuri several weeks ago to explore concerns that some students had about fulfilling ICC requirements while studying abroad. Grullón Paz said they ultimately concluded, during the meeting, that there were no major flaws in the process for getting ICC approval for courses abroad.

The conversation at the meeting shifted to merging ICC themes, which was something DeTuri suggested. DeTuri said he felt that having student input was needed to make the ICC better.

“That’s a suggestion I had looking at some of the data, but it cannot be up to me,” DeTuri said. “It cannot be my decision. I am glad that it originated from here with SGC and it was proposed by students.”

In addition to the ICC Theme Consolidation Bill, the SGC also considered the Kane Initiative Bill, which was sponsored by Senator-at-Large Charlie Kane and co–sponsored by sophomore James Dymowski, a student who is not a senator but whom Kane paid to help write the bill.

The bill recommends that the library remove books on the south side of the fourth floor from shelves P1 East to P15 West, a section of the library the bill claims contains outdated and unused books, to make more room for students to study.

Ultimately, the bill was tabled 10 to 4, with four abstaining — meaning it was set aside for a later date.

During discussion, some senators expressed concerns that there had not been enough research into the proposal. Kane conducted an online survey of 81 students and concluded that nearly 85 percent of students surveyed primarily use the library for studying purposes. Less than 10 percent of students surveyed said they mainly used the library to take out books. But some senators said there was not enough data on the professors and students who rely on those specific books.

The bill cited several colleges and universities across the country that have adopted a book-free library. One of the schools mentioned was Florida Polytechnic University, which relies on an online database of material for students to use instead of physical books. Vice Provost Katherine Miller said that there has been a mixed reaction to this policy.

“There are people that like it a lot and are appreciative that they have access to materials that they need 24/7,” she said, referring to the university’s online database. “I do have people that miss the books.”

Other senators said there was not enough communication with the library staff and that it is uncertain whether or not those books referenced in the bill were really nonessential.

School of Business Sen. Taulant Gashi said he was concerned about how the bill would impact the library’s interlibrary loan program. All of these concerns led to the SGC’s tabling it.

Though his bill was tabled, Kane said he plans to meet with librarians, revise the bill with other senators and present it again in the future. He said that in a future bill, he may present the SGC with a specific list of books and book volumes that he wants to be considered for removal.

“Evident by the fact that most people didn’t know what these books [were] or what was in this section of the library, I’d have to imagine that it holds true that no one has looked at these books before,” he said. “I’m going to speak [with] as many faculty as I can about this. … I hope we can find maybe even a new avenue to address this issue of spacing.”