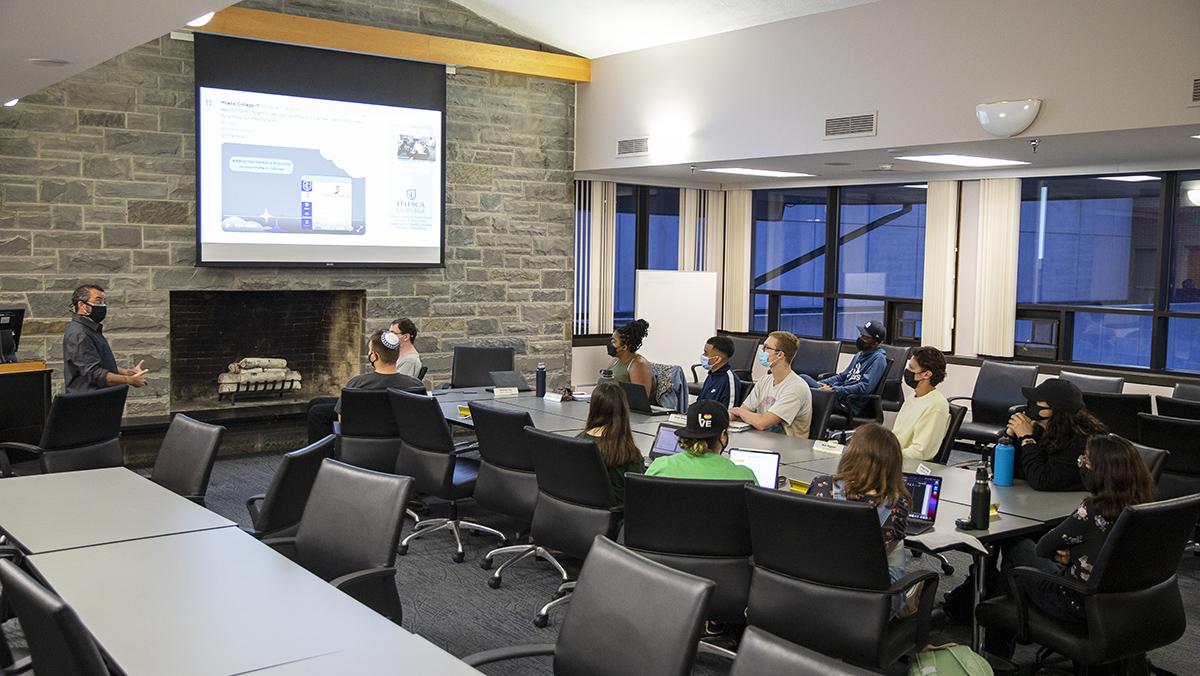 Nolan Saunders/The Ithacan
The SGC met with Luca Maurer, director of the Center for LGBT Education, Outreach and Services, who went over the resources on campus for LGBT+ students at its Sept. 13 meeting.
By Mel Andia — Contributing Writer
Published: September 15, 2021

The Ithaca College Student Governance Council (SGC) passed its first bill of the semester — the Employee Vaccination Bill — and met with Luca Maurer, director of the Center for LGBT Education, Outreach and Services, who went over the resources on campus for LGBT+ students at its Sept. 13 meeting.

The SGC passed the Employee Vaccination Bill with a vote of 5–1 with no abstentions. While all students are required to be vaccinated against COVID-19 for the fall semester, employees are currently not required to be, instead having to turn in proof of a negative COVID test. The bill recommends that the college make it a requirement that employees be vaccinated.

Weiser gave a brief overview of the bill, explaining how the lack of vaccinated employees poses a safety risk to the campus community.

“A fifth of current IC employees are still unvaccinated,” Weiser said. “We only have an 80% vaccination rate [for employees]. Basically, our resolution is that we want to require employee vaccinations.”

Weiser said much of the support for the bill comes from students who feel uncomfortable with there being such a high rate of non-vaccination among employees.

Madeya said she has had students reach out to her with similar concerns.

“I just see a lot of urgency with this bill from the standpoint that I have many classmates tell me that they are uncomfortable in the classroom because of this,” Madeya said. “And especially because we don’t have a hybrid option, it adds an extra [discomfort] to this.”

Sophomore Nick Viggiani, Class of 2024 senator, said he acknowledges that this is a student issue, but he also said the bill qualifies as an employee issue.

“I have no issue with recommending a mandate, I just think we should talk to faculty [about the recommendation],” Viggiani said.

Junior Soumyaa Joshi, School of Humanities and Sciences senator, said the bill is a recommendation to the college.

“We’re not forcing anyone to do this,” Joshi said. “We are student representatives, we are making this statement on behalf of students. We are presenting that … whether or not they accept that is not our problem. We are advocating on behalf of the students.”

After an extended discussion, the SGC passed the bill.

The SGC also met with Maurer to go over the resources on campus for LGBTQ students, both in the center itself and beyond. The LGBT Center is now located in Towers Concourse, Suite 110 with an upcoming open house in the first week of October. The center offers training workshops on a variety of LGBT issues, referrals for LGBTQ concerns and campus-wide LGBTQ-themed education programs and social events.

Maurer highlighted independent, student-run LGBTQ clubs, the two largest being Spectrum and Prism. He also told the SGC about an upcoming third club for queer students of faith to discuss issues that intersect with their various identities.

“My goal, personally and professionally, for the LGBTQ Center … is that this institution has everything in place so that LGBTQ students can do what they want and need to do, and never have to think about processes or practices or policies,” Maurer said. “That they can just be IC students much like some heterosexual-cisgender students [and] don’t have to think … about their sexual or gender identity, they just get to be students. What I want is for all of our students to be able to do that.”