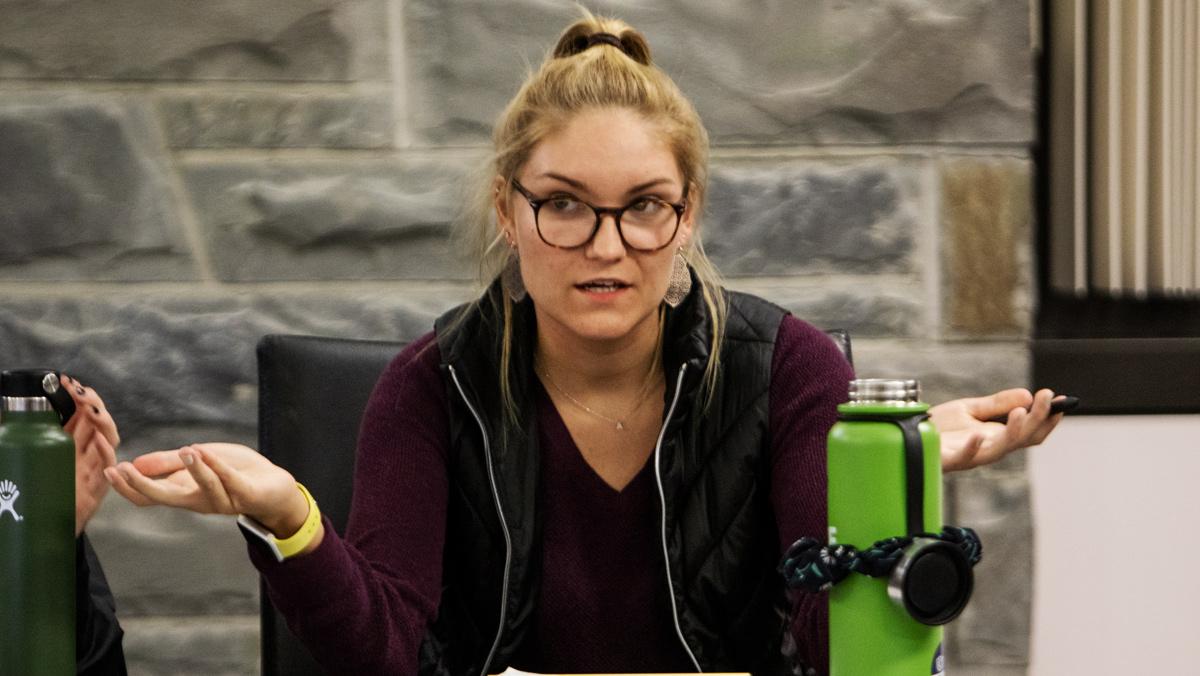 Kristen Harrison/The Ithacan
Junior Allison Kelley, vice president of business and finance for the SGC, said all the magazines were given opportunities to voice their opinions at multiple meetings the SGC Appropriations Committee held.
By Ryan Bieber — Staff Writer
Published: February 26, 2020

A bill passed in Fall 2019 by the Ithaca College Student Governance Council (SGC) that limits the number of copies on-campus publications can print has impacted student publications differently.

The bill, titled the Magazine Sustainability Amendment, was passed Dec. 9, 2019. It amended the SGC Allocations Handbook to state that the SGC will only fund the printing of 500 copies of on-campus magazines per issue and a maximum of 1,500 copies per semester. Previously, publications were allowed to print as many copies as they wanted. The bill also provides funding for the publications’ websites, funding that was not offered before the bill. If publications receive website funding, they can only print 750 copies per semester. This bill was passed in an effort to increase sustainability and limit excessive paper use.

The publications affected by the bill are Buzzsaw Magazine, Passion Project, Embrace and Distinct because they are directly funded by the SGC.

Senior Mateo Flores, Ministry of Cool co-editor of Buzzsaw Magazine, said the bill has a larger effect on primarily print-based publications like Buzzsaw. Buzzsaw also has a website.

Flores said the changes have created problems for the magazine and delayed printing.

“When Puberty, our first issue of last semester was ready to print, we didn’t have the funds to request our typical operational budget, which is the printing for three issues,” he said. “We had Puberty sitting on our computers for a while because we were stalled until the bill was approved.”

Buzzsaw could only print two issues in Fall 2019, as opposed to the usual three issues as a result of the delay. Flores said that he wished Buzzsaw had more conversations with the SGC before the bill was passed.

“It wasn’t really a discussion of how we could work together or how us as publications and the SGC could think of alternative ways to encourage a less wasteful approach,” he said. “If anything, it felt like a rushed solution to a very palpable problem.”

Junior Allison Kelley, vice president of business and finance for the SGC, said all the magazines were given opportunities to voice their opinions at multiple meetings the SGC Appropriations Committee held. She said that there were no issues during the second meeting held by the Appropriations Committee with representatives from the on-campus publications when the bill was being drafted and that people only raised questions when the bill was passed at the senate meeting.

Junior Noa Covell, web designer for Passion Project, said that because Passion Project is primarily a web-based publication, the changes to the Allocations Handbook are helpful.

“Having that reassurances that SGC cares and can fund our websites is really nice to hear,” Covell said.

Passion Project prints its magazine once a semester. This semester, it plans to print 300 copies. In Spring 2019, it printed 500 copies, Covell said.

This semester, Buzzsaw already requested 500 copies for its first issue, Clue, and plans to request the maximum number of 1,500 copies for the rest of Spring 2020. In Spring 2019, it printed 2,400 copies, Flores said.

Kelley said the SGC spent many hours deliberating what the cutoff number should be, but it can be changed.

Flores said that while he likes the idea of increasing sustainability, he thinks that switching to a more web-based publication is not right for Buzzsaw.

“We have considered ourselves a printed publication for 20 years, so we don’t technically want to go completely online,” he said. “I think our printed issues are part of what gives us our distinct look.”

Kelley said the goal of the bill was not to favor online magazines over print magazines.

“Our intention was sustainability, and, if that negatively affects one group, and praises another then it’s how the cards fall, but that was not our intention,” she said.

Covell said she thinks even though there are problems, all the magazines simply want to continue publishing content.

“I think everyone ultimately wants to achieve the same thing of getting their content out there and making the campus community more aware of what their peers and classmates are writing,” she said. “It’s a two–way street between SGC and the publications, and I think there has to be effort put in on both ends.”