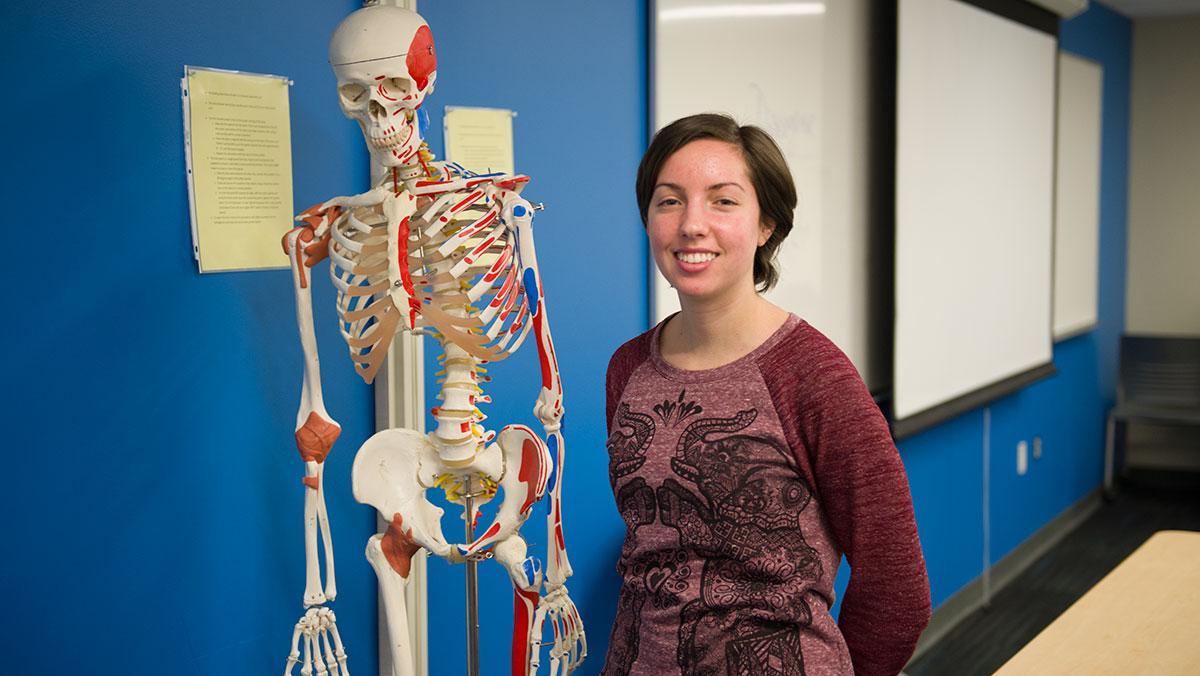 Tommy Battistelli/The Ithacan
Lena Sargenti is the only sophomore in the health and physical education teaching major at Ithaca College. She was recently awarded the Ruth Abernathy Presidential Scholarship from the Society of Health and Physical Educators America.
By Ana Borruto — Staff Writer
Published: March 20, 2016

Lena Sargenti keeps herself busy as Ithaca College’s sole sophomore health and physical education teaching major. She gives up some of her time on Saturdays for her teaching assistant sessions with students, where she goes over topics like anatomy. She creates raps about the muscles in the forearm and makes up acronyms and tricks to remember the nerves throughout the body.

“The first practical, I studied everything online, and I only got a B. I went to other TAs, and I came here with Lena one time, and I learned everything,” Rorick said. “I only come once a week, and she is probably the reason why I got an A on the last practical.”

Sargenti was recently one of five recipients awarded the Ruth Abernathy Presidential Scholarship from the Society of Health and Physical Educators America, an organization committed to promoting healthy living for children through health and physical education programs. According to SHAPE America, the selection qualifications for the scholarship include “scholastic proficiency, evidence of leadership, school, community, professional activity/service, and character attributes.” Sargenti said she believed she had the qualifications for the scholarship and applied for it herself. The scholarship honors students in the health, physical education, dance or recreation fields at a national convention in April in Minnesota.

“It just shows all of the hard work I’ve been putting into it — into this and my college career — it’s just going to pay off,” Sargenti said.

Sargenti said that at first, she wasn’t going to be able to attend the conference due to money and scheduling issues, but the Department of Health Promotion and Physical Education recently agreed to fund the trip so she can attend and accept her award.

Sargenti said even though the program she is in is small, she is grateful for the relationships she has created with those within the department.

Thomas Swensen, professor and chair of the Department of Exercise and Sport Sciences, had Sargenti as a student last year and now as a teaching assistant. He said she is inventive and is suited for her field of choice.

“You have this person who is studying to be a teacher, and she’s already thinking about teaching things,” Swensen said. “She has a lot of energy, a lot of passion, and she’s very mature.”

In addition to her Saturday TA sessions, Sargenti holds meetings every Tuesday with the other students in her major. They discuss how to welcome others to the health and physical education teaching major and what kind of events they should hold.

Maddy Horowitz, a freshman health and physical education teaching major, said she attends the meetings on Tuesdays to keep up with what is going on and stay connected to those in her major.

“As freshmen, it was really important to have people to connect with because we know how small the major is at Ithaca in general, and the freshmen being the biggest class, we still didn’t really know how to orient ourselves,” Horowitz said. “It was good to have the upperclassmen around, even if it’s one or two at a meeting.”

Sargenti, who is one of only 18 underclassmen in the major, said she wishes there had been more support for her when she was a freshman and felt like she had no one who would take her under their wing, so she created the Health Promotion and Physical Education Majors Club for health and physical education majors to build a stronger community.

“The reason I wanted to start the club was so that I could reach out to the freshmen and say, ‘I’m here for you. I’m all about supporting and providing help wherever you need me,’” Sargenti said.

She said she wishes there were more people in the program; however, she appreciates the one-on-one attention and relationships she has built with others in the department.

Sargenti said she was influenced early in her life by a karate teacher who offered her the support she now tries to give to other students. She currently holds a first-degree black belt, and although she hasn’t been active in karate for a few years, she credits the sport and her teacher with getting her where she is today.

“When I started karate, the only reason that I stayed was because of one teacher who was my rock,” Sargenti said. “He really motivated me to not give up, to keep going and work hard. My love of karate transferred into me wanting to teach and me landing in the health and phys-ed field.”

Sargenti said health and physical education is more than just exercising and eating right. It embodies communication, emotional health, spiritual health and more. She said that in the future, she would like to be a health and fitness “guru.” She wants to teach children and adolescents. She’s interested in teaching karate, learning massage therapy and working in a wellness center.

“I just believe that’s it’s super important, and as a side effect, it’s fun,” Sargenti said. “More importantly, I enjoy it so much, and I know I can inspire others to enjoy it because they will see me and be like, ‘She’s really cool, she’s having fun, she’s a good teacher,’ or, ‘She’s a good role model, she’s going to inspire me to do whatever it is.’ I think that the goal is to make a difference in one child’s life.”