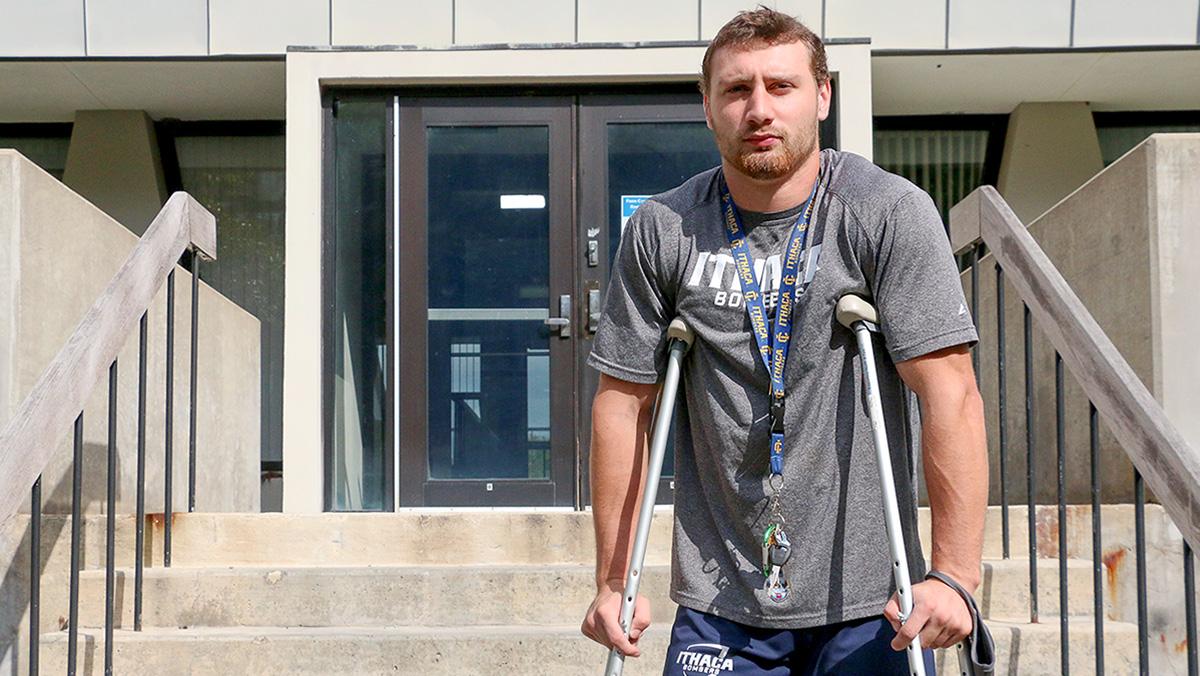 Abby Brady/The Ithacan
Senior Kevin Schoch, a member of the football team, suffered a non-contact injury during a game Sept. 11. He said he may have torn his ACL and will potentially be on crutches for the remainder of the fall semester. Some students have experienced issues regarding a lack of accessibility.
By Jillian Bleier — Assistant News Editor
Published: September 23, 2021

Junior Cali Trainor said she wishes she had thought more about accessibility when choosing which college to attend. She has a dynamic mobility disability and the extent to which she struggles to get around Ithaca College’s campus will vary from day-to-day.

She said she thinks accessibility on campus could be improved, especially in some of the older buildings.

“It is so disjointed,” she said. “I know certain buildings were put up after other buildings and all that, but really with a lot of the buildings, it just feels like they were put up and then it was like, ‘Oh this isn’t up to code so let’s just add an elevator here and add a ramp here,’ and like ‘everyone else will just figure it out if they need to.’”

While some students have complained about the lack of accessibility on campus, the college does have several features in place to aid students who may have a physical disability or who may have a temporary injury that impacts their mobility.

There are elevators installed in every academic and administrative building, Tim Carey, associate vice president for the Office of Facilities, said via email. A few residential halls have elevators installed, including Boothroyd, East Tower and West Tower, and there are ramps in different locations across campus to make travel easier. There is also an accessibility layer on the online campus map that will show individuals the wheelchair-accessible entrances on campus, Ian Moore, manager of Student Accessibility Services (SAS), said. However, the topography of the campus, located on the slope of South Hill, in New York, makes it hard for the campus to be completely accessible and have efficient pathways without needing stairs, Moore said

Moore said about 22% of students are currently registered with SAS for some type of accommodation, including but not limited to academic testing, note-taking, physical disabilities, accessible media, dietary, housing and emotional support accommodations. He said this number has been steadily increasing from 10% over the past seven or eight years.

He said the office works hard to accommodate all students, but the nature of the campus creates more of an inclusive design issue rather than an accommodation issue.

“To need a disability services office is to acknowledge that we do not live in a perfectly inclusive environment, that our world and our society is not 100% inclusive of individuals with disabilities,” Moore said.

He said he thinks it is important to note that not every student with a disability is registered with the office, and accommodations are individualized and refinable.

“The one thing that I always tell people is that we may have accessibility in our title … but accessibility is sort of everyone’s responsibility,” he said. “We all help define the environments that the Ithaca community provides, from speaking events to clubs to things that happen in the dining areas … everyone helps define access on campus.”

Senior Megan Handley said she has Crohn’s disease and struggles with chronic fatigue and mobility issues. She said the campus is as accessible as students make it, adding that she thinks SAS is a great resource, but that it seems like accessibility was an afterthought when the campus was being built.

“The way that the school is laid out geographically just does not lend itself to accessibility,” she said. “The school should work harder to make sure that students are able to get around, because they are, but they’re very back-alley ways of getting around.”

Handley, a tour guide on the President’s Host Committee, said she feels the school is commonly advertised as being very accessible, but the accessible pathways feel more like taking a backroad instead of a highway. She said she thinks the accessibility pathways, like having to almost enter the kitchen at Terrace Dining Hall in order to take the elevator instead of the stairs, are not very clear to students.

“Students can feel awkward going back there or feel singled out, and that’s just like not the point of what accessibility is,” she said.

Carey said via email that several efforts have taken place over the past few years to improve accessibility on campus, including the addition of an elevator in Friends Hall, 26 new Americans with Disabilities Act (ADA) compliant bathrooms in East and West Towers and an increase in the number of accessible parking spots on campus.

“Accessibility is a driving factor in how renovations and projects are designed and implemented,” he said via email. “The college always takes these opportunities to improve upon accessibility.”

Senior Kevin Schoch, a member of the football team, said he was playing in a game against the College at Brockport on Sept. 11 in Brockport, New York, when his knee buckled, and he suffered a non-contact injury. He said that he is currently on crutches and that he believes he tore his ACL but has not gotten an official diagnosis. Schoch said if he did tear his ACL, he may be on crutches for the remainder of the fall semester.

Schoch said he feels getting around campus is easier now that he has a car with a handicap parking pass compared to when he previously tore his MCL during Fall 2019, but getting around still takes more time on his crutches.

“If you’re not, you know, disabled in some way you would never, like, it would never cross your mind, but now … it does make everything just significantly more difficult,” he said.

In an Inside Higher Ed article from 2017, a student who used a wheelchair discussed the difficulties surrounding applying to colleges as a student with a disability. The student, Valerie Piro, said in the article that she felt left out when seeing how difficult it was to access certain necessities like elevators in academic buildings.

“Besides, the lack of concern for my needs made me feel unwelcome,” she said in the article. “Physical space and a well-functioning infrastructure on a campus cannot be overlooked, especially when one has a disability.”

In 2016, about 20% of undergraduate students reported having a physical disability. Students from other colleges have also voiced their concerns over accessibility on campuses even 30 years after the passing of the ADA, according to NBC News. Ithaca College is compliant with the ADA and offers support and equal opportunity to students with disabilities. The college’s policy manual says that students can bring accessibility concerns to the Director of Benefits Compliance.

Freshman Ava Palfreyman, a member of the varsity women’s swimming and diving team, said she twisted her ankle twice on Sept. 10: the first time at a lift for the team and the second walking later that day. She said she feels it is challenging to get around campus while on crutches with her sprained ankle.

“It’s what you get on a college campus, but I do think that there could be way more accessibility ramps, especially because there aren’t many and there are lots of stairs on this campus, like getting up between the quads,” she said.

Palfreyman said she thinks the college could be doing more for accessibility, like making sure elevators are running smoothly and implementing more than one elevator in some of the academic buildings.

“I think it’s just they should try and make sure that if they aren’t going to be doing the most for accessibility, the little, the amount that they are doing, they should be keeping up to high standards,” she said.

Laura Davis, assistant housing director for the Office of Residential Life, said housing works closely with SAS to support students and gets notified when SAS approves a housing accommodation for a student.

“We simultaneously will put out information, virtual or in person, depending on the summer sessions that we have about housing, and we include our accommodation processes as well,” she said. “We really try to put information out early when we can so that students are able to then work with [SAS].”

Davis said accommodations for housing can happen at any time during the year and be temporary depending on specific student needs.

“Whenever we receive an accommodation, we’ll typically look up, see what’s going on with that student’s housing … and then we’ll reach out to the student and talk about next steps and what that looks like,” she said.

Trainor said she thinks the most important thing that the college can do now is listen to students with disabilities. She said she has brought up the topic of accessibility to a few of her professors, but feels like she hit a dead end.