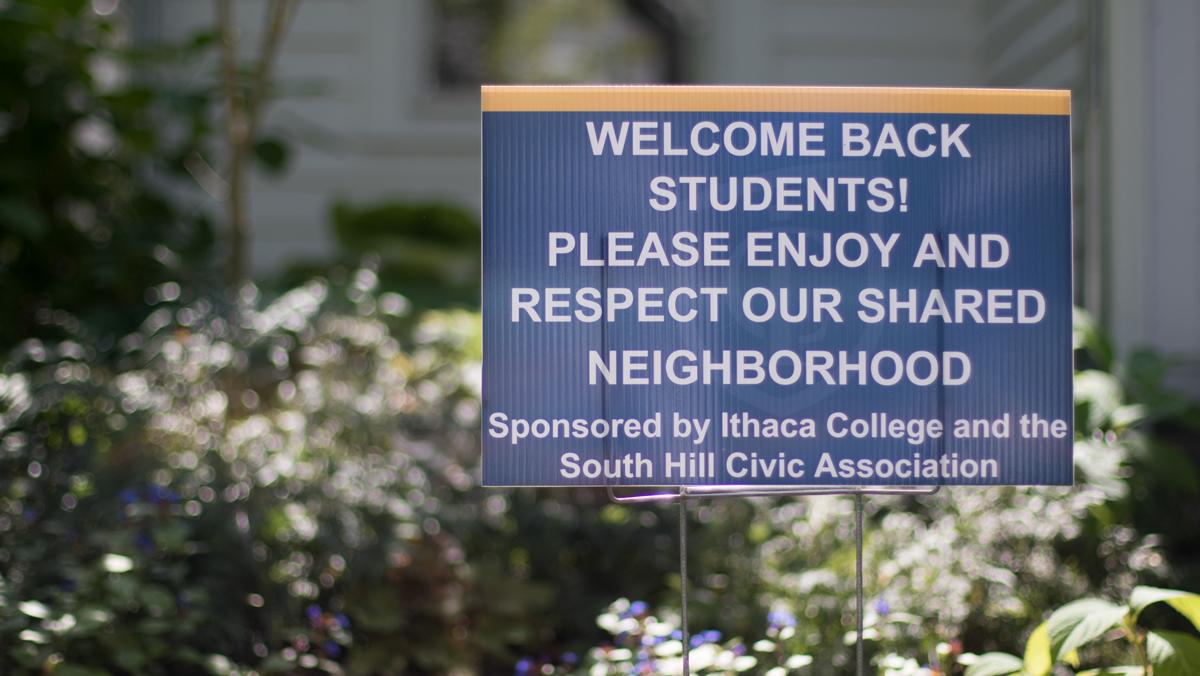 Photo Illustration by Connor Lange
For local residents these neighborhoods are where they are trying to raise families, run businesses or simply sleep undisturbed on weekend nights. Ithaca College students often only travel by foot at night to find parties on these streets.
By Laura O'Brien — Contributing Writer
Published: September 21, 2017

On South Hill, where many Ithaca College upperclassmen rent homes, a local movement among frustrated local residents is gaining momentum. Many have expressed exasperation at the rowdiness of students, given that more and more are moving into family neighborhoods.

For many students at the college, the side streets between the campus and The Commons are often only traveled by foot at night to find parties, or when events like Kendall Day bring hordes of students marching through these neighborhoods for hours. For local residents, however, these neighborhoods are where they are trying to raise families, run businesses or simply sleep undisturbed on weekend nights.

Although the grievances against noisy college students in these South Hill neighborhoods are far from a new phenomenon, a proposed housing project behind an already existing duplex at 217 Columbia Street has prompted many permanent residents to declare that enough is enough when it comes to college student rental expansions. According to data collected by the South Hill Civic Association, this expansion of student housing has been slowly growing for decades. For example, on Pleasant Street, of 22 properties surveyed 1989, six were rentals and 16 were owner-occupied. In 2013, 14 of those properties were rentals and only eight were owner-occupied.

Charlie O’Connor, executive for Modern Living Rentals, owns the contested 217 Columbia Street housing plot. O’Connor said he was planning to add a duplex with eight bedrooms in the backyard of the pre-existing six-bedroom duplex on Columbia Street. According to Kenn Young, owner of the Inn on Columbia and an architect, the original design for the new unit left no opportunity for a family to arrange furniture for any sort of general living space, which he felt was necessary to attract permanent resident families. These initial designs critiqued by Young have been altered slightly, O’Connor said, after discussing the issues with residents. Young said the student disruption also affects his business when the noise of his student neighbors surpasses a tolerable level. On several occasions, Young said, he has been forced to give his guests full refunds on their stays because of the ruckus created by college parties and student passersby.

“After the initial objections, I solicited additional community input and … felt that many of their concerns were addressed by altering the originally submitted plans to cater to a different demographic,” O’Connor said.

Young said he is currently working on a petition calling for a moratorium on the project in order to reduce the disruption that many students bring to the South Hill neighborhoods.

John Graves, resident of Pleasant Street and leader of the South Hill Civic Association, said he was especially exasperated by one recent disturbance that occurred on his street.

“This weekend, the house across the street shot off, at about 11 o’clock at night, some fireworks, and the house next to them has a premature baby that was just born,” Graves said. “The baby is just tiny. So this bang that just happened, these fireworks, you’ve got to wonder, did they even think about it?”

Janet Fortess ’70, longtime South Hill resident, said she has had similar experiences with undergraduate students while living on Columbia Street. Fortess said she moved to Columbia Street in 1974 after graduating from the college and that she has seen the composition of the street shift notably since then. She said that the neighborhoods that once consisted of members of the working class have been replaced by an overwhelming number of student renters.

“The corner house used to have more of a picket fence,” Fortess said, referring to a house on the street she lives on. “Kids used to set it on fire. It’s illegal, it’s dangerous, and it’s sort of like, ‘Hello?’ I don’t know if there’s any way to turn the tide back.”

As president of the South Hill Civic Association, Graves said, he works closely with the college’s IC Community Work Group to attempt to resolve issues involving rowdy students. Recently, their combined efforts resulted in the creation of late-night TCAT bus routes that take students back up to the college from The Commons, rather than these often-intoxicated students stumbling through neighborhoods late at night, Graves said.

The college and neighborhood have also been working with local police forces. Rory Rothman, associate provost for student life, said the college’s Office of Public Safety and Emergency Management and the Student Governance Council have been working with the Ithaca Police Department, as well as the Tompkins County Sheriff’s Office, to distribute educational resources, such as door hangers that include information on the details of noise ordinance regulations, to students living off campus.

“The goal is to share information, make direct contact and to encourage responsible and respectful behavior and positive community relations,” Rothman said.

The college has also distributed lawn signs that welcome students back to the area and remind them to be mindful of their neighbors. Ironically, Graves said, most of these signs have already been stolen, causing some to bring the signs in at night to prevent students from carrying them off.

In addition to working with the college to resolve the issue, Graves, along with Young, has taken proactive measures to keep students at bay on the weekends.

“We actually patrol on Friday and Saturday nights,” Young said. “I walk around with a plunger on my shoulder because people don’t know what I’m going to do with the plunger. It calms them right down. … But we can’t do it all the time, and we can’t see everything.”

Jamie Williamson, public information officer at the Ithaca Police Department, said that while he does not encourage residents to confront students they perceive as threats, people do have a right to protect their property.

“These folks have worked hard all their lives to have a beautiful home and to have it destroyed by anybody, not just a college kid … it’s unfair,” Williamson said.

Senior Ryan Gravley, who lived on Pleasant Street last year, said the unruly behavior is orchestrated by a small sample of the off-campus student body. Gravley said the police were often called on students throwing parties on nearby streets but that she did not have any personal experiences angering neighbors.

“The poor choices and actions of the few perpetuate the perceptions that the locals have of the students living on South Hill,” Gravley said.

Junior Carlie McClinsey, president of the Student Governance Council, urged students in an email sent Sept. 6 to take local residents into consideration when passing through or living in South Hill neighborhoods.

“I’m not asking you to stop going out, I’m just asking for us all to remember to treat our Ithaca neighbors as you would like them to treat you,” McClinsey said in the email.

McClinsey said the email was not sparked by a particular incident but that she had heard from residents at the beginning of the academic year that student rowdiness had not subsided over the years, so she said she felt compelled to ask students to respect their neighbors.

Williamson said conflicts between students and permanent residents living on South Hill have always existed in the city. He said that usually officers are called to South Hill neighborhoods about 10 times a weekend for what they call “quality-of-life issues,” which would include noise complaints, open containers violations or public urination violations. He said that when the academic year begins, the Ithaca Police Department increases patrols in areas that students are prone to be rowdy in.

“Its very important for homeowners and students to be able to coexist,” Williamson said. “There does seem to be an adversarial relationship between year-round residents and students, and I think both parties would bode well with each other if they were able to find common ground and some respect for each other.”

Bonnie Prunty, director of the Offices of Residential Life and Judicial Affairs and assistant dean for first-year experiences, said there has not been an increase in the percentage of Ithaca students living off campus. She said the college has built more on-campus housing options for upperclassmen during the last several years, including more Circles Apartment housing and additions to the Terrace housing. The addition of new housing began in 2010.

“I don’t know if it’s that over time, as different housing units have sprung up in different places, whether there’s just more concentration of students in certain areas that makes it feel different in the communities surrounding,” Prunty said.

This academic year, 540 non-senior students are living off campus, and 45 percent of the senior class is living off campus, Linda Koenig, assistant director for Housing Services and Communications in Residential Life, said via email.

Senior Maggie Seitz, resident of Prospect Street, said she thinks this issue does not stem from students who are purposefully disrespecting the South Hill neighborhoods but is instead a byproduct of two populations coexisting on the same streets.

“We all love the town we live in and the people who live here with us, but we’re also college students, and that has a different vibe than family communities,” Seitz said.

Rob Gearhart, associate dean of the Roy H. Park School of Communications and Common Council member, also pointed to the nature of student housing versus that of permanent residents. Gearhart said the recent reaction of local residents to the proposed Columbia Street duplex largely stems from the changes in atmosphere of neighborhoods that house a large number of college students.

“There’s a real housing shortage,” Gearhart said. “So when housing starts to flip like this, from property that’s a place where residents live and it’s bought by someone who wants to convert it to student housing and it starts to change the characteristics of a neighborhood, that’s when people really start to rally behind one side or the other.”

Cynthia Brock, Common Council member, said the Planning and Economic Development Committee will be taking a closer look at modifying the zoning on South Hill to better accommodate owner-occupied properties and family-friendly neighborhoods.

As a temporary solution, while the council takes a closer look at these long-term zoning options, the Planning and Economic Development Committee voted to begin the process of instating an overlay zoning district, which would only permit one primary structure per property. on South Hill during its meeting Sept. 13. This option was deemed more appropriate than the other proposed options of a temporary moratorium or change in zoning.

President Shirley M. Collado said at a student media press conference Aug. 29 that addressing the tensions between South Hill residents and student renters is on her agenda for the coming year. She said that while college students have made a positive impact in the Ithaca community, there are still tensions that exist.

“Something I’m hearing as well … is that we do have members in our community who want our students to be better neighbors,” Collado said. “ This isn’t the only place where that happens, but it’s always distressing for me as a leader to hear when our students are not participating in ways that are respectful and healthy and safe.”

In order to avoid a surplus of first-year students in temporary housing in the future, Ithaca College has released preliminary plans to expand the Circle Apartments by adding nine new buildings and adding approximately 2,500 square feet to the Community Building possibly, by fall 2011.

The Office of Residential Life will now approve students for off-campus housing during the fall semester.