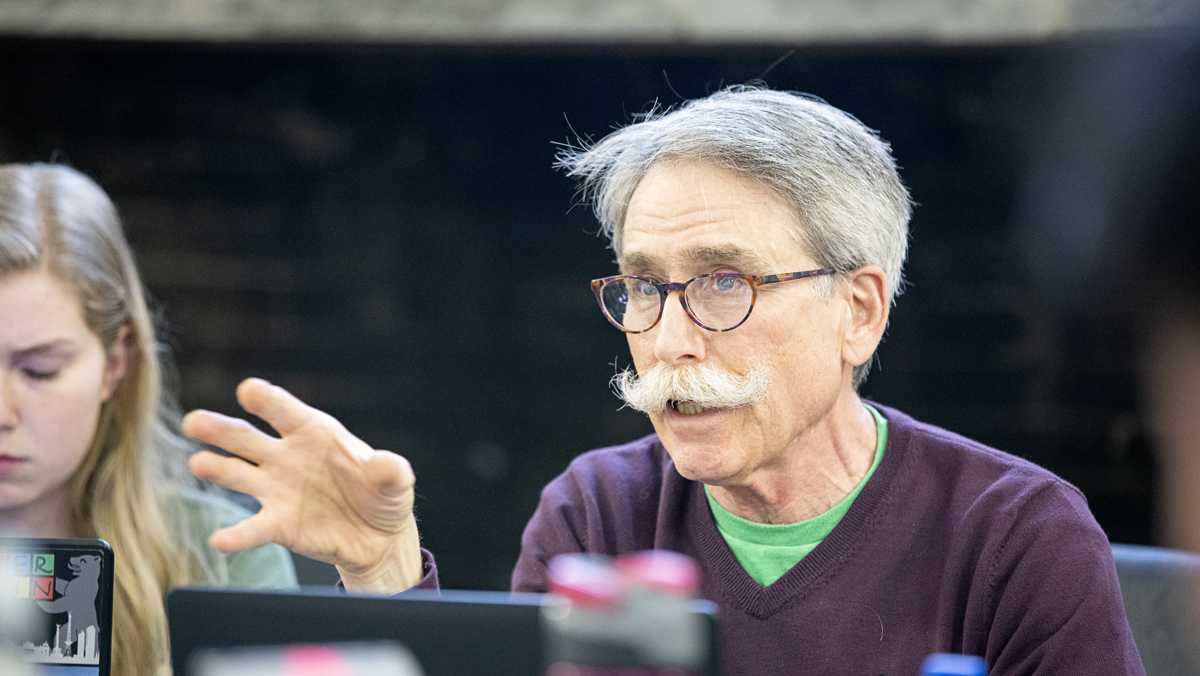 Reed Freeman/The Ithacan
Ted Schiele, planner and evaluator for the Tompkins County Health Department, said he has been working with students and faculty at the college since 2015 to implement a ban on tobacco products, like cigarettes, hookahs and vape pens, across the entire campus.
By Sam Haut — Senior Writer
Published: March 4, 2020

Ted Schiele, planner and evaluator for the Tompkins County Health Department, met with the Ithaca College Student Governance Council on March 2 to discuss the feasibility of a smoking ban at the college.

Schiele said he has been working with students and faculty at the college since 2015 to implement a ban on tobacco products, like cigarettes, hookahs and vape pens, across the entire campus.

According to the policy, smoking includes but is not limited to cigarettes, cigars, pipes, electric cigarettes or other vaping devices.

In 2015, Schiele said that he spoke with Tim Conners ’17, who worked with Colleges Against Cancer, which is part of the American Cancer Society’s push to eliminate cancer, to push for a bill to the ban smoking of tobacco products at the college, and in 2016 the SGC passed a bill to make the college tobacco-free in a year, however, nothing ever came of that bill.

Schiele said he met with Rory Rothman, retired associate provost of student life, student affairs and campus life; Title IX Coordinator Linda Koenig and Bill Kerry, director of the Office of Public Safety and Emergency Management to discuss a tobacco ban in 2017. He said that after putting together a policy proposal, Koenig and Kerry said they would take it to the president’s council in February 2018, but that also did not happen.

Koenig and Kerry did not respond to a request for comment.

Schiele said through his work with Tobacco Free Tompkins, his goal is to make as many areas smoke–free as possible.

In 2017, New York State banned vaping in all areas that smoking was also prohibited and on Feb. 6, 2020, the federal government imposed a ban on flavored vaping products.

Junior Elijah Nishiura, vice president of campus affairs, asked Schiele who the SGC could talk with to work toward implementing a smoking ban.

Schiele said the SGC should start by talking to students, but that a school like the SUNY Cortland was able to become a tobacco–free zone through their administration rather than student action.

Senior Varsity Athlete Senator Alexander Perry said he is concerned about what will happen to the people at the college who smoke cigarettes or vape if the SGC does pass a ban.

“So I’m wondering what we can do as a community if this were to be passed, how that will affect all of the workers,” Perry said. “Because I know it’s not just the staff, there’s also students and faculty. So, I think that we have to carefully consider the ramifications that it would have on the community.”

Schiele said that if a smoking ban does pass, then it would not take effect immediately, and instead would approximately 12 to 18 months for the college to figure how to implement the ban, what would be done to enforce it and how the administration would inform the campus community.

Freshman Soumyaa Joshi, vice president of academic affairs, asked Schiele about what the college could do to help those that are smokers who would find it difficult to cope if a smoking ban is implemented.

Going forward, junior Senate Chair Abigail Murtha said, if a member of the SGC feels strongly about a smoking ban, they can start working on a bill, though it is unclear how much of the SGC will support one.

Sophomore Hunter Simmons, Class of 2022 senator, said he would support a smoking ban, but freshman Connor Watson, student liaison to the Alumni Association Board of Directors, said he would be against it. Perry and junior Eva Kirie, vice president of communications, said they want to do more research on the issue before deciding their stance on the issue.

Change in the air: e-cigarettes are a growing trend among students