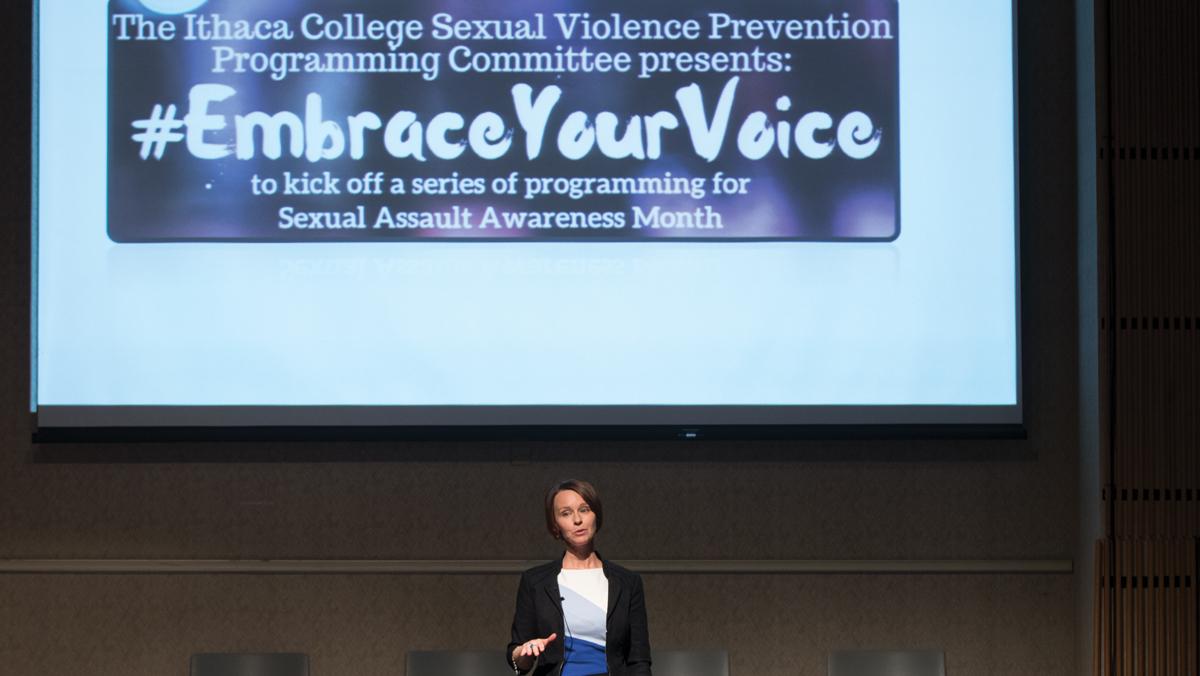 Sam Fuller/The Ithacan
Ariana Blossom, a researcher who served as a chemical specialist in the U.S. Army for four years, discussed her experiences with unhealthy masculinity in the military on April 2.
By Hannah Fitzpatrick — Staff Writer
Published: April 11, 2018

Three speakers discussed their experiences with sexual violence at the #EmbraceYourVoice kickoff event on April 2, the beginning of a series of programs for Sexual Assault Awareness Month.

The program, which was held in Emerson Suites, included the three speakers sharing their stories and individual projects they conducted to raise awareness for the prevention of sexual assault, followed by a Q&A.

The first speaker that presented was Ariana Blossom, a researcher who served as a chemical specialist in the U.S. Army for four years. During her time in the military, she experienced the effects of unhealthy masculinity. She argued that in our contemporary society, there is a narrative that teaches men to not show qualities that are usually attributed to femininity.

“This message tells young boys, ‘You can’t be vulnerable, you can’t be sensitive, and you can’t be nurturing because we’ve taken those attributes and feminized them,’” Blossom said. “This causes them to believe that they must appear tough and unemotional, even in moments when they should be anything but that.”

She also said that this narrative of toxic masculinity supports a culture of sexual harassment. She said that when she was stationed at Fort Carson, Colorado, she noticed that she was getting hit on constantly and that the men she worked with would say sexist comments around her. She also learned through other experiences, such as receiving lewd comments from male soldiers and being in an abusive relationship with a male soldier, that paying close attention to her surroundings was extremely important.

“That year in Colorado taught me that we must redefine masculinity to include vulnerability, sensitivity and nurturing as sources of strength for men,” Blossom said. “We need men that are connected to their own rich, inner emotional lives and who see themselves as co-conspirators in making a safer world with women.”

The second speaker was senior Yanina Mazurkevich. She created the viral photo series called “It Happens” after the release of Brock Turner in 2016. She said that her inspiration behind the project was not only based on frustration and anger towards the outcome of the Brock Turner case, where he was only sentenced to three months in prison for raping an intoxicated woman in January 2015, but also the personal experiences that her friends, family, and even herself, have had with sexual violence.

“I was lucky to have the opportunity to put my built–up anger, sadness and frustration into this project,” Mazurkevich said.

Mazurkevich received feedback from people all over the world, including backlash about the series’s being too triggering. This made her realize that the topic of sexual violence is often dismissed and ignored, which is something that contemporary society should not be doing.

“We have become accustomed to live comfortably and to turn our heads away from these horrific events, and that’s privilege at its finest,” Mazurkevich said.

The final speaker was Davi Mozie, an expert in violence prevention strategies for military and youth. She was also a medic in the U.S. Army and is the founder of FIT for Peace Inc. She said the work she has done to help those who have experienced sexual violence in their lifetime was inspired by personal experiences from her friends and family.

After each speaker presented, the event turned to a panel discussion with all three speakers, where they answered questions from the audience. The panel discussed topics such as how each speaker defined sexual violence, how one can break the cycle of sexual assault at the college and on other college campuses and how to support someone who may have experienced sexual violence.

There were also numerous organizations who had tables set up outside Emerson Suites, including the Office of Public Safety and Emergency Management, Sexual Harassment and Assault Response and Education, OneLove, The Advocacy Center and Planned Parenthood. Each table provided resources that people who have, or know someone who has dealt with, sexual violence could utilize.

Sophomore Alex Gray thought the presentation brought up a lot of conversations that he believes are important to have on campus.

“Sexual assault and sexual violence is something that happens a lot in the U.S.,” Gray said. “This event helped open a conversation about this topic to more communities on this campus.”

Freshman Julia Cohen thought that the event raised awareness for the ongoing issue of sexual violence.

“It is such a prevalent issue, especially on college campuses,” Cohen said. “I think raising people’s awareness and telling people’s stories about their experiences shows just how problematic this issue is.”