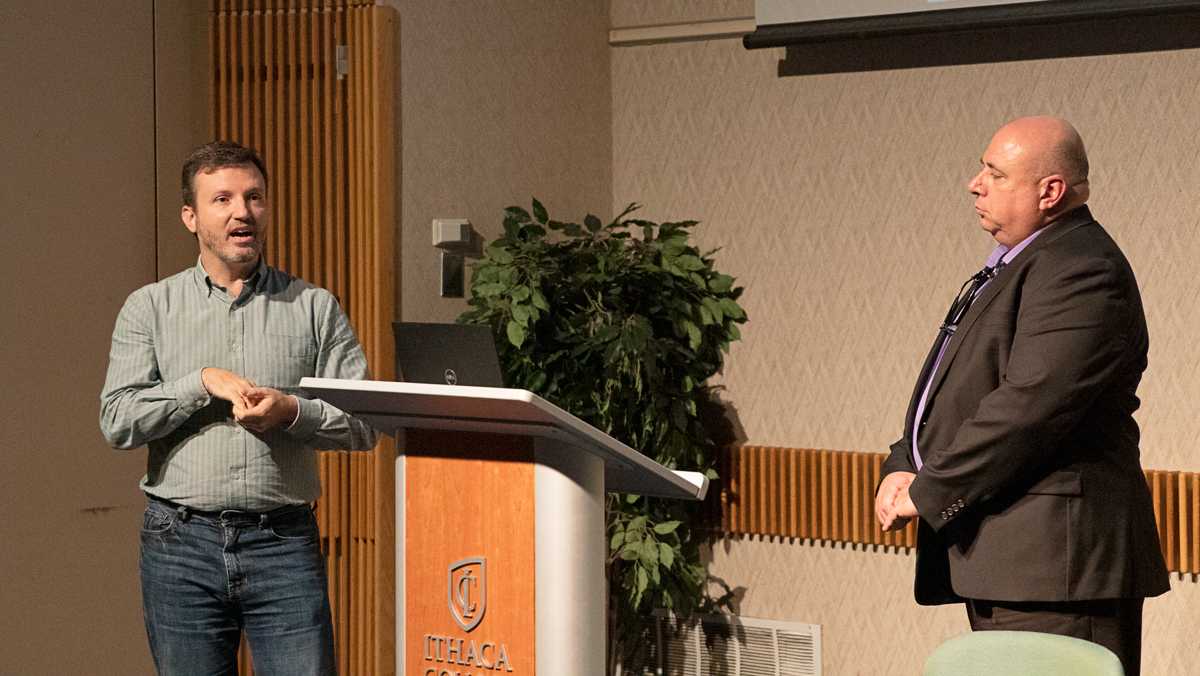 Erica Kleeman/The Ithacan
(From Left) Nizar Farsakh, Chair of the Board of the Museum of the Palestinian People and and Ori Nir, Director of Communications and Public Engagement at Americans for Peace now engaged in peace-oriented dialogue about the Israeli-Palestinian conflict.
By Cody Tayor — Senior Writer
Published: September 18, 2019

Experts on the Israeli-Palestinian conflict came to Ithaca College on Sept. 17 to discuss their perspectives on growing up in a conflict zone and the need for a peaceful resolution.

The event, “Side by Side: Parallel Histories of Israel and Palestine,” provided two viewpoints about the ongoing Israeli-Palestinian conflict. Approximately 50 people were in attendance. The event was cosponsored by Hillel at Ithaca College, the Department of Politics and the Office of Religious and Spiritual Life. Ori Nir, director of communications and public engagement at Americans for Peace Now, provided an Israeli perspective, and Nizar Farsakh, speaker at Farsakh Training and Consulting and chair of the board of the Museum of Palestinian People, spoke about growing up on the Palestinian side of the conflict.

The Israeli-Palestinian conflict has been ongoing since the 20th century. The conflict is centered around Jewish and Palestinian groups claiming they both have ancestral rights to the same land. This has led to the emergence of a few extremist groups and violence resulting in thousands of casualties on both sides.

Lauren Goldberg, executive director of Hillel at the college, said the event was held due to student demand.

“Last year, it was identified by numerous students that we weren’t talking about the Israeli-Palestinian conflict,” Goldberg said. “It was a goal of ours at the end of last year, projecting into this year, to start out the year by addressing this.”

At the event, Nir provided context on the long-term impact of the Israeli-Palestinian conflict by telling stories about his parents’ experiences while living in Israel.

“[My mother’s] first memory is of her friend’s father being murdered by a Palestinian terrorist or freedom fighter,” Nir said. “My father’s first memories were of the Arab uprising of 1936.”

Farsakh said that because of the pain he felt as a result of growing up in the conflict, he used to support Palestinian violence.

“I used to support suicide bombings because what I was going through,” Farsakh said. “I thought that we needed to inflict more pain on them so that they think twice before they inflict pain on you. All that is missing there is putting yourself in their shoes and thinking they are probably feeling the same way, so it becomes a vicious circle. But because you are in so much pain, you don’t have the space to even think of others’ shoes.”

“What a two-state solution means is the establishment of a Palestinian state that would be independent and live in peace with Israel,” Nir said. “It is in Israeli national security interest for Palestine to become a state because if Israel continues to rule over the Palestinians without giving them equal rights, we will be in a situation that is akin to apartheid, what we saw in South Africa.”

Farsakh said it is imperative for individuals to become educated about the conflict.

“You really are doing a disservice if you really care about the people involved in the conflict if you hide under the disguise of ‘It’s complicated,’” Farsakh said. “It is not complicated, it is just human nature, and we can fix this.”

Sophomore Lauren Barnes said she decided to come to the event in hopes of gaining a better understanding of the conflict.

“Before I came to the event, I was unsure what the conflict was actually about,” Barnes said. “After listening to these firsthand accounts, I have a better understanding of what it feels like for families growing up in constant conflict.”

Nir said he was impressed with the number of students who came to the event and were interested in this conflict.

“There is a great deal of motivation on behalf of the students to get involved and make a difference, to be activists in support of Israeli-Palestinian peace, and this is very encouraging,” Nir said.

Goldberg said she understands it can be uncomfortable to get involved with a conversation about a sensitive topic like the conflict, but she was happy with the turnout of the event. She said there will be a follow-up event regarding the discussion Sept. 20 in Muller Chapel to continue the conversation.

“What we saw tonight was a very specific cross section of this political conundrum,” Goldberg said. “There are so many other perspectives that we could have put forward, but you can never share all of them at once. If we don’t wade our foot into the water and start the conversation, then it’s never going to happen.”