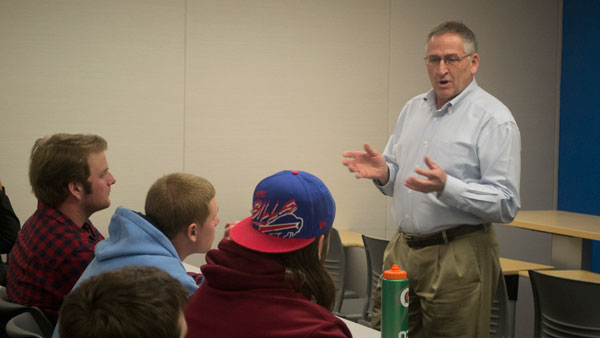 This semester will mark the last time a student will have the chance to claim a sport studies major at Ithaca College.

In addition, all who are currently enrolled must complete their degree requirements by 2018, because classes for the major will not be offered beyond that time.

Linda Petrosino, former dean of the School of Health Sciences and Human Performance and current interim provost and vice president for educational affairs, said the decision to dissolve the sport studies major came after a program review, which included careful study and analysis of the Department of Sport Management and Media as well. She said the sport studies major had experienced a record low enrollment. Petrosino originally announced the deletion of the major though an email sent out to students in the Department of Sport Management and Media on April 22.

According to the Office of Institutional Research, from 2009 to Fall 2013, the number of undergraduate students enrolled within the sport studies major program had decreased from 20 to seven. However, Stephen Mosher, professor in the Department of Sport Management and Media and Coordinator of the Sport Studies programs, said there has been a great increase in students enrolled in the major for the 2014 year. Currently, he said, there are 19 students in the major.

In addition, Mosher said the minor will not be deleted anytime soon, but because of the deletion of the major, the minor can grow a little bit more to incorporate more aspects that the major included, like class requirements. He said at the moment, because the major is still intact, the changes are limited.

Both Mosher and junior Elijah Breton, a double major in communication studies and sport studies, said among those students enrolled within the sport studies program, almost half labeled themselves as a minority.

Breton said he spoke with Petrosino on Aug. 21 and asked her why a major that includes a diverse student body would be discontinued, to which he said she had no comment.

Petrosino did not respond to requests by The Ithacan for comment on the assertions made about the racial aspect of discontinuing the major.

Mosher said he agrees that difficult decisions must be made, and a college can’t be all things to all people. However, he said he still finds the decision difficult to deal with.

“As a faculty member who has all of his degrees in the liberal arts, I find it distressing that a program that fully and completely embraces the ICC mission would be deleted,” Mosher said.

Michael Silipo ’11, an assistant coach in intercollegiate athletics, said through the major he learned about life and different experiences people have had through sports, which he uses when coaching his players.

“I wanted something specifically that was going to prepare me to be a coach, in terms of a major,” Silipo said. “I think that program allows you to learn the greater side of sports, besides the who wins and loses; you know, the greater outcome being what can be learned from sports.”