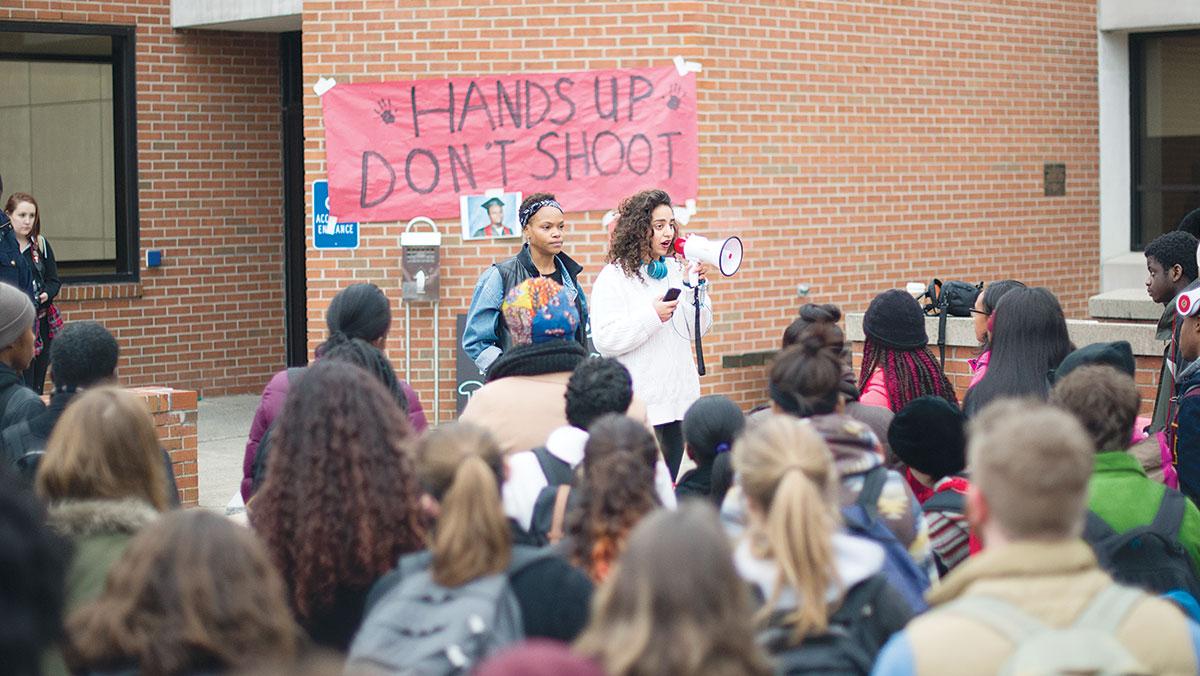 This week over 200 Ithaca College students withstood cold temperatures and gathered to demonstrate with students and others across the country and around the world, sharing their reflections and personal stories about how police brutality and violence affect them.

A grand jury’s decision not to press charges against Officer Darren Wilson in the Aug. 9 shooting death of unarmed black teen Michael Brown has led to rallies and protests across the country. In solidarity with other walk-outs around the nation on Dec. 1, students organized a “Hands Up Walk Out” rally at the Free Speech Rock outside of the Campus Center.

Events were held in over 30 cities worldwide and at many colleges throughout the country. Rochester University, Binghamton University, Yale University, Stanford University and Boston College were some of the many colleges in the nation that hosted similar events, in addition to rallies in British Columbia and Tokyo.

After the grand jury decided not to indict Wilson on Nov. 24, protests erupted in Ferguson, Missouri, and cities all around the country. In Ithaca, protesters stopped traffic at the intersection of North Tioga Street and Court Street. On the night of the non-indictment, people gathered in New York City and Los Angeles, stopping traffic on major highways. Protests and rallies have continued despite Wilson’s resignation from the Ferguson police department on Nov. 29.

Around 225 students and faculty attended the rally, in which student speakers shared their stories and feelings about police brutality, structural violence and racism. The rally was based on the ruling in the Ferguson incident as well as the 43 missing student activists from Iguala, Mexico, who were arrested by local police on Sept. 26 and then handed over to a major drug cartel.

Students at the college walked out of their classes at 1:01 p.m., in accordance with 12:01 p.m. Central Standard Time, when Brown was shot, to rally for two hours despite the cold temperature.

Sophomore Dillon Randolph, one of the 10 student organizers of the event, said he was impressed by the number of speakers and the authenticity of the event.

“It was astounding,” he said. “It exceeded my expectation. It was very heartwarming, even out there in the 30-degree weather.”

In between personal speeches by students, the crowd chanted “Hands Up, Don’t Shoot”; “No Justice, No Peace”; and a South African protest chant which translates to “Not One More.” Signs at the rally included some that referenced Shawn Greenwood, a black Ithaca man who was killed by police on Feb. 23, 2010, and “Stop the New Jim Crow” signs. After a few planned speeches by organizers, the event was opened up for members of the crowd to speak. Students lined up to address the crowd through a megaphone.

Kayla Young, a senior and another organizer of the event, said the rally outside the Campus Center provided students a chance to communicate their feelings about issues of race, police brutality and the events in Ferguson.

“Those are students who have held that in all semester long, looking for a place to grieve,” she said. “It was really powerful to hear from a lot of those students who were just honest.”

The event began with a moment of silence for victims of police brutality and structural violence, and included chants, poetry and sharing from both organizers and attendees.

Crystal Kayiza, president of the Student Government Association, was another organizer of the event and said during the rally that students should take the spirit of the event into their everyday lives.

“We have to continue this conversation,” she said.

To continue the conversation, the organizers of the rally scheduled a meeting Dec. 3 to discuss student activism at Ithaca College. Organized by JUICE, a student group opposed to police militarization, the purpose was to allow students to engage in dialogue about their experiences with race and forms of resistance, according to the Facebook event.

Rita Bunatal, a junior who attended the rally, said she was happy to see so many people share their stories. However, she said although social media activism is helpful, she wished more students who participate in such activism attended the rally.

“I would like to see more Ithaca students come out to these events,” she said. “There’s so much more than social media activism. These events do happen.”

Organizer Luna Gallegos, a sophomore, explained the situation in Mexico and spoke about the passion of the missing Mexican student activists. She said students here should be inspired by those missing students to make change here. She asked the crowd what they have to lose by speaking out.

Steven Kobby Lartey, a senior and another organizer, responded to this question.

“We have nothing to lose but the chains of oppression and injustice,” he said.

Many speakers shared their perspectives. International students spoke about police and the military presence in their countries, while many other students shared personal encounters with discrimination and their own fears about how police brutality could affect them. Other speakers spoke against the sense of complacency they feel is prevalent on this campus in regard to racial issues and said they wished more students had joined the discussion.

One of the attendees of the rally, Audra Prowell, spoke about the prevalence of discrimination at the college. Prowell said she and her friends often talk about how they have felt offended on this campus.

“The conversations on campus are disturbing,” she said. “Ignorance is not an excuse, ever. The ignorance, the disrespect in the classrooms, needs to stop.”

Young said the issues discussed relate to all students on campus.

“This is about making the campus better for all of us, its not about only a certain group,” she said. “It’s about wanting to have a holistic, real experience.”