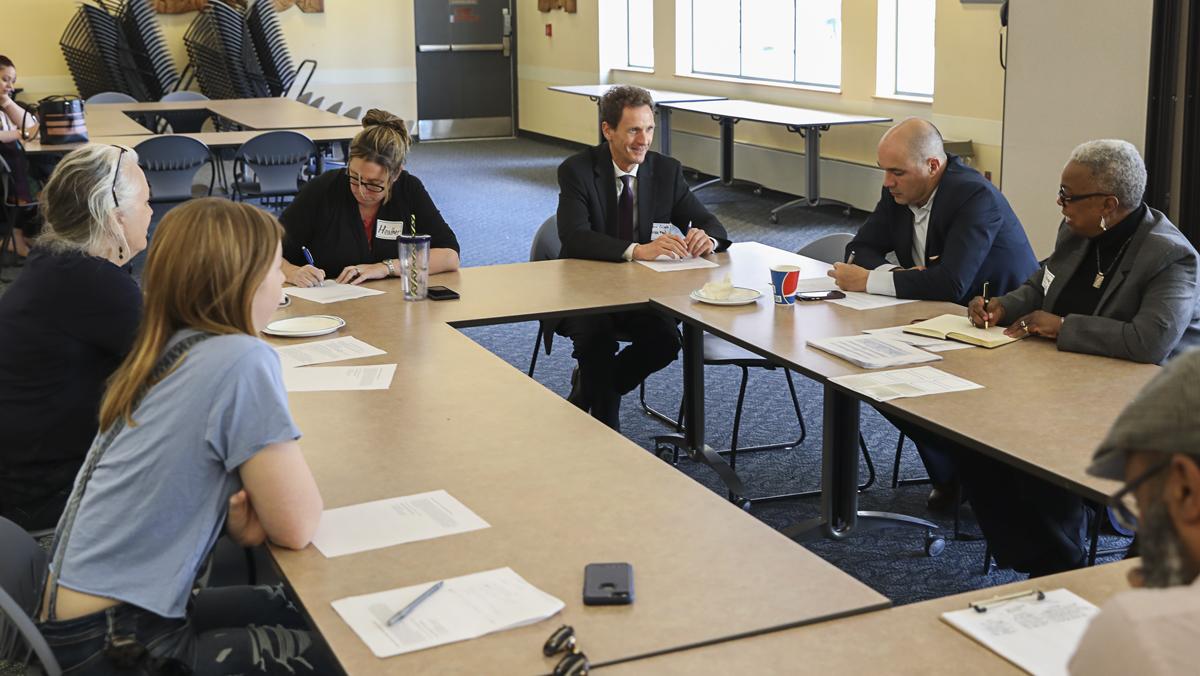 The Strategic Planning Steering Committee held a meeting with the community April 9 at the Tompkins County Library about how Ithaca College could better connect with health partners in the community.

The representatives from the college included Paula Younger, executive director for government and community relations; Bill Guerrero, vice president for finance and administration; and La Jerne Cornish, provost and senior vice president for academic affairs. During the meeting, four representatives from local businesses listened as Guerrero, Cornish and Younger walked them through the concepts and values guiding the design of the five-year strategic plan.

Cornish expressed interest in developing interconnections with schools, partners and different disciplines in the community through the plan. Cornish said that the number of students attending college in the Northeast has been dropping and is projected to keep dropping in the future.

In order to remain competitive, Cornish said she is interested in partnering with Tompkins Cortland Community College to make a nursing program for students at Ithaca College. This plan would allow students to obtain an associates degree through Tompkins Cortland Community College and finish their bachelor’s degree in nursing at Ithaca College. The goal is to eventually allow the graduates to obtain work through a partnership with Cayuga Medical Center.

The committee held a similar meeting with the community April 1 focused on strengthening connections between the college and governmental and nonprofit organizations.

Heather Mount, executive director for Coddington Road Community Center, said there have been several conversations over the years about how the college could connect with the center. She said she would like to see this collaboration happen because she believes students from the college can get involved in helping with the summer camp and after–school programs the center organizes.

“There are lots of things that we could do to connect with students as far as internships, volunteers, tutoring programs or even just use of our space,” Mount said.

“I think the collaboration between both organizations is great,” Collett said. “It is helpful for the ICPT students to be able to practice in a residency program, and it provides us the opportunity to hire the best of the best.”

Jude Rose, child care planner for the Child Development Council — which works closely with county, municipal and workforce planners to coordinate child care development with businesses — said she would like to see students from the college volunteer and intern at her business in the same way that Cornell University students do.

“Some of the ways that I interact as an agency with Cornell, I don’t know where to go at Ithaca College,” Rose said. “I thought the session was great. It was really insightful, and there were a lot of comprehensive thoughts. I think the vision is really inspiring.”

Taili Mugambee, program director of the Ultimate Reentry Opportunity, an initiative that works to eliminate systemic barriers for people that are coming home from prison, said he came to the meeting to see what the college has developed so far. He said he wanted to see if the college is incorporating tactics like reaching out to the native Cayuga peoples to include them in the community events and discussions.

“I have to attend more meetings to get an idea that things are being done, but on the surface, I feel like they are making strategic moves to incorporate the community,” Mugambee said. “I think it is going to take more community conversations and more people, but I think they are moving in the right direction to getting community feedback.”

Cornish said she loves talking to the community members to get an idea of how the college can better suit their needs.

“I am always excited to talk to people in the community; I like to know how they perceive us,” Cornish said. “I like to know that the needs of the community are and how we can engage in thought partners to solve some of the problems that are right here in Tompkins County.”

College gets input from community for strategic future