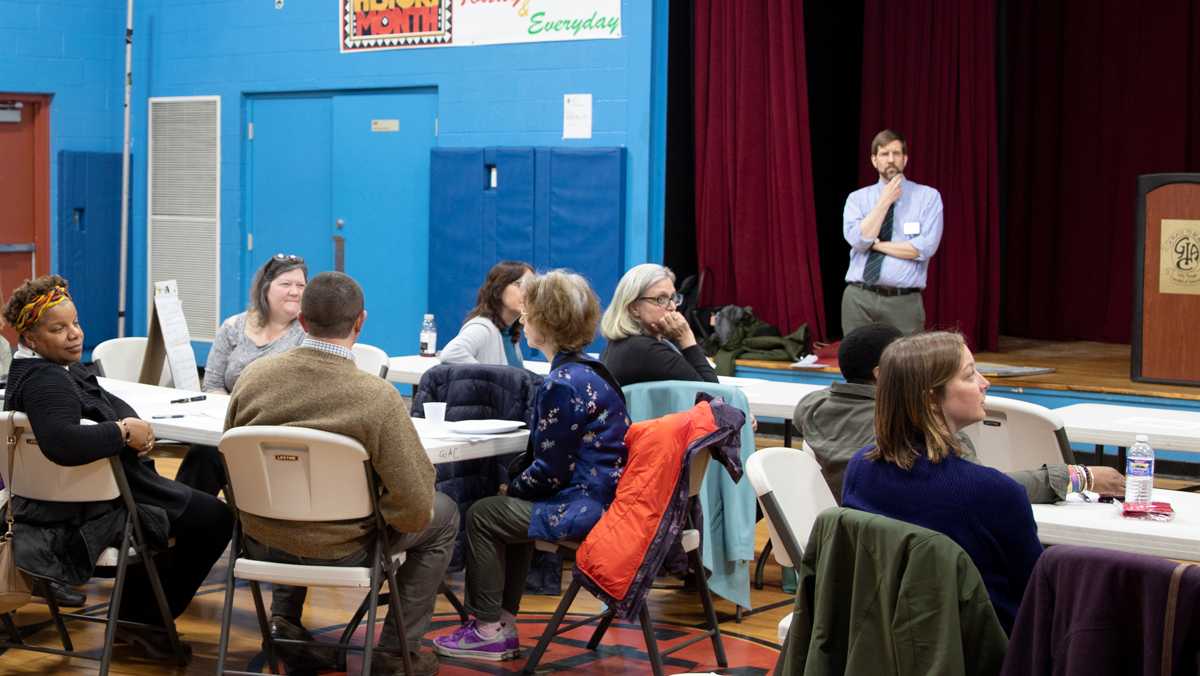 The Strategic Planning Committee co-chairs held a forum with local community members April 1 to get input from members of the community about what they wanted to see addressed in the college’s strategic plan.

Approximately 30 people from the local community, including those from nonprofit organizations and governmental groups, attended the forum. It began with an overview of the progress the steering committee has made on the strategic plan so far. The strategic plan is a five-year plan outlining Ithaca College’s objectives for the future.

The current draft of the vision statement for the plan is, “Inspiring bold thinking to create thriving communities.”

During the forum, the co-chairs divided the attendees into three groups in which they brainstormed ideas and provided written feedback on how to improve the college. Most of the feedback called for the college to increase its engagement with the community. In the past, there have been tensions between the college and community members due to rowdy student behavior in the local area.

Some attendees suggested the college do more to help faculty with housing — an issue for many faculty members because the housing market in Ithaca is so saturated. They also suggested that the college join the Community Housing Development Fund and work with the community on child care issues. The Community Housing Development Fund is a collaborative effort between Tompkins County, the City of Ithaca and Cornell University to provide funding for organizations in the county that work toward making housing more affordable for individuals in need.

Another suggestion brought up by an attendee was for the college to collaborate more with the community on “integration of knowledge base” — meaning that the college should work to better integrate the expertise of faculty and the community into the learning process for students.

La Jerne Cornish, provost and senior vice president for academic affairs and co-chair of the steering committee, said her office will process the information and begin to prioritize objectives for the college.

“The big task that is ahead of us is to take all these big ideas and start to prioritize them,” she said. “This is a five-year plan that must be actualized and realized — we are not writing a plan to put on a shelf. We are here to do that which we say we are going to do.”

Larry Workman, director of contract staffing at Challenge Workforce Solutions, said he wanted to see more integration between the college and the community. His company provides staffing for the dish room in the dining halls on campus and supplies the college with various staff members.

“For us at Challenge, we want to see a continued partnership and even a growing partnership at Ithaca College,” he said. “There’s a lot of great partners in the community — a lot of people that can offer stuff to IC and a lot of stuff that IC can do for a lot of the agencies here.”

Travis Brooks, deputy director at Greater Ithaca Activities Center, said he is excited to see how the college implements some of the ideas that were discussed at the forum.

“It would be great when the five-year plan is done to see some of the great ideas shared tonight come to life, which tells us as a community that this administration is for real and that things are going to be very different,” he said.

Kirby Edmonds, managing partner at TFC Associates, said he came because he was curious about what the strategic process is and said he was impressed with a lot of the discussions he was part of.

“What I saw tonight was extremely ambitious and I would love to see [it] happen,” he said.

Jason Freitag, presidential fellow and associate professor in the Department of History and co-chair of the steering committee, said he believes the audience members gave the committee a lot of helpful feedback.

“The community is really engaged and there is some great thinking going on,” he said. “We want the relationship between the college and the broader Ithaca area to be a positive one.”

Freitag said one of the ways he believes this strategic plan will be different from previous ones is how it will be implemented.

“One of the things we are trying to do to distinguish this is to make sure that we have a much more dynamic implementation,” he said. “We are thinking about having people constantly assess [if] what we are doing is working and [if] we are moving forward in the right way.”

The steering committee plans on releasing the first draft of its five-year strategic plan at the Board of Trustees’ Spring 2019 meeting and the final draft for the board to vote on during the board’s June retreat. From there, the college will develop an implementation plan during the summer and begin executing the strategic plan in Fall 2019. Cornish said the plan will eventually be released to the public but added that the timeline for doing so has not been finalized yet.