Strike still on despite union bargaining session with college 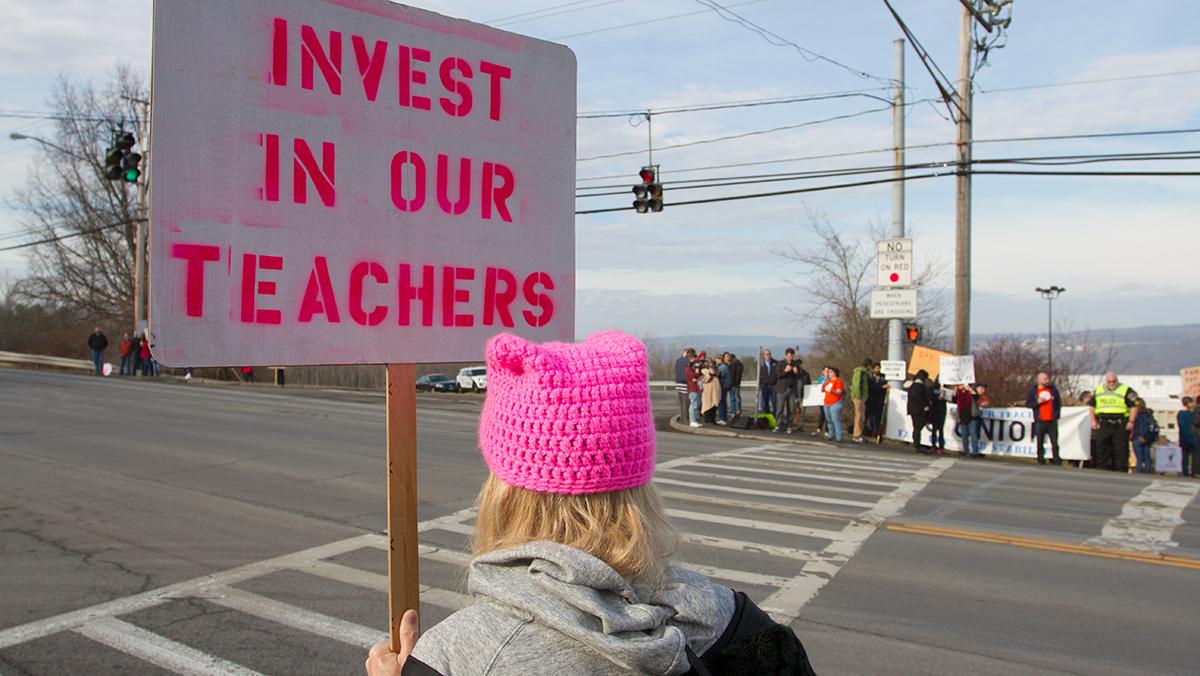 Fernando Ferraz/The Ithacan
A demonstrator holds a sign at a rally held to support contingent faculty in February. The contingent faculty unions met with the administration March 21 for a bargaining session but not enough movement was made to impede the scheduled strike.
By Grace Elletson — News Editor
Published: March 22, 2017

The Ithaca College contingent faculty bargaining committees met with the administration for a bargaining session March 21 ahead of the scheduled strike March 28 and 29. However, not enough movement was made for the strike to be called off.

Rachel Kaufman, lecturer in the Department of Writing, said the session, held from 9 a.m. to 1 p.m., consisted of the unions’ and administration’s trading “supposals,” or unofficial proposals, through the federal mediator. She said no official proposals were passed back and forth but that the union did meet with the administration face to face — something that has not happened throughout the bargaining process for months. Instead, the two parties have been negotiating through a federal mediator, who communicated information back and forth while they sat in separate rooms.

The administration’s bargaining committee posted an update to Intercom on March 21 saying the parties were trying to bridge the gap between the official wage proposals submitted by the part-time faculty and the administration.

Megan Graham, assistant professor in the Department of Writing, was one of the union members to speak with the administration. She said the administration had questions about the full time–faculty union’s proposal for longer long-term contracts.

“We had some discussion that seemed useful on those issues, but we still haven’t seen anything in writing from the administration that takes us on a path to pay parity or that actually creates job stability for full-timers,” Graham said.

The administration said six articles had been tentatively agreed upon for the full-time faculty members’ contract. Graham said that these agreements were verbally agreed upon months ago and that signing them was a clerical matter.

The administration also said it is “very pleased” with the progress that has been made in negotiations so far and that another bargaining session has been scheduled for March 26, two days before the strike.

“The college administration deeply values all of its faculty and has been working to address their concerns while at the same time maintaining the long-term financial viability of the college,” the college said in the announcement.

Graham said the unions are currently organizing details on how the strike will be taking place March 28 and 29. She said there will probably be multiple picket lines in front of the various buildings on campus to encourage students, faculty and staff to join. She said the picket lines will not be impeding anyone from entering the building.

“We hope that the picket lines will help people consider seriously if they want to cross the line and break a strike,” Graham said. “We hope it appeals to their conscience that they wouldn’t want to cross a picket line.”

According to a statement released by the contingent faculty unions, the picket lines will be held from 9 a.m. to 11 a.m. and from 4 p.m. to 6 p.m. both days. Kaufman said at a news conference held March 9 that if the college does not present the unions with proposals increasing compensation and job security for faculty after the first strike, another strike could be organized.

Graham said the union encourages students, continuing faculty and contingent faculty to sign up on the Service Employees International Union website if they will be participating in the strike. She said while unionized faculty members are expected to strike, no one within the union is obligated to strike.