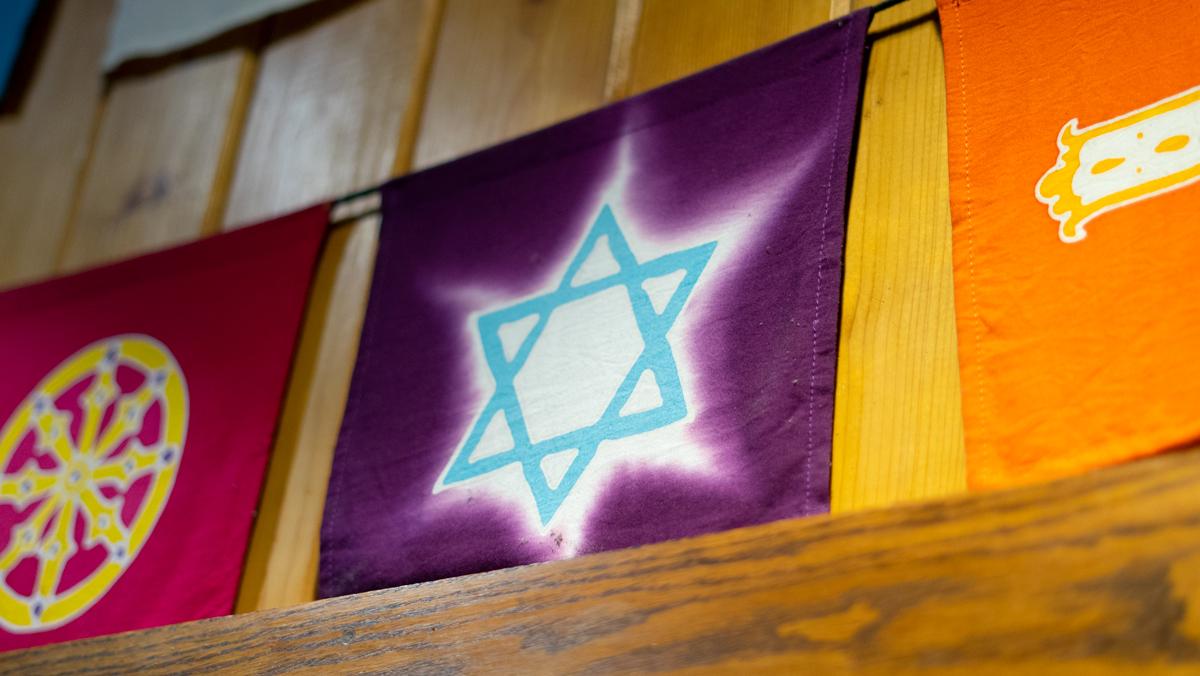 Sabrina Chang/The Ithacan
The Student Alliance for Israel (SAFI) club and Hillel will host the first “IC Loves Israel Day” on April 28 to celebrate Israeli culture. Some students were concerned about the title of the event.
By Krissy Waite — Assistant News Editor
Published: April 17, 2019

The event will be held from 11 a.m. to 2:30 p.m. in both Clarke Lounge and the Dillingham Center and is open to all campus community members, regardless of religious identification. Junior Orian Fitlovich and sophomore Lexi Leitner, co-planners of the event, said the event is a collaborative effort between the two. Leitner said she wanted to bring an Israeli dance class, something she participated in growing up, to the college, and Fitlovich was inspired to create the event by the annual Celebrate Israel festival in Los Angeles. Both Fitlovich and Leitner said that the event is not meant to be in any way a political stance on the state of Israel and that the event is meant to be inclusive to all people and communities at the college.

“It’s just a fun way for people to learn about another part of the world,” Fitlovich said. “Despite the politics of it, there are human beings that live there, and they have their own music. They have their own food.”

The event will take place in two parts. The first part will feature an Israeli dance class taught by Rina Rinkewich, a dance instructor from New York City who specializes in Israeli dance, and will take place at 11 a.m. in Studio Five in the Dillingham Center. The second part will take place from 12:30 to 2:30 p.m. in Clarke Lounge and will have a mix of Israeli music, games, traditional Israeli food and organizations and clubs from both on and off campus will be tabling. IC After Dark and Project Generations will both participate in the day and provide activities for the event. Nonprofit organizations like Save a Child’s Heart, which focuses on providing pediatric cardiac care to children in developing countries, and the Gift of Life Marrow Registry, an organization that focuses on facilitating and collecting bone marrow transplants, will be at the event.

Lauren Goldberg, executive director of Hillel at Ithaca College, said via email that IC Loves Israel Day is an important event to hold because it diversifies cultures on campus and encourages cross-cultural experiences that will improve the campus community. One way Goldberg and the co-planners facilitated inclusion is by inviting several clubs on campus to participate.

“Participating in and learning some of the cultural touchstones of Israeli students on our campus is one way for them to share their heritage with the larger community,” she said via email.

Students for Justice in Palestine (SJP), a student organization focused on raising awareness about Palestinian rights, has raised some concerns about the event. Specifically, SJP is questioning the possible implications of the title of the event. Senior Chris Jones, a member of the club, said he worries that saying “IC Loves” in the title could imply that Ithaca College, a private institution, is taking a stance and endorsing Israel as a state.

The Israel-Palestine conflict has been a major conflict since the 20th century. The conflict is centered around Jewish and Palestinian groups claiming they both have ancestral rights to the same land. A few extremist groups have emerged from the conflict, and there have been mass deaths on both sides, with higher Palestinian death tolls.

Jones said he thinks if there was an “IC Loves Palestine Day,” there would be more concern raised from the community.

“There is more explicit support for Israel on this campus,” Jones said. “This campus is much more Zionist-sided or aligned than it is Palestinian rights. You don’t see many clubs on campus that are for states. It would make more sense if this was ‘IC loves the Jewish people,’ but the fact that it’s ‘IC loves a nation–state’ is strange.”

Don Beachler, associate professor in the Department of Politics, said he believes concerns about the title of the event are hypersensitive and are possibly anti-Semitic. He said the people who would be concerned about the issue are probably not open to having an open discussion with multiple viewpoints.

“We don’t have many two-sided discussions on campus,” Beachler said. “Israel is one of the few examples I know of on this campus where we do have groups that support different perspectives. In fact, it’s one of the few issues on the campus that is adequately addressed and is more like what a campus should be rather than one–sided and propagandistic.”

According to Hillel, a national Jewish organization geared toward college students, Jewish undergraduate students make up 16 percent of the population at the college. Hillel is a co-sponsor of the event. Funding for the event is provided by StandWithUs, a nonprofit and pro-Israel education and advocacy organization based in Los Angeles, according to the co-planners.

Fitlovich said she thinks it is important to have open conversations about the Israeli-Palestinian conflict.

“It’s obviously something that we’ve talked and thought about, … but we don’t want to not do something out of fear because we’re 100 percent willing to open a dialogue,” Fitlovich said. “If someone has questions or concerns and they want to talk to us, we’re there.”

Both Leitner and Fitlovich said the “IC Loves” was mostly a reference to the location of the event.

“If this [concern] came up last week or something before the posters were printed, it would be easier to change it,” Fitlovich said. “It really is not supposed to be speaking for every single person on campus; it’s just the fact that the event is on campus. It really is a celebration of culture.”

“IC loves Israel does not mean that IC doesn’t love everyone else,” Leitner said.

Dave Maley, director of public relations at the college, said via email the title of the event and questions about the title of it fall under several sections of the Student Conduct Code, including the statement of rights and freedom, freedom of inquiry and freedom of expression. He said students and student organizations speak only for themselves, and the college does not necessarily endorse the event just because its name is in the title.

Goldberg agreed that the name was not intended to imply that the college was endorsing or taking a political stand on Israeli politics. She said the event was a way for part of the campus community to share their heritage and culture. She also said it is never Hillel’s policy to speak on behalf of all Jewish students or the college as a whole.

“It was in no way a comment on the campus’s position on Israeli politics, which I know are as multitudinous as the number of people on this campus,” Goldberg said via email. “Even within (or especially within) the Jewish community, you are unlikely to find agreement there, and Hillel at Ithaca College is one organization amongst many on campus that allows IC students to navigate the complicated realities of the larger global community.”

Having grown up in Israel, I remember celebrating the Israeli Independence Day. There were musical performances, dancing, games and fireworks. There was, however, no mention of the history behind the day. I believe the same is true of the celebration on campus. Most people who attend the event probably do not know of the atrocities…

By Junior Ava Carmeli, President of Students for Justice in Palestine | Mar 8, 2012